"Although comparison of GHCHS' current demographic data to the data of other schools in the surrounding community does show differences in the numbers and percentages of students in various subgroups, historical demographics data shows that GHCHS has generally increased its diversity over time. For example, in its current approved charter, the school reported that, since its prior renewal in 2008, it had experienced...a 5.0 percent drop (32.3 to 27.3 percent) in its White student population." 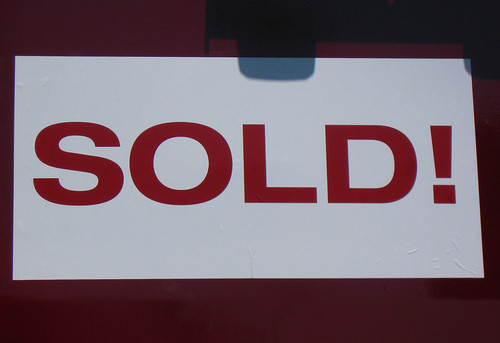 SOLD!
(Image by Matt_Lodi)   Details   DMCA
As the school year begins it is clear that the students of the Los Angeles Unified School District's (LAUSD) public schools are on their own. The charter industry and their allies spent $11,459,786.26 in the last election cycles purchasing a majority of the LAUSD School Board seats and they are now cleared to operate without even the minimal oversight that was previously provided. Under this new regime, the LAUSD's Charter School Division (CSD) refuses to take action against charters, even when presented with evidence of wrongdoing.

In public comment before the LAUSD School Board last June, I provided the District with copies of Granada Hills Charter High School's (GHCHS) "Pre-enrollment Forms". This form requested that parents of prospective students provide copies of Individual Education Plans (IEP) or 504 Plans. This directly contradicts the school's charter which states that "Granada Hills Charter shall not request or require submission of a student's IEP, 504 Plan, or any other record or related information prior to admission, participation in any admissions or attendance lottery, or pre-enrollment event or process, or as a condition of admission or enrollment." (emphasis mine)

In a letter dated July 28, 2018, the CSD informed me that they will not be taking any action to force GHCHS to comply with their charter. While they conceded that "GHCHS requests and obtains at the time of enrollment certain information and documentation", they ignored the very specific language in this charter with the excuse that this information is used "to assist the school in providing an appropriate academic placement and program, and access to resources and services". No explanation was given as to why this information cannot be requested immediately after enrollment. This would accomplish the same result while maintaining compliance with the charter and eliminating the appearance that the charter is dissuading parents from enrolling their children with special needs in this neighborhood school.

As presented to the Board, children with an IEP comprise of 6% of the GHCHS student population. Just 1.7 miles down the road, 14% of Northridge Academy High School's students have an IEP. However, the CSD determined that the "demographic gaps by themselves cannot fairly be considered affirmative evidence of discrimination." Instead, the public must present specific "credible evidence of an intent or act to discriminate against students with disabilities or any other student subgroup." Putting aside the fact that "much of our thinking, laws, litigation and public policy [regarding discrimination] are based on proportionality being the norm", the blatant disregard of the rules regarding enrollment is evidence that GHCHS is actively pursuing policies that can dissuade students with disabilities from enrolling in their school. The demographic data suggests that these policies are having an effect, but the District chooses to ignore this evidence. Is it surprising that the "LAUSD spent $9,888 for every student with a disability, while charters spent $1,291 per student with a disability", a ratio of "7.6 to 1 per student"? Meanwhile, the LAUSD speeds towards bankruptcy.

The CSD's letter concludes by affirming that the GHCHS charter does not allow parents to elect their representative to the school's Governing Board. Unfortunately, this did not address the concerns that were expressed before the LAUSD Board, specifically that the school did not follow the procedures outlined in the charter (interviews were not conducted with all applicants for the position) and that absent an elected representative the LAUSD needs to appoint a member to the Governing Board as allowed by the charter.

It is unfortunate that while reviewing the Governing Board requirements in the GHCHS charter the CSD did not address the fact that, contrary to the charter approved by the District, Granada does not have any teachers who are "currently employed at GHCHS in a certificated position" or a classified representative who is "currently employed at GHCHS" on its Governing Board. Without a material revision from the District, GHCHS eliminated these seats and increased the number of "At Large/Community" members.

The CSD claims that it provides "annual and ongoing oversight", but somehow has missed numerous problems with the management of Granada Hills Charter High School. Their reaction to information that was directly handed to them suggests that perhaps this oversight was intentional. Under a Board controlled by the charters, this problem can only get worse. LAUSD students - you are on your own.

Carl Petersen is a parent and special education advocate and was a Green Party candidate in LAUSD's District 2 School Board race. He was endorsed by Network for Public Education (NPE) Action and Dr. Diane Ravitch called him a "strong supporter of public schools." His past blogs can be found at www.ChangeTheLAUSD.com.

Related Topic(s): Charter Schools, Add Tags
Add to My Group(s)
Go To Commenting
The views expressed herein are the sole responsibility of the author and do not necessarily reflect those of this website or its editors.