In the Beginning was the Word, you dig?

Am I thinkin the same thing I'm thinkin?

I'll ask myself one day and maybe soon

when I'm beside myself: bus stop: blue moon,

waiting to leave the town of Rinky Dinkin

where puppets of the regime caterwaul

do the White Man Stomp through DreamTime afterfall.

In this land of tea kettle tempests, small

minotaurs with mind control have been hired

to maim HaveYouOn faces in the mall.

but has features of ISIS, fade to black.

In the mean time, in a season without hope,

when time has lost its character and bleeds

the wretched waste of "souls" turned to sour weeds,

we lift new epiphanies and paradigms,

and pray to the Sun for a solar flare

that drives us from the hive with sad droned rhymes,

When I went fur burger on Sally Mae

to make her forgive my student debt loan,

it was with catches and, to my dismay,

I owe so much, there's oh so much to pay!

My tongue's become a mattress, where I bay.

'Zebras running in the Serengeti'
(Image by diana_robinson)   Details   DMCA

I had a bowl of fresh flowers in bloom --

naked cheribimbos to mark our fall,

to mock our knowledge and taunt us, and call

after us about Satan's Cain, Abel

had it coming! and deserved his bop doom.

Course, being Satan's, Cain was a psychopath,

a dark Aries who killed a blonde Libra,

a tale that went on to inspire Wagner,

Dark Ages followed and then the Magna,

but you can't change the stripes of a zebra

and Cain took over. Now, you do the math.

Every time I whiff those cherry bimbos

I swoon into a multiverse of limbos. 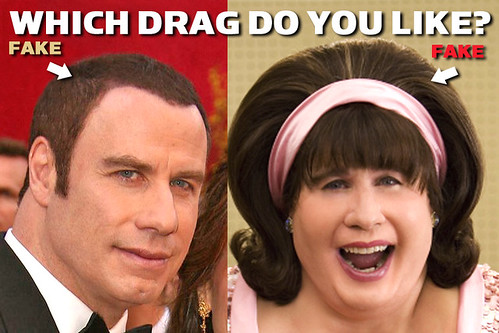 'Which drag do you like? Either way, John Travolta's hair is fake.'
(Image by feastoffun.com)   Details   DMCA

and I'll beat the living sh*t out of you.

steal her, leave me all love's labors lost -- Oooo!

And shitfaced, nothing to show, faith a fraud.

To be honest with you, Sir, I'm lost, lapsed,

Elvis died, then You, dogmatists took over,

and now, I dunno, we seem to hover

between strange, fucked up relativities.

There were times when I worshipped sorrow's gaze

upward into a holy sunlit haze.

I have some kind of cancer and will die

alone and unshriven, but still I laugh

at the unfurled features of my sorrow,

the unspent tears that others want to borrow

like a cup of sugar too bitter to quaff:

I no longer even look at the sky.

If you could see what I've seen of shadows

behind the Plato's Caves of sleeping eyes,

too locked in lucid dreams to wonder why

the Real and the True have passed them all by,

then you would know an emptiness surprise

burrowed in the smile of Rachel Maddows.

I want off this blue thing, I am black

metastasized and won't be coming back.

O Father why have you forsaken me?

Why have you left me among such angeles

of depravity and arbitrary

choirs of vacant monotones who drone

their celebration of lifeless forces,

viral parasites who think that they own

the pelvis, allure of tossed dainties -- I cried

stuck in a mind menagerie, or zoo.

Related Topic(s): Beginning Of The Universe; Chronic Pain; Daily Telegraph; Disturbing_the_Universe; Downs Syndrome; Downsides Of Internet Of Things; Dumbing Down; Fascism-Cant Happen Here; Meltdown; Moody; (more...) Powers That Be; Thats_why_the_lady_is_a_terrorist; The Daily Beast; The Universe; Universe, Add Tags  (less...)
Add to My Group(s)
Go To Commenting
The views expressed herein are the sole responsibility of the author and do not necessarily reflect those of this website or its editors.