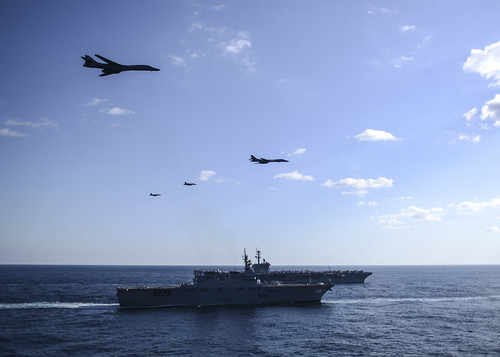 The US Pacific Fleet -- hundreds of billions of dollars flying and sailing in formation
(Image by Official U.S. Navy Imagery)   Details   DMCA

The time has come to cut the US military down to size.

Last November, the Pentagon admitted what critics have known for years: It cannot pass an audit that would let Congress, the media and taxpayers know what it does with the trillions of dollars that have been lavished on war and preparing for war by this country.

By all accounts, the US accounts for more than a third of all global military spending. The next biggest spender on its military, China, only spends a fifth as much as the US. And remember, as a full-fledged police state and a country whose peripheral provinces have to be kept under tight military control lest they move towards independence from Beijing, much of China's huge military is actually involved not in threatening other countries or even defending China, but in maintaining government control domestically. Russia's military spending, which actually declined last year, spends less than tiny Saudi Arabia, which can't even control tiny neighboring Yemen without vast assistance and military aid from the United States.

Let's be honest: The United States faces no significant threat from any nation in the world.

Sure I know: Russia and even China have nuclear weapons that, if launched en masse at the US could destroy this country. But everyone knows such an action would be to commit national suicide. With its vast nuclear arsenal stowed in patrolling submarines, in protected silos ready to be fired off in minutes, and in bases around the world, including some quite close to China's and Russia's borders, the US not only could destroy both countries many times over in response, but is actually able and prepared to attack either country or both countries first, perhaps even preventing them from retaliating successfully (See Michio Kaku's and Daniel Axelrod's excellent and terrifying book To Win a Nuclear War: The Pentagon's Secret War Plans which, using secret US documents, exposes how for decades beginning even before the end of WWII the US prepared and is still preparing for a first-strike, all-out attack to kill hundreds of millions and totally destroy both Russia and China while preventing any significant counter-attack).

The reality is that it is the US which is the most threatening and destabilizing force in the world today. It is US military spending, and the US role as the world's largest arms merchant, selling and giving away more than 34% of all weapons and military equipment in the global arms market to a total of 98 countries, that drives global military spending. Russia, at a puny 22% of all arms sales, is distinctly second rate in the world arms market.

Related Topic(s): Climate Change; Climate Change Deniers; Military Budget; Military Industrial Complex; Military Iraq Casualities; Military Madness; Military Spending US; Peace; Pentagon; Spending Priorities, Add Tags
Add to My Group(s)
Go To Commenting
The views expressed herein are the sole responsibility of the author and do not necessarily reflect those of this website or its editors.