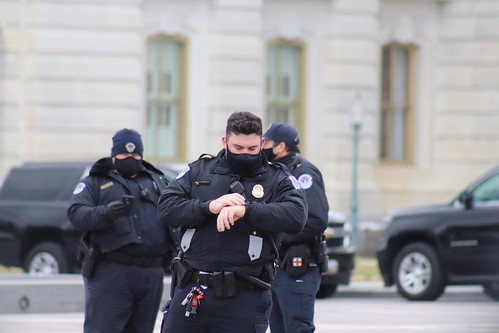 In these pages, on January 3rd, Michael Moore asked an important question. He wondered "Why Are We Not Uprising?" His revolutionary issue was the lack of single-payer healthcare so relentlessly highlighted by the worldwide covid-19 pandemic. Why no revolution, he asked, when so many are dying from clearly remediable causes - when the vast majority of Americans want single-payer?

Response to Moore's article showed that he had indeed touched a revolutionary chord.

But then last Wednesday, when an actual uprising took place, everyone, it seemed, wanted to join hands across the proverbial aisle separating left and right. They jointly lamented the shocking breakdown of law and order. (The "Rising's" Krystal Ball and Sagaar Enjeti provide an example of that shared reaction.)

Think about it, everyone said: the rioters actually "desecrated" the Capitol Building' "sacred" space! They broke some windows. They took selfies of themselves standing at the podium of the House of Representatives. They ransacked poor Nancy Pelosi's office! They forced Mitch McConnell and Co. to run for their lives.

Washington police and Capitol police responded with a wink and a nod.

Related Topic(s): Democratic; Fraud; Progressives; Republican; Revolution; Sandinistas; Trump; Violence; Voting; Workers, Add Tags
Add to My Group(s)
Go To Commenting
The views expressed herein are the sole responsibility of the author and do not necessarily reflect those of this website or its editors.

(You can only use the social login buttons before entering a comment.)
14 people are discussing this page, with 46 comments