I read a few articles last week in the New York Times, and am finally making the time to respond. This health-care debate is really the most important issue that we are facing under this new administration. If we let them get it wrong, we can potentially make things far worse than they already are.


"Senators struggled Wednesday with the possibility that in offering subsidized health insurance to millions of individuals and families, they could inadvertently speed the erosion of employer-provided coverage, which they want to preserve."

This opening paragraph is puzzling to me. As everyone here knows, one of the PROBLEMS with our health care system is that insurance is offered through our employers. It's a problem because all employers are not mandated to offer it and it is not portable when you leave a job. Employer-sponsored health insurance is also creating a HUGE overhead expense, making it difficult for American companies to compete in an ever-growing global economy. Corporations from most other nations have no health care or insurance overhead costs.

So one would think that the best thing we could do in reforming the health-care system in this country would be to move it away from being the responsibility of the employer. Instead, what the Senators have in mind is to FORCE employers to provide insurance for their employees by implementing penalties for those who don't.


"Higher penalties are more effective in preventing the erosion of employer-sponsored coverage, the bedrock of insurance for more than 150 million Americans, the Congressional Budget Office told lawmakers."

Won't this effectively run some of the smaller businesses out of business entirely? Apparently, that is not a problem for our wise Senate. Small business employs a large percentage of workers in this country and is generally a better employer to its workers than the large corporations that can afford to offer insurance. So why is it that the Senate is not concerned about the effect this will have on small business?

And just who is the Senate trying to protect with laws like this? Not small business. Not employers in general. Not the citizenry, since employer-sponsored insurance is not portable and takes all control away from the end user and hands it to the employer. No, it is apparent that they are protecting the insurance industry at the expense of all else.

But no reason is given for that. Over and over in this article it is repeated like a mantra, but no good reason is EVER given for protecting the employer-sponsored system. And if we maintain that framework, what are we really changing?


"Mr. Baucus said he and other senators wanted to minimize the chance that employees 'may be enticed to leave their firms in order to get health insurance in the exchange.'" 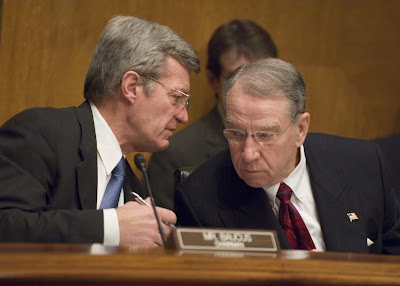 And make no mistake; even if the Congress and Senate are majority Democrats at this time, the changes as currently being discussed for our health-care system are CONSERVATIVE ones, in that they are based upon retaining the status quo over addressing problems with real progressive change. This article proves it.


"The budget office said: 'The availability of subsidized coverage in the new insurance exchange would be an attractive option for many lower-income workers. As a result, some employers would decide not to offer their employees health insurance coverage, opting instead to provide other forms of compensation...In a letter to Congress three weeks ago, President Obama said small businesses "should be exempted" from any employer mandate...'We will give assistance to small business through tax credits,' Mr. Baucus said Wednesday...(However)...When asked about an exemption for small businesses, Mr. Baucus said: 'We talked about it. But how much sense does that really make?'"


"The United States Chamber of Commerce and the National Federation of Independent Business, which represents small employers, said the proposed requirement amounted to a new tax and would frustrate the creation of jobs."

That's a no-brainer. Why would Congress even be considering this plan? It will not improve our health-care system. It will not provide relief to businesses that are hanging on for dear life in this terrible economy. It will not save or create jobs. It will not increase the capability of American companies to compete in the global marketplace. SO WHO BENEFITS FROM THIS PLAN???

In an Op-ed piece titled, The Only Public Health Plan We Need appearing in the same edition of the Times, authors David Riemer and Alain Enthoven state:


"Everyone assumes that a public plan means a government-sponsored insurer that makes payments to doctors and hospitals, whether in the form of Medicare or -- the latest idea -- state-sponsored cooperatives. But Medicare has a dismal record of controlling costs and improving quality, and we lack evidence that co-ops could do any better."

They go on to give no evidence to support that statement and to advocate "a mechanism" that they claim would use "free market forces" to motivate the insurance industry to provide better policies. Even if you believe in the mythical "free market," their claims are shaky at best. They claim that a large enough pool would force the industry to increase quality and decrease cost; however, that claim is in direct contrast to the one they made earlier in the article that Medicare, which insures a huge pool of people, has a lousy record of controlling prices or improving quality.


"An exchange is a key feature of the public plan we'd like to see, but it's only one element. Two other features are needed to give an exchange the power to pressure insurers ... to hold down prices and improve care.
First, the exchange would need to act on behalf of a critical mass of people - at least 20 percent of the insured population that does not already receive Medicaid or Medicare. Only a pool of this size could attract serious bids from insurers. To amass such a large purchasing pool, Congress might need to require that all government employees, or all employers with fewer than 100 employees, join the pool.
Second, the exchange would need to ensure that no subsidies for health insurance, whether provided by employers or the government (through the tax system), exceed the price submitted by the lowest-bidding qualified insurer and benefit package. All individuals in the pool would be free to join any insurer that submits a bid. But enrollees would have to pay out of pocket -- and preferably with after-tax dollars -- any amount above the price of the lowest-bidding plan. "

What they are describing is a system that protects the private insurance industry at every turn. They are basing their ideas on the philosophy that there is currently not enough profit being made to enable the insurance industry to cut costs, which we all know is a load of garbage. They also claim that this would, in turn, force hospitals and doctors to improve the quality of care and lower costs.

Yes, error, waste and inefficiency are a problem, but some of that error, waste and inefficiency is caused by the much larger problem of corporate greed. Corporations are not people, although they are run by people. However, people who run corporations tend to make decisions based SOLELY upon what is best for the corporation and its shareholders, i.e., the bottom line is profit. If you are looking for ways to improve quality and efficiency in our health care system, you would do well to be working with people who have the same goals in mind. And private insurance companies will NOT be on that page with you because their ultimate goal will always be profit.

The error with Riemer and Enthoven's foundational philosophy is that they believe competition will motivate the insurance industry to look for ways to improve quality and efficiency. It won't. Insurance companies will always have a bottom line, a handful of excuses, fingers to point and absolutely, positively, no guilt nor shame about what they have to do to achieve their goals. Actually, past history of "free market' in this country shows that companies from the same industries will collude with each other to set prices at a level that will enable them to obtain a substantial profit for their shareholders. So there really is no motivation for them to improve the quality of the product they are selling.

I am a working-class, middle-aged mother and grandmother from Kansas. My politics lean very far to the left. I am a passionate lover of true Democracy, a true believer in the ideals and vision shared and acted upon by the Founding Fathers (more...)
Related Topic(s): Health; Health Care Universal - Single Payer; Hospital; Jobs; Malpractice; Senate; Senate Legislative Failures, Add Tags
Add to My Group(s)
Go To Commenting
The views expressed herein are the sole responsibility of the author and do not necessarily reflect those of this website or its editors.

WHY LIMBAUGH AND COMPANY WILL NOT GO AWAY

Equal Justice Under the Law; A Constitutional Scholar Should Know