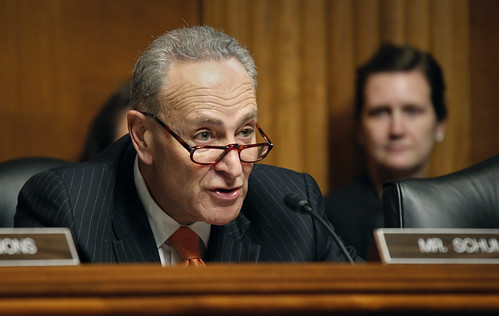 Let me be the first to endorse Doug Jones of Alabama for reelection to the United States Senate in 2020.

With former Tennessee Gov. Phil Bredesen announcing he is running for the Senate in 2018, and Democratic Rep. Beto O'Rourke providing a strong challenge against Sen. Ted Cruz (R-Texas), Democratic control of the Senate and the House of Representatives are now both in play during the 2018 midterms.

A potentially historic Democratic wave is building and growing. It could reach epic proportions if Republican leaders try to force upon voters a lavish and highly unpopular tax cut for the rich that will balloon the federal deficit and raise taxes and insurance premiums for millions of lower-income and middle-class voters.

Schumer first came to my attention when I began working for House Democratic leaders when Tip O'Neill (D-Mass.) was one of the greatest Speakers in history. Schumer was then a young and rising congressman who was widely respected by Democratic leaders as a very skilled and serious legislator with a brilliant political future.

Schumer delivered. He became an influential member of the House, was elected to a seat in the Senate, became highly respected by senators on both sides of the aisle, rose to become the Senate Minority Leader, and has a strong chance of becoming an historically important Senate majority leader after the elections of 2018 or 2020.

Having observed high-level Washington officials at close range for many years, one thing that is noteworthy about Schumer is that throughout his career he has shown the capacity to grow into every job and rise to every occasion. He reminds me of two exceptionally important Democratic senators I was also privileged to work for, Birch Bayh (Ind.) and Lloyd Bentsen (Texas). They rose to great heights and would have made potentially great presidents, as I suspect Schumer would if lightning ever strikes.

The victory of Jones in Alabama, the decision of Bredesen to run for the Senate seat in Tennessee, and the strong campaign of O'Rourke against Cruz in Texas have markedly raised the prospects for Democrats to regain control of the Senate -- and make Schumer majority leader -- after the upcoming midterm elections.

As Schumer called for Wednesday, Senate Majority Leader Mitch McConnell (R-Ky.) and House Speaker Paul Ryan (R-Wis.) should wait until Jones assumes his Senate seat before moving the highly unpopular tax bill to final passage. Once Jones is sworn in, which should happen as soon as possible, the small and shrinking GOP majority will make it untenable for McConnell to continue to run the Senate like a one-party state and govern with GOP senators alone.

The election of Jones creates a seminal and defining moment for the Senate. McConnell and Ryan should step back, think carefully, negotiate with Democrats, rewrite the tax bill, do it right, and avoid the economic disaster the bill could create for the nation and the political disaster it will cause for Republicans.

Schumer is on the march. He has always been ready and willing to negotiate with Republicans fairly, in good faith, and in the historic tradition of the Senate.

Schumer believes in the vision of the Senate that the Founding Fathers conceived and the American people demand. He has the great leadership skills, and the very popular high ground on leading issues, to carry the fight to the country to end the abuses of congressional Republicans during the Trump presidency, as Alabama voters ended the seamy saga of Roy Moore's ill-fated campaign for the Senate.

Related Topic(s): Democratic; Issues; Republican; Schumer-Charles; Senate; Taxes, Add Tags
Add to My Group(s)
Go To Commenting
The views expressed herein are the sole responsibility of the author and do not necessarily reflect those of this website or its editors.