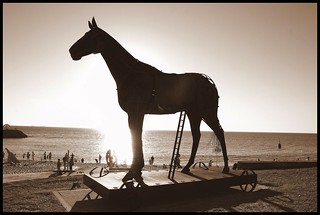 One of the most revolting recent Republican responses to the Flint, Michigan water crisis was made by Jeb Bush, when he said that the problem was "too much regulation." This was pushing the Right's mantra about the wonders of a "free market" shorn of all regulation to a truly horrifying extreme. The children of Flint were poisoned forever by officials' refusal to follow federal regulations about protecting the city's water supply from corrosives in the Flint River. Their motive? They said it was saving money. But the cost of dealing with poisoned children will be astronomical in every sense. Today all "regulations" that protect Americans are at risk from the Right's "free market" Trojan horse--"the free to lie, cheat, and steal market." We must take on that phony horse now.

How best to do that? Just explaining in wonkish detail what the corporate oligarchy, the Right wing, or even professional academic economists really mean by "free market" is a non-starter today. Of course, the Right's got that powerful American story word "free" on their side. But we have an equally powerful American story word in "fair." That's just one word though. We need to tell the whole "fair market" story ourselves to overcome their "free-to-lie, cheat & steal market" push.

To get our "fair market" message out there, we need smart American catchphrases and snappy metaphors familiar to the public. That's why I'm suggesting we progressives demand a "fair market," to replace our current "free-to-lie, cheat, and steal" market. A fair market is something that all Americans deserve, and it's truly American. Fairness is one of our highest values as a people. Moreover, a fair market is one where buyers and sellers all play by the same rules, no matter who they are. It's a market which is truly a level playing field and provides equal opportunity for all. It's one where the rules are set by fair and impartial "referees," representatives of all the people, not lobbyists for less-than-honest corporations and Congress members in their pay. The rules of a "fair market" protect the health, safety, and economic opportunity of all Americans. A fair market at home is also what's needed to create fair trade abroad. That's trade that won't sell out our own working people and force all countries to poison the air, water, and soil we humans need to survive on this planet.

More evidence that the "fairness" story works for all Americans comes from a surprising source. As reported in the recent New Yorker piece on the Kochs, a political advisor of theirs put it this way: "Americans almost universally believe that fairness matters. . .Americans overwhelmingly believe that it's right to help the vulnerable." Judging from that account, the Kochs apparently didn't really "get" that advice, or couldn't stomach it, because they went for a "happiness" frame as their own Trojan horse of choice (the "Bridge to Wellbeing" is their "economic freedom" metaphor). But they are still the most dangerous actors in American politics today when it comes to telling a deceptive "free market" crime story, because they are now keenly aware of how important framing is.

As for professional economists, most of them have been pushing the wonders of "free market," deregulation at home, or "free trade" abroad for many years. Many are also in the corporate pocket, as Charles Ferguson's 2011 film, Inside Job, showed, or they are just not that into everyday reality or everyday American workers. As James Surowiecki has just written in the February 22nd New Yorker about "free market's" twin sister, "free trade:" ". . .free trade has created major winners and major losers in the U.S. economy, and the losers--mainly blue-collar workers--have received little or no help." Speaking of our outsider candidates Sanders and Trump, he adds, "By focusing on trade, though, both [outsider] candidates are acknowledging something important: what has happened to U.S. labor was not a natural disaster, but, in part, the product of government policies designed to accelerate globalization and expose American workers to foreign competition. "

Elizabeth Warren has long been saying our economic/political system is rigged, and we know it. The question is what do we the people do about it? What will really work? Unfortunately, as I said, honest economic analysis, progressive policy proposals, and campaign rhetoric aren't enough. We the people must tell the "fair market" American story everywhere ourselves, if we are going to block their corrupt "free-to-lie, cheat & steal market"push.

Susan C. Strong, Ph.D., is the Founder and Executive Director of The Metaphor Project, http://www.metaphorproject.org, and author of our book, Move Our Message: How to Get America's Ear. The Metaphor Project has been helping progressives mainstream their messages since 1997. Follow Susan on Twitter @SusanCStrong.