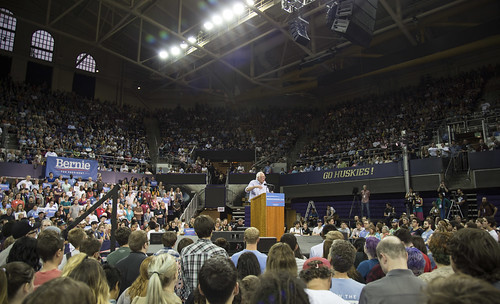 I keep reading that polls show young people - the so-called Millennial Generation aged 23-38- are overwhelmingly backing Bernie Sanders in the race for the Democratic Party's presidential nomination (along with even younger voters) while the so-called Baby Boom Generation of people now aged roughly 55 to 75 are going for Joe Biden, Mike Bloomberg or some other ossified mainstream Democratic pol.

Speaking as a 70-year-old Baby Boomer myself, and increasingly an admirer of Sanders, I gotta ask: OK Boomers, what's happened to you?

Think back: What were you doing back in the late 1960s when you were in your teens or early 20s as the Civil Rights Movement was finally winning the right to vote for Black people, when the Vietnam War was raging and classmates of yours were coming home in body bags? Where were you when President Nixon in 1970 urged Ohio Republican Governor James Rhodes to send the Ohio National Guard onto the Kent State Campus to put down a student protest against his illegal invasion of Cambodia, expanding an ugly war to yet another country, and the "heroic" guardsmen shot and killed four unarmed students? Where were you when we were all shattering the walls of prudery, experimenting with sex, the mind-freeing wonders of marijuana and yes, even LSD? Where were you as women and their male supporters suddenly stood tall and said that just having the vote wasn't enough; they demanded equality with men on the job, in the home, in politics and in their relationships?

We Boomers have been maligned in the media and by politicians since back when we were wearing bell-bottom jeans and sandals, when women were putting flowers in their usually long or frizzed-out hair, and when any guy with the slightest facial hair grew a beard or at least a mustache (lately, the attackks are that we're keeping jobs from young people by not retiring, or that we're hurting our children's retirement future by opposing any cuts in our own benefits!) More importantly we were marching against war, against nuclear weapons and arms spending, and condemning the empty consumerism of our parents. In obtaining our attire from thrift stores and traveling the roads by thumb, we were challenging the premise of capitalism itself, saying that it wasn't the trendiness of what you owned that defined you, it was what you stood for.

And we were, for the most part I would argue, happier and freer than we are today.

Somehow, in the intervening years since the victory of the Vietnamese over the country's US invaders, the impeachment hearings and resignation of Nixon, the end of the draft, passage of the Voting Rights Act and creation of Medicare and Medicaid, and the at least partial liberation of women, we've lost our way. We got married, raised families, fretted over the size of the IRA and 401(k) plans we and our weakened trade unions if we still had them, were forced to rely on instead of the real pensions workers in an age of stronger unions used to have. And even worse, we became consumers instead of people, morphing into better-off versions of our own parents. Some of us even became Republicans or Neo-liberal Democrats, worried more about our own gain than about those who were being left behind or crushed by what we used to call the "System," and ignoring what our nation was and still is doing to the world.

During all these intervening years, as we've lost our way, Bernie Sanders has stayed the course. Four years too old to be officially a Baby Boomer, Sanders, born in 1941, hails from that demographic cohort that, during the Nixon years, to its undying disgrace, came to be known, and even to self-identify, as the Silent Generation consisting of those born between the wars or during WWII. Sanders, though, has never been silent. He protested and faced arrest as a student defending the rights of American blacks and opposed both US apartheid and the Vietnam War. He then entered politics as a socialist, winning election as mayor of Burlington, VT (which under his leadership become known jokingly as "the People's Republic of Burlington" " and admiringly as one of the best US cities to live in). Later he moved on to Congress, first as a representative and then as the state's junior senator - a position he still holds.

Bernie Sanders, my fellow Boomers, is the person we had intended to be as we grew older and wiser: Obstinate and outspoken defenders of the downtrodden, rejectors of consumerism, and advocates of the notion that we all are better off when we demand that government help those who are the neediest, not those who are the most wealthy and powerful. Sanders may have on occasion failed to remember our Edwin Starr mantra "War: What is it good for? Absolutely Nothin!," but he seems to be coming around to that view again in this race for the presidency.

We Boomers as a group need to do the same. In fact, those of us who are not supporting Sanders in this coming election year need to do some soul searching about who we really are and what we really stand for.

Maybe my insurance plan (at a significant cost ) is really great , but that is no reason for me to oppose expanded and improved Medicare for All as proposed by Sen. Sanders. Not only would Medicare for All cost me a lot less than I pay now for healthcare coverage, but with Medicare for All I would know that everyone else in this nation - all my fellow citizens - would have the same access to free high-quality health care as me.

Maybe if the government subsidized the installation of point-of-use electrical generating equipment (wind, geothermal or solar panels) on all US homes, I'd be paying higher taxes, but our air would be vastly cleaner, our cars would all be electric and virtually cost-free to drive, and we'd no longer have power bills from climate-change-inducing and pollution-causing power plant operator. A Green New Deal that promises to find jobs for those displaced by the urgent shutdown of greenhouse gas polluters, as advocated by Sanders, even if jarring for some, would be good for everyone.

If we ended our national imperial policy of endless wars and slashed military spending, maybe the US military and the arms industry would lay off a lot of people, but Americans would be viewed a lot better by the rest of the world, and our nation would be able to spend a trillion dollars a year or more in productive rather than destructive ways - like engaging in a crash program to save the earth from human-caused mass extinction.

Related Topic(s): 2020 Elections; Bernie Sanders; Bernie Sanders Presidential Campaign; Bernie Sanders Supporter; Corporate Media; Michael Bloomberg; Sanders-Bernard, Add Tags
Add to My Group(s)
Go To Commenting
The views expressed herein are the sole responsibility of the author and do not necessarily reflect those of this website or its editors.