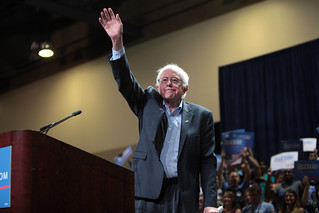 Despite a narrow loss in the Nevada presidential caucus on Saturday, Bernie Sanders is not slowing down, and neither are his supporters.

A report filed over the weekend with the Federal Election Commission (FEC) shows the senator from Vermont has received more than four million contributions, raising a total of $94.8 million through January 31st after his campaign launched last April.

"What this entire campaign has been about has been the issue of momentum and bringing more and more people into the political process," Sanders told a crowd of 600 after the caucus, adding, "we will not allow billionaires and their super PACs to continue to buy elections in the United States of America."

With less than a week to go until the next Democratic primary in South Carolina, Sanders told CNN on Sunday that the Nevada loss still proved how much progress his campaign has made in just a few short months.

"The truth is that for a campaign that started out as a fringe campaign at 3 percent in the polls we have enormous momentum," Sanders told CNN's Jake Tapper. "You have noticed that one of the recent national polls actually had us ahead of Hillary Clinton, in state after state her margin is narrowing. So I think people are responding to our message of a rigged economy where ordinary Americans work longer hours for lower wages and almost all new income goes to the top one percent."

And in a press release on Saturday, Sanders noted that he received 47 percent of the vote to Clinton's 52 percent after trailing by as many as 50 points in Nevada in prior months.

Sanders was bolstered by growing support from Latino caucusgoers, winning 54 percent of their vote in Nevada, which he said was a key factor in making up so much ground.

The results show that "Clinton's firewall with Latino voters is a myth," said Arturo Carmona, Sanders' deputy political director. "The Latino community responded strongly to Bernie Sanders' message of immigration reform and creating an economy that works for all families. This is critically important as we move ahead to states like Colorado, Arizona, Texas and California."

However, Sanders also acknowledged to CNN's Tapper that his campaign did not win over black voters, which will be critical in upcoming primaries.

"I think the more the African-American community hears our message on a broken criminal justice system -- which has more people in jail today than any country on earth, largely African-American and Latino -- when they hear our message of an economy that represents all of us, not just the 1 percent. I think you're going to see us making progress there as well," Sanders said.

The senator held a rally in Columbia, South Carolina on Sunday, where he currently trails Clinton by more than 20 points. Speaking with CBS from the ground, he acknowledged the uphill battle he faces in winning over new voters who may be unfamiliar with the once-fringe candidate.

"I think when the African-American community understands my record on criminal justice, my record on economics and the agenda we're bringing forth, raising the minimum wage to $15 an hour, dealing with the fact that we have more people in jail, shamefully, than any other country on earth, that I am against the death penalty, Secretary Clinton is not," Sanders said. "I think as people become familiar with my ideas, we are going to do better and better."

commondreams.org is a progressive publisher
Related Topic(s): Bernie Sanders; Democratic; Primary; Southern Strategy, Add Tags
Add to My Group(s)
Go To Commenting
The views expressed herein are the sole responsibility of the author and do not necessarily reflect those of this website or its editors.