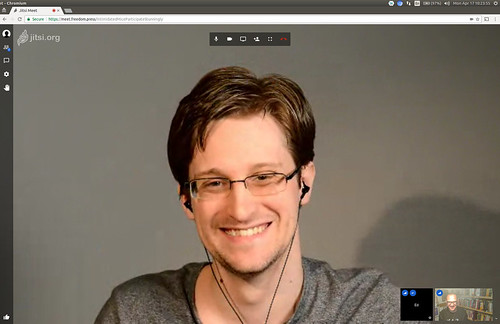 I've decided to publish a new series of pieces based on my readerly responses to Ed Snowden's 2019 memoir, Permanent Record . It's chock full of ethical goodness and mental nutrition. Since the US government has seized its profits, the book has lost its allure and marketability (only in America). But it really is a telling book that I've learned much from and have returned to. In this series, I'd like to highlight individual aspects of his tale that I found worth returning to and/or could personally relate to. There are several aspects I continue to ponder.

Edward Snowden's memoir, Permanent Record is a crackerjack of a book. Although, while reading it, I sometimes felt he was writing in code, maybe reaching out to vulnerable spooks he left behind. He'd say things in such a way that there seemed to be a didacticism at work. Like he was teaching us something. I admit, I didn't always get what he was on about. But then, I'm a proud founding member of DENSA, the organization that's the opposite of MENSA (to which I once belonged.)

Anyway, speaking of education, recently I was reading an article about African-American educational slippage during the pandemic. It wasn't easy for anybody in education during the worst, safe-distance months, when nobody really knew what to do except close schools down, and hit the social media to spend hours whinging and cavorting. But, as bad as it was for many families with means -- middle class families with stable jobs -- none suffered like the poor during the pandemic, and Black families, more than other poor families, were even harder pressed. Plus, there was the rage and disrupting influence of BLM, antifa, and Black males, even after George Floyd, who just couldn't seem to find a way to not get arbitrarily murdered by white coppers in America.

The New York Times describes the decline in "Black Families Were Hit Hard by the Pandemic. The Effects on Children May Be Lasting." They point mainly to discrepancies in income and consequent available services, such as the Internet, where educational programming was still abundant, if you had the streaming facilitation at hand. Quality internet provision is another thing the Mighty Whitey takes for granted. As the Times puts it,

Black children are also being left behind in the education system at all levels. For children from pre-K through high school, both Broady and Hardy said uninterrupted access to the hardware and internet necessary to successfully participate in online learning is another huge concern. According to data from Pew Research Center, even before education went fully digital because of the pandemic, Black and Hispanic students were unevenly affected by the lack of access to high-speed internet services.

I read another article from Columbia University that laid down similar trends.

Yes, the pandemic has exacerbated the existing stressors -- succeeding in school proves to be even harder when there is no school to attend, but a high school education is the minimum requirement for success in a modern technologized society. It used to be that you could find a job with a high school diploma; then you needed a BA to get somewhere; then a Masters; then a PhD; and now, some folks believe you need two PhDs to compete in some fields.

Related Topic(s): Alternative; High School; High School Dropouts; High School Examination; Higher Education; Memoir; Part Time Work; Participatory Democracy; School; Snowden, Add Tags
Add to My Group(s)
Go To Commenting
The views expressed herein are the sole responsibility of the author and do not necessarily reflect those of this website or its editors.

STAY IN THE KNOW
If you've enjoyed this, sign up for our daily or weekly newsletter to get lots of great progressive content.
Series: "Secrets of Snowden's Memoirs"