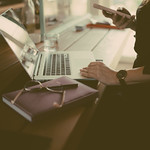 Close up of woman using mobile smart phone in her office.
(Image by shixart1985)   Details   DMCA

Like Uber for Academics? Low-paid, on-demand faculty were hired as temp workers by an internet firm.

When faculty at the Oregon Institute of Technology went on strike on Monday, April 26th, the university handed over instruction in online courses to adjuncts hired through a third party. Two visions of the possible future for academic work are revealed: on the one side, that of the unionized faculty, who seek to "preserve the university's traditions of shared governance, small class sizes and hands-on instruction" along with pay on par with other Oregon universities; and on the other, a precarious, untrained, and ultimately disposable facultariat, hired on-demand over the internet.

News of the working conditions of strikebreaking adjuncts, and their impact on the classroom, was broken on Friday with a press release from the Oregon Tech faculty union, and on the twitter feed of the OIT Students For Faculty. Research by the faculty union and allied students, along with statements by adjunct faculty hired as strikebreakers, bring to light the following allegations:

This screenshot of an alleged hiring document which adjuncts received a few days before beginning work indicates that classes are 'in progress,' but makes no mention of the strike.
(Image by Confidential)   Details   DMCA

According to adjunct faculty who corresponded with me (and who are unwilling to share their names due to fear of retribution), they were hired through an online process that involved submitting a resume, completing an availability survey, and signing a contract. No interviews were conducted, nor were official transcripts asked for - standard steps in establishing that faculty have the credentials and expertise to teach effectively.

This screenshot of an alleged document shows some details of the on-demand 'staffing instance' hiring method for adjunct faculty.
(Image by Confidential)   Details   DMCA

Screenshots of hiring documents that were shared with me show the radically on-demand working conditions. Instead of being hired per course, faculty are hired for "staffing instances" lasting two weeks at a time. According to the contract, Focus EduVation would notify faculty at the beginning of each staffing instance, if they are to continue work; lacking any such notification, they are effectively laid off. Focus EduVation can also ask faculty to "withhold undertaking" assigned tasks at any time, and then prorate the pay for the portion of the "staffing instance" that was completed.

In other words, Faculty EduVation has created an extremely flexible academic workforce, which can be hired and fired almost instantaneously. Clearly, this is designed to create strikebreakers who can fill in for an unknown length of time; but if such a model were adopted more broadly, the impact on faculty working conditions, not to mention classroom learning, would be troubling. The Students For Faculty twitter feed has documented several instances of adjunct faculty professing an inability to teach the assigned classes, and/or quitting upon learning that they were strikebreakers. Those who continue in the classes, of course, will be simply let go as soon as a contract is signed and the strike ends.

Focus EduVation's hiring model seems designed to take advantage of the internet's reach to draw from the vast pool of faculty who have found themselves furloughed, laid off, and unemployed during the pandemic. However, adjuncts I spoke with felt that the on-demand, gig-economy-style hiring process, along with the lack of communication by the company, has brought them to a new low. As one adjunct put it:

"I knew I was being hired as an adjunct, but I didn't ever agree to be a scabjunct! I'm not willing to cross a picket line, not even virtually."

Neither Oregon Tech nor Focus Eduvation have responded to my requests for comments. The OT-AAUP faculty union provided this statement:

It's shameful and embarrassing for Oregon Tech's senior administration that, in trying to go around faculty who are standing up against exploitation from that same senior administration, the university would contract with a company that so obviously exploits temporary faculty. Students have been posting their exchanges with replacement instructors on Twitter at https://twitter.com/OIT4Faculty, and their documentation shows again that replacement instructors were not told that this was a strike, were possibly misled that this was COVID-related, and/or that they don't have the appropriate qualifications (and some clearly asked to be removed from teaching classes because of this). Students deserve better and faculty--whether full-time, part-time, or contingent--deserve better.

Related Topic(s): Exploitation; Exploitation; Online; Online Courseware; Online Education; Online Internet Business; Strike; Students; Teaching; Technocrats; (more...) Technology; Uber; Work, Add Tags  (less...)
Add to My Group(s)
Go To Commenting
The views expressed herein are the sole responsibility of the author and do not necessarily reflect those of this website or its editors.