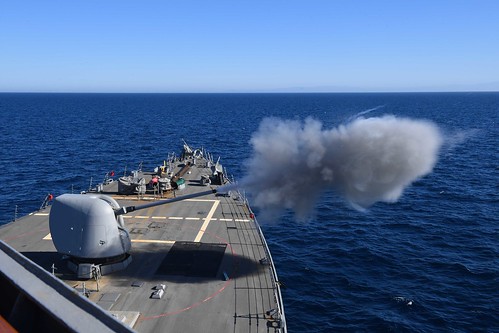 This article was first published on World Beyond War.

Top Russian officials are concerned that a bill passed by the US Congress will do more than increase sanctions on North Korea. Moscow claims H.R. 1644 violates its sovereignty and constitutes an "act of war."

On May 4, 2017, House Resolution 1644, the innocently named "Korean Interdiction and Modernization of Sanctions Act," was quickly passed by the US House of Representatives by a vote of 419-1 -- and it was just as quickly labeled an "act of war" by a top Russian official.

Why was Konstantin Kosachev, chair of the Russian Senate's Foreign Affairs Committee, so alarmed about a US law ostensibly aimed at North Korea? After all, there had been no blistering partisan debate preceding the vote. Instead, the bill was handled under a "suspension of the rules" procedure usually applied to noncontroversial legislation. And it passed with only one dissenting vote (cast by Republican Thomas Massie of Kentucky).

So what did H.R. 1644 call for? If enacted, the bill would amend the North Korea Sanctions and Policy Enhancement Act of 2016 to increase the president's powers to impose sanctions on anyone in violation of certain United Nations Security Council resolutions regarding North Korea. Specifically, it would allow for expanding sanctions to punish North Korea for its nuclear weapons programs by: targeting overseas individuals who employ North Korean "slave labor"; requiring the administration to determine whether North Korea was a state sponsor of terrorism and, most critically; authorizing a crackdown on North Korea's use of international transit ports.

What caught the eye of Russian critics was Section 104, the part of the bill that presumed to grant the US "inspection authorities" over shipping ports (and major airports) far beyond the Korean Peninsula -- specifically, ports in China, Russia, Syria, and Iran. The bill identifies more than 20 foreign targets, including: two ports in China (Dandong and Dalian and "any other port in the People's Republic of China that the President deems appropriate"); ten ports in Iran (Abadan, Bandar-e-Abbas, Chabahar, Bandar-e-Khomeini, Bushehr Port, Asaluyeh Port, Kish, Kharg Island, Bandar-e-Lenge, Khorramshahr, and the Tehran Imam Khomeini International Airport); four facilities in Syria (the ports at Latakia, Banias, Tartous and the Damascus International Airport) and; three ports in Russia (Nakhodka, Vanino, and Vladivostok). Under the proposed law, the US Secretary of Homeland Security could use the National Targeting Center's Automated Targeting System to search any ship, plane, or conveyance that has "entered the territory, waters, or airspace of North Korea, or landed in any of the sea ports or airports of North Korea." Any vessel, aircraft, or vehicle found in violation of this US law would be subject to "seizure and forfeiture." House Bill Raises a Red Flag for Russia

"I hope [this bill] will never be implemented," Kosachev told Sputnik News, "because its implementation envisions a scenario of power with forced inspections of all vessels by US warships. Such a power scenario is beyond comprehension, because it means a declaration of war."

Gar Smith is a Project Censored Award-winning reporter and is co-founder and editor of Environmentalists Against War and the author of Nuclear Roulette.
Related Topic(s): Russia And China; Russia Bashing; Senate; Senate Armed Services Committee, Add Tags
Add to My Group(s)
Go To Commenting
The views expressed herein are the sole responsibility of the author and do not necessarily reflect those of this website or its editors.

I've Had It with These Masked Thugs

If Corporations Are People, I'm All for DOMA