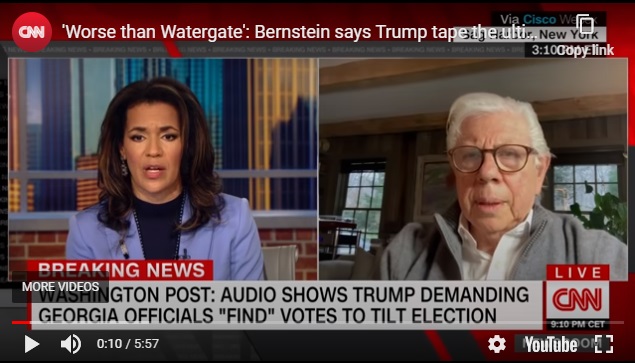 Only 3 days ago, I wrote a cautionary note regarding the continuously festering and evolving agenda of a newly emergent Confederacy, aiming to restore white supremacy, slavery (in its modern incarnations), bigotry and overwhelming domination of the 99% by the 1% moneyed class. It focused on the re-invigoration of all the basic components of divisive and hate-based gangs, from the KKK down to the Proud Boys and QAnon, Fox News and Newsmax, and the various armed militia and fringe groups energized by the hideous Mafioso leader whose 4-year long rampages in DC have led to never-ending social, political and economic disasters in this country.

I had added to words "watch the next few days" in my heading for the article, bearing in mind the deeply troubling issues hanging around the Georgia Senate elections (with the US Senate majority on the line), and of course the revolting criminal efforts to subvert the recent POTUS election, a grotesque drama going on now for 2 months, aided and abetted by a sizable number of the R-party muscle-heads, in complete defiance of decency, decorum, and even a shred of regard for the rule of law, the Constitution or (whatever fragile version of it exists) democracy. The latter concern stemmed from the impending (fabricated) showdown in the US Congress relating to certification of the already-certified state electors.

Little did I know 72 hours ago that my cautionary pronouncement regarding "watch the next few days" would prove to be so profoundly prescient. Sunday morning came the flurry of reports and subsequent commentaries about "the tape"- the 1-hours recording of the mobster Don pressuring the Georgia Secretary of State Brad Raffensperger, in perfectly transparent terms, to fabricate a "recount" (note that Georgia had recounted 3 times, including once by hand, and all their officials, mostly of the R-party, and courts, had certified the results in favor of Joe Biden), and to (a powerful, significant word) "find" the Don exactly 11,780 votes, one more than the criminal-in-chief needs to overturn the people's electoral verdict.

There is no room here for any ambiguity; the Don (many regard him a mental lightweight, and rightly so; but his capacity for evil is immeasurable) has laid out his criminal actions (at both state and federal levels) in screamingly clear terms. The litany of lies is combined with veiled and not so veiled threats, mafia-style ("you want to do the right thing," "you are a pretty good lawyer, right?" "you have a nice last name" (MRC: i.e., you do not want any of this to come to harm, do you? Do you, now?), "find the right people" (MRC: read that as "go and find the right people to do the fix like I tell you"), and of course the most resounding give-away- asking for exactly 11,780 (fabricated) votes to give the ghastly criminal a victory by 1 vote.

The fact that neither the Secretary of State nor his attorney acceded to these openly criminal coercions has of course been lauded by many, and I feel the same way (much as one must laud the justice system, at least in the matter of the Don's sustained criminal efforts to bring numerous cases in state after state, only to be summarily shot down by the judges of either political shade, led by his criminal collaborators, Guiliani, Powell, and propagandizing by the non-stop, shameless lying machine, McEnany, the revolting duo of Pence and Pompeo, and so many others). However, what is actually quite scary to speculate is something one of the commentators brought up (I think it was someone at MSNBC, an outfit among other MSM megaphones which since the illegal/inhuman Iraq rampage started in 2003 I have boycotted, but of late, under the mafia-criminality at home by the Don, several of these have started to show at least a degree of objectivity and a modicum of journalistic merit). It is clear that even if the Don were to manage getting the Georgia election criminally overturned using his strong-arm tactics- its 16 votes would not change the election outcome. It would only make the outcome shift to (however illegally and unethically) to (306-16), i.e., 290 Biden to (232+16), i.e., 248 for the Don.

Hence- one may speculate that if, say, the 16 electoral votes from Georgia were actually to throw the election in the Don's basket- can we be absolutely certain that these R-party state operatives, who had previously hugely collaborated with the Don on many matters like so many other lapdogs, have still demonstrated the kind of integrity we have seen here? The picture could be very different, and they might very well have become engaged full-steam in the subversion. A very worrisome thought indeed.

Among many commentators, two particularly honorable and high-integrity individuals have spoken with justifiable passion and concern about this palpable criminal evidence. Carl Bernstein (CB), whom I respect enormously not only for the great work he did to uncover the Watergate crime (while his other counterpart, Woodward, has proven to be a money-grabbing opportunist who has only worked to line his pockets, and has fallen into a disreputable abyss), has just described the Don's Georgia tape as "far worse than Watergate" and has called upon the fascist R-party leadership to do the right thing, and bring this mega-criminal up for impeachment and removal. Here is a YouTube link to CB's commentary (a still from which is appended near the top):

CB points out how the R-party (which still had some honor in its psyche pre-Ronald Reagan) leaders had risen up against Nixon after the Watergate revelations, and effectively brought about his resignation. Bernie Sanders (BS) likewise has urged that this direct criminal assault upon US democracy (what there is of it), and solicitation of criminal subversion of a national election by recorded coercion deserve immediate investigation and prosecution.

Once again, even as the Confederacy promoters and shameless, anti-democratic R-party House and Senate cabal, despite this latest, explosive revelation, continues on its disgraceful effort to "object" to the certified state electors on Wednesday, January 6th (with not a single one of these subversive traitors changing their position at the time of this writing, close to midnight on Monday the 4th), I close by stating that I do not expect the defanged, spineless, unprincipled US Congress to take any action on this open-and-shut case of criminal action by the horrific, revolting Don. Who knows? Maybe they will prove me wrong.