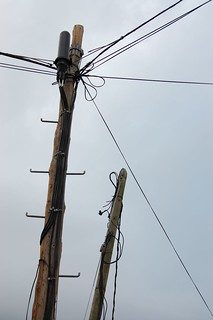 First, the bad news: The FCC is apparently preparing for landline extinction.

Please read Jacob Kastrenakes' July 10, 2015 blog, "Getting rid of copper lines has consequences, and the FCC wants you to know them."

The FCC will vote about emergency backup power provisions for cell phones in August, 2015. As far as I know, the FCC never called for Comments about these provisions.

Dr. Gary Olhoeft pointed out to me that big users of landlines include doctors, insurance companies, title companies, and others who use faxes to protect their clients. What will these folks do when landlines are eliminated?

Now, the encouraging news: Norm Alster, a journalism fellow at Harvard's Center for Ethics, has published Captured Agency: How the FCC is Dominated by the Industries It Presumably Regulates. In the book, Alster reports that in April, 2015, he asked 202 people how likely it is that the US Congress forbids local communities from considering health concerns when deciding whether to issue zoning permits for wireless antennae.

Only 1.5% of respondents considered this likely to be true.

This means that the vast majority of people are unaware of Section 704 of the 1996 Telecommunications Act, which states that no health or environmental concern may interfere with the placement of a cell tower.

When Alster asked respondents if risks to health (including brain cancer) caused by cell phones were identified, would they restrict their mobile-phone use and get a landline?

The majority said that they would.

This means that the majority of people currently do not know that using mobile devices causes harm.

I actually find this survey encouraging--and challenging: if people become informed about The Telecom Act's Section 704, and about the dangers of exposure to EMR from wireless technologies, then significant numbers of people might, at least, reduce their use.

The challenge remains in educating people. How do we provide information so adults and children think it's their own idea to reduce use and exposure?

Katie Singer writes about nature and technology in Letters to Greta. She spoke about the Internet's footprint in 2018, at the United Nations' Forum on Science, Technology & Innovation, and, in 2019, on a panel with the climatologist Dr. (more...)

Related Topic(s): Activism Environmental; Cell Phone; FCC; Fed Regulatory Agency FCC; Health; Phone -s Service; Technology; Telecommunications, Add Tags
Add to My Group(s)
Go To Commenting
The views expressed herein are the sole responsibility of the author and do not necessarily reflect those of this website or its editors.

Offering thanks for what sustains me--and a batch of questions