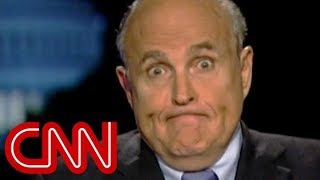 The blessed lack of statements from Rudy Giuliani has been broken by a snarling mess of un-reason balled up and delivered by the specialists in packaging frothing conspiracy theory at the Daily Caller (ahem ... not linked). In this Jenga column of illogical blocks, Donald Trump's personal attorney argues that Congress can't impeach Trump over either abuse of power or obstruction of Congress, because those are not crimes. They're just violations of the Constitution. And impeaching Trump for violating the Constitution would be unconstitutional.

In fact, it would be so unconstitutional to impeach Trump for an unconstitutional act that Giuliani thinks the Supreme Court should step in to halt the impeachment. Even though he acknowledges that that is ... not in the Constitution.

Indeed, the Constitution is silent on the Supreme Court's role in an impeachment except to provide that it is presided over by the chief justice.

But Giuliani then uses his astounding legal reasoning to determine that the Constitution's "silence" means that the Supreme Court gets to tell Congress how to do impeachment, in the same way that the Supreme Court can determine that some legislation is unconstitutional. Which might make some sense ... except for that part where the Constitution explicitly awards the power to determine how impeachment is handled to Congress, not the courts.

Not only is this a dizzying un-merry-go-round of illogic on the part of Giuliani, but it also ignores one other issue: This is already settled law.

As The Washington Post points out, something like Giuliani's little suggestion that Justice I-Like-Beer has veto power over the House on matters of impeachment has come up before. In 1993, the Supreme Court itself ruled, in a unanimous decision, that the Supreme Court can't step in on congressional impeachments, specifically because the Constitution divides impeachment power between the House and Senate.

Not for Giuliani. Instead, Giuliani tosses in a final claim that the best thing for Trump would be a big, big trial in the Senate, because then everyone could see what a real crime this impeachment really is and just how innocent his poor client is of all the charges. Only ... yeah, best of all would be if the Supreme Court stepped in and kept there from being any trial at all. Because the old saw about how anyone who represents themselves in court has a fool for a lawyer is trumped only by the saying that anyone who has Rudy Giuliani for a lawyer is a crook.

The one thing missing from Giuliani's column? All that evidence he was supposed to collect in Ukraine. That whole trunk full of evidence that required him to buy an extra airplane seat to get home. That evidence so exciting that he spoke to Trump from the runway. That super, super evidence that " is completely missing in action.

Related Topic(s): Constitution The; Constitutional Rights; Rudy Guiliani; Supreme Court Justices; Trump Impeachment, Add Tags
Add to My Group(s)
Go To Commenting
The views expressed herein are the sole responsibility of the author and do not necessarily reflect those of this website or its editors.