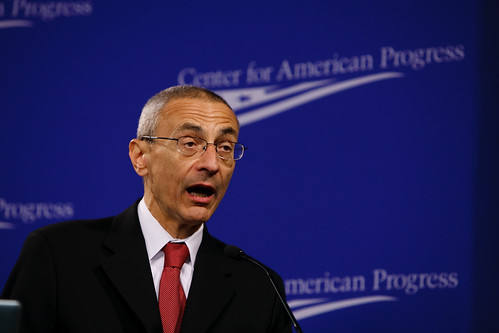 Question of the Day

Hillary Clinton campaign chairman John Podesta said the FBI did not contact him about the hack into his personal email account until after WikiLeaks began publishing his emails by the thousands on Oct. 7. (Associated Press)

This, according to top U.S. intelligence officials who say they are certain Russians hacked into the Democratic National Committee emails on orders from the highest levels and did so in hopes of undermining our elections. But they won't tell us how they know. Just trust them.

OK, if true, all of this certainly should enrage every American. Russia and anybody else committing cyberwar on the United States should be punished with massive retaliatory force.

But it is worth noting two things.

First, whoever hacked into the DNC is not responsible for all the lies, corruption, political rigging and mendacity exposed by the hacked emails. Only Hillary Clinton and her cabal of apparatchiks in the Democratic Party can be blamed for those things.

Second, it is abundantly clear that the United States has been under cyberattack by not only Russia but also China, Iran and many other enemies for years. Whatever efforts President Obama and his national-security team have taken to thwart these damaging intrusions are obviously not working. This should be a stunning black mark on Mr. Obama's presidency.

Also, some blame for the hack must be laid at the feet of the DNC and Democratic officials such as Clinton campaign chairman John Podesta for their wanton disregard for securing their own email system.

Yet, somehow, it was President-elect Donald Trump who seemed to be on trial during Thursday's Senate hearings. Desperate to get back into the national political spotlight, failed vice-presidential candidate Sen. Tim Kaine took a stab at being funny (also failed).

Related Topic(s): Obama; Wikileaks, Add Tags
Add to My Group(s)
Go To Commenting
The views expressed herein are the sole responsibility of the author and do not necessarily reflect those of this website or its editors.