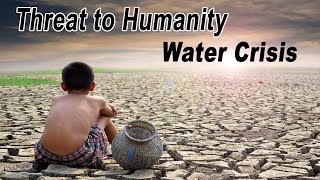 The Biggest Threat Humanity Faces is Water Crisis According To The World Economic Forum
(Image by YouTube, Channel: The Real Truth About Health)   Details   DMCA

It is written that "Enannatum, ruler of Lagash," slew "60 soldiers" from Umma. The battle between the two ancient city states took place 4,500 years ago near where the great Tigris and Euphrates rivers come together in what is today Iraq. The matter in dispute? Water.

More than four millennia have passed since the two armies clashed over one city state's attempt to steal water from another, but while the instruments of war have changed, the issue is much the same: whoever controls the rivers controls the land.

And those rivers are drying up, partly because of overuse and wastage, and partly because climate change has pounded the region with punishing multi-year droughts.

Syria and Iraq are at odds with Turkey over the Tigris-Euphrates. Egypt's relations with Sudan and Ethiopia over the Nile are tense. Jordan and the Palestinians accuse Israel of plundering river water to irrigate the Negev Desert and hogging most of the three aquifers that underlie the occupied West Bank.

According to satellites that monitor climate, the Tigris-Euphrates Basin, embracing Turkey, Syria, Iraq and western Iran, is losing water faster than any other area in the world, with the exception of Northern India.

The Middle East's water problems are hardly unique. South Asia -- in particular the Indian sub-continent -- is also water stressed, and Australia and much of Southern Africa are experiencing severe droughts. Even Europe is struggling with some rivers dropping so low as to hinder shipping.

But the Middle East has been particularly hard hit. According to the Water Stress Index, out of 37 countries in the world facing "extremely high" water distress, 15 are in the Middle East, with Qatar, Kuwait, Bahrain and Saudi Arabia heading the list.

For Syria and Iraq, the problem is Turkey and Ankara's mania for dam building. Since 1975, Turkish dams have reduced the flow of water to Syria by 40 percent and to Iraq by 80 percent. According to the Iraqi Union of Farming Associations, up to 50 percent of the country's agricultural land could be deprived of water, removing 124 million acres from production.

Conn M. Hallinan is a columnist for Foreign Policy In Focus, "A Think Tank Without Walls, and an independent journalist. He holds a PhD in Anthropology from the University of California, Berkeley. He oversaw the (more...)
Related Topic(s): Climate; Dams; Drought; Middle-east; Water; Water Pollution; Water Supply, Add Tags
Add to My Group(s)
Go To Commenting
The views expressed herein are the sole responsibility of the author and do not necessarily reflect those of this website or its editors.