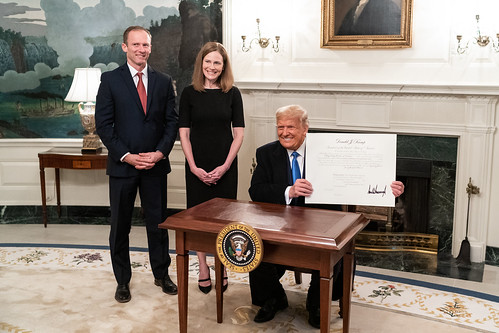 Amy Coney Barrett's confirmation as the ninth justice on the U.S. Supreme Court is a travesty of democracy.

The vote on Barrett's confirmation occurred just eight days before Election Day. By contrast, the Senate didn't even hold a hearing on Barack Obama's nominee, Merrick Garland, who Obama nominated almost a year before the end of his term. Majority leader Mitch McConnell argued at the time that any vote should wait "until we have a new president."

The Republican senators who voted for her represent 15 million fewer Americans than their Democratic colleagues.

Barrett now joins five other reactionary justices who together will be able to declare laws unconstitutional, for perhaps a generation.

Barrett's confirmation was the culmination of years in which a shrinking and increasingly conservative, rural, and white segment of the U.S. population has been imposing its will on the rest of America. They've been bankrolled by big business, seeking lower taxes and fewer regulations.

In the event Joe Biden becomes president on January 20 and both houses of Congress come under control of the Democrats, they can reverse this trend. It may be the last chance -- both for the Democrats and, more importantly, for American democracy.

For starters, increase the size of the Supreme Court. The Constitution says nothing about the number of justices. The court changed size seven times in its first 80 years, from as few as five justices under John Adams to 10 under Abraham Lincoln.

Biden says if elected he'll create a bipartisan commission to study a possible court overhaul "because it's getting out of whack." That's fine, but he'll need to move quickly. The window of opportunity could close by the 2022 midterm elections.

Second, abolish the Senate filibuster. Under current rules, 60 votes are needed to enact legislation in that chamber. This means that if Democrats win a bare majority there, Republicans could block any new legislation Biden hopes to pass.

The filibuster could be ended with a rule change requiring a mere 51 votes. There's growing support among Democrats for doing this if they gain that many seats. During the campaign, Biden acknowledged that the filibuster has become a negative force in government.

The filibuster is not in the Constitution, either.

The most ambitious structural reform would be to rebalance the Senate itself, as well as the Electoral College. For decades, rural states have been emptying as the U.S. population has shifted to vast megalopolises. The result is a growing disparity in representation.

Related Topic(s): Amy Coney Barrett; Confirmation; Imbalance; Politics; Republican; US Supreme Court, Add Tags
Add to My Group(s)
Go To Commenting
The views expressed herein are the sole responsibility of the author and do not necessarily reflect those of this website or its editors.