Republished from The Center for Economic and Policy Research

Who is to Blame for Argentina's Economic Crisis? 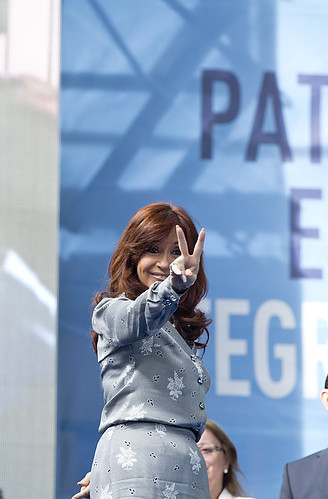 Argentines remember the role the IMF played in the last depression. They also remember the improvement in their lives under Kirchnerism.

The 12 years the Kirchners held office resulted in large increases in living standards for a vast majority of Argentines, by any reasonable comparison.Independent estimates show a decline of 71 percent in poverty and an 81 percent decline in extreme poverty. The government instituted one of the biggest conditional cash transfer programs for the poor in Latin America. According to the International Monetary Fund, gross domestic product per person grew by 42 percent, almost three times the rate of Mexico. Unemployment fell by more than half, and income inequality also fell considerably.

What are we to make of Argentina's surprise election results on August 11, which jolted pollsters and analysts alike, and roiled the country's financial markets? In the presidential primary for the country's October election, the opposition ticket of Alberto Ferna'ndez trounced President Mauricio Macri by an unexpected margin of 15.6 percent:

[The New York Times, Aug 12, 2019. BUENOS AIRES - President Mauricio Macri of Argentina was unexpectedly trounced in primary elections, suggesting that voters angered over his austerity measures and the country's deep recession and soaring inflation are inclined to put their faith in his leftist opponents....The results were seen as a vindication of Mrs. Kirchner's comeback plan, which was met with surprise and skepticism when she announced it in May.]

The Ferna'ndez coalition attributes its victory to Mr. Macri's failed economic policies, blaming him for the current economic crisis, recession and high inflation. Mr. Macri, by contrast, blames the fear of a future government of Kirchnerism his label for the opposition for the postelection financial turbulence as well as the problems of the economy since he took office more than three and a half years ago. He argues that both the markets and the people have everything to fear from such an outcome.

This disagreement is not just an academic argument, nor one specific to Argentina. It is a recurring, almost archetypical debate during economic crises that spill over into political contests. In recent years in Britain, Spain, France, Greece and other countries where failed economic policies faced left-of-center challengers Mr. Macri's refrain was a frequent line of attack by incumbents.

Financial markets can move for many reasons, which can be unclear or even based on misperceptions of reality. In the case of last week's news, we have electoral losses by a government whose economic policies have clearly failed and gains by challengers who hail from a period of strong and widely shared economic growth. This is not something that is inherently bad for the economy.

With Kirchnerism, Mr. Macri refers to the policies, followers and presidential administrations of the Kirchner family, which held office from 2003 to 2015 first Ne'stor Kirchner, and then Cristina Ferna'ndez de Kirchner. Ms. Kirchner is running as the vice-presidential candidate on Alberto Ferna'ndez's ticket and is a prominent leader of the opposition coalition although this coalition is much larger and broader than the "Kirchnerista" base.

From an economist or social scientist's perspective, it's not clear why Kirchnerism should inspire fear. Looking at the most important economic and social indicators, the governments of the Kirchner presidencies were among the most successful in the Western Hemisphere.

Independent estimates show a decline of 71 percent in poverty and an 81 percent decline in extreme poverty. The government instituted one of the biggest conditional cash transfer programs for the poor in Latin America. According to the International Monetary Fund, gross domestic product per person grew by 42 percent, almost three times the rate of Mexico. Unemployment fell by more than half, and income inequality also fell considerably. The 12 years the Kirchners held office resulted in large increases in living standards for a vast majority of Argentines, by any reasonable comparison.

Economic growth waned in the last few years of Ms. Kirchner's presidency. The government made some mistakes and was also dealt an external economic blow. A 2012 ruling by a federal appeals court in New York a decision widely regarded as dubious and political took more than 90 percent of Argentina's creditors hostage to force payment to a small group of "vulture funds" that refused to join the debt restructuring of the early 2000s. The United States government blocked loans from international lenders such as the Inter-American Development Bank, at a time when the economy needed the foreign exchange.

By comparison, poverty has increased significantly, income per person has fallen, and unemployment has increased during Mr. Macri's term, which began in December 2015. Short-term interest rates have shot up to 75 percent today from 32 percent; inflation has soared to 54 percent from 18 percent. The public debt has grown to more than 86 percent of GDP from 53 percent.

How much of this economic crisis and poor performance is his predecessor's fault?

In 2018 Mr. Macri signed an agreement for a $57 billion loan the largest IMF bailout in history. The loan agreement, along with the reviews since, detail the government's economic goals, strategy and execution. There is a lot of information publicly available that lays out what went wrong.

The main strategy of the program was to restore investor confidence through tighter fiscal and monetary policy. But, as has often happened, these measures slowed the economy and undermined investor confidence. By October, the results were vastly worse than the IMF had projected. The government and IMF increased both fiscal and monetary tightening, but it did not help.

Related Topic(s): Economics, Add Tags
Add to My Group(s)
Go To Commenting
The views expressed herein are the sole responsibility of the author and do not necessarily reflect those of this website or its editors.