About a year ago, Mr. Sam Chang (AKA, Tien Shang Chang) made an eloquent presentation that is well worth watching. In his presentation he promotes a system that he calls "Negative Voting," by which he meant the system that I have referred to as "Balanced Plurality Voting." Interestingly, his examples tend to focus on two-candidate (and even one-candidate) elections whereas in this series of articles I have placed much more emphasis on multiple-candidate elections with more than two candidates. In addition, he has been able to gather some supporting evidence in favor of this voting method through the use of polls.

Chang shows that good arguments for balanced voting can be made even for single-candidate elections whereas my own thinking has been focused primarily on bringing more competing candidates into elections. But even with just a single candidate, he argues that (what I call balanced plurality voting) would improve democracy by encouraging more voter participation and by allowing voters more freedom to express themselves. 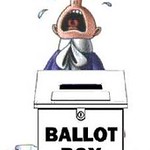 An interesting point that Chang makes in his presentation that does conflict with my own thinking is that he would call for a new election when the winner had too small a net vote total. In contrast, I simply assumed that the winner of a balanced election might well have even a negative net vote. However, we agree entirely on thinking this distasteful situation would happen rarely. That being said, I would note that plurality voting does nothing to discourage (or even to recognize) such a pathological outcome and this is illustrated quite well by recent U.S. presidential election.

But on the other hand, repeating an election could present practical, legal and even constitutional issues that could well be very difficult to overcome. And while a winner having a negative net vote would be possible, it would become increasingly improbable over time as the candidates come to realize that disapproval by a large number of voters has become a severe disadvantage. Under balanced voting systems, candidates would likely make more of an effort to appeal to the broad consensus of voters and to avoid appealing to only an extreme segment of voters. Candidates for office with high disapproval levels would presumably become a thing of the past as they and those who would support them come to realize the chances of election are slim.

I have often made the point that the number of candidates should be an important consideration in deciding on a voting scheme. Of course, no matter how many candidates there are, balanced plurality voting would be a significant improvement over the traditional plurality system. But with many candidates, other systems should be considered despite the greater complexity of these other systems. We saw in the recent Republican primary elections (and in the 2008 Democratic primaries) that even under the yoke of plurality voting, we can have important elections with many candidates. The notion of "one man, one vote" has to be questioned when, with many candidates to choose from, voter opinion necessarily becomes more complex. With increasingly complex opinions, voters need more freedom to express those opinions adequately, and greater expression seems to demand a more complex voting system. But if voters are not permitted to express their opinions adequately, then there really is no reason to expect elections to have a democratic outcome.

In this series, the four polls have been the most widely read, but among the actual articles, one of the most popular has been the one with the catchy title, What Might be the Best Voting System. In that article I ventured the opinion that the answer might be Balanced Approval Voting, but with the caution that better systems might be found with the passing of time. More time has passed so I have had time to reconsider that position.

In a more recent article a variety of voting systems were compared and today, based mostly on that comparison, I would have to conclude that I would now have a preference for Balanced Ration Voting as the best system overall; it seems to work better than balanced approval voting even when there are fairly few candidates. The number of candidates is still an important consideration, however, and in an election with only one or even as many as three or four candidates, balanced plurality voting may be the best choice.

Of course, the future may (in fact probably will) reveal new and in important ways, better systems for voting.

Related Topic(s): Election; Voting; Voting Reform; Voting Systems, Add Tags
Add to My Group(s)
Go To Commenting
The views expressed herein are the sole responsibility of the author and do not necessarily reflect those of this website or its editors.