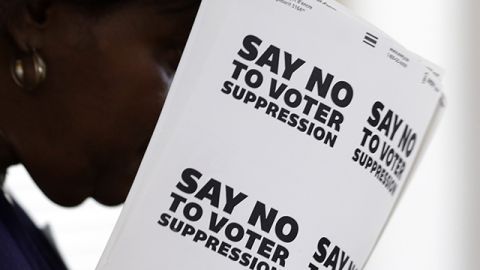 But something just happened in Wisconsin.

On Monday, Gov. Tony Evers issued an executive order postponing the state's primary to June 9, as his counterparts in other states have done.

As a result, voters across Wisconsin woke up Tuesday with a choice Gov. Evers had effectively taken off the table: "Choosing between exercising their right to vote and staying healthy and safe."

The night of Evers' order, the state ruled elections must be held on schedule despite the coronavirus/COVID-19 public health emergency.

Moreover, Wisconsin GOP lawmakers refused to advance vote-by-mail provisions that would prevent those crowds at the polls.

Due to fears of coronavirus exposure, thousands of poll workers decided to stay home, leading to dozens of polling places being shut down.

Naturally, there has been a surge of requests for absentee ballots leading to a federal district court to order an absentee ballot deadline extension.

So long as ballots are returned by April 13, the court stated, they will be counted.

By a 5-4 vote Monday, the nation's highest court handed Wisconsin--and the entire country--what Mark Joseph Stern of Slate called "One of the most brazen acts of voter suppression in modern history."

Related Topic(s): Election; Elections; Republican; Republican GOP Dirty Tricks; Republican Hypocrisy; Republican Voter Suppression; Republicans-GOP; Voting, Add Tags
Add to My Group(s)
Go To Commenting
The views expressed herein are the sole responsibility of the author and do not necessarily reflect those of this website or its editors.