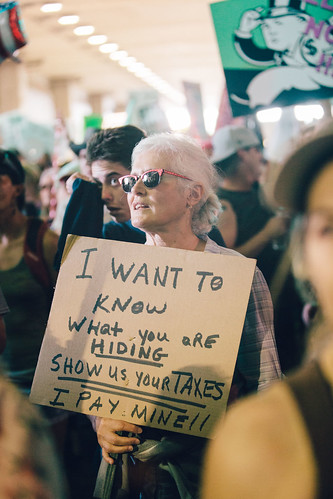 After all the murders he either committed or was at least behind, after all the bootleg liquor he smuggled, the money he extorted, the prostitution rings he had a hand in, it was tax evasion that ultimately sent the notorious mobster Al Capone to prison.

Could the same fate befall Donald Trump, or least those covering for him?

"The committee's request raises serious issues concerning the constitutional investigative authority, the legitimacy of the asserted legislative purpose and the constitutional rights of American citizens. The legal implications of this request could affect protections for all Americans against politically motivated disclosures of tax information, regardless of which party is in power."

There is no "serious issue concerning constitutional investigative authority."

Congress is acting on authority granted in the IRS Code section 6103(f):

This does not exclude anyone.

Not even the President of the United States.

Trump told a reporter "No, there is no law" when asked if federal law requires him to hand over his tax returns.

"Despite what the president said, there is a law."

The last president from whom Congress requested tax returns was Richard Nixon, who complied, revealing he owed $477,000 in additional taxes.

"So there is good historical reason to be concerned," Thorndike concluded.

Related Topic(s): Congress; Federal Agencies Enforcement; Federal Agency IRS; Legislation; Money; Taxation; Trump Con, Add Tags
Add to My Group(s)
Go To Commenting
The views expressed herein are the sole responsibility of the author and do not necessarily reflect those of this website or its editors.