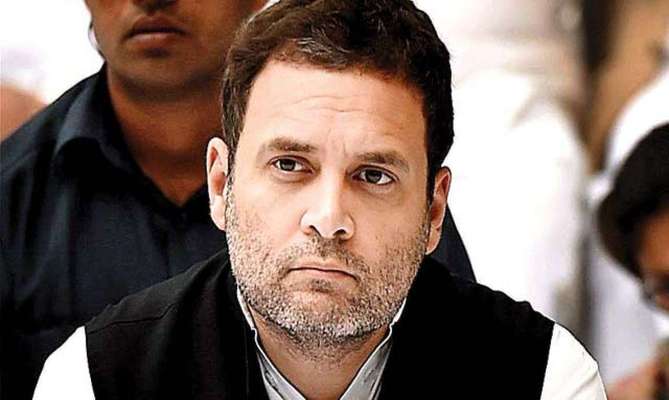 Has Gandhi missed the boat?
(Image by newsbred.com)   Details   DMCA

Former Prime Minister H.D. Deve Gowda feels Priyanka Gandhi-Vadra would do better than Rahul Gandhi and that's a serious indictment of Congress party chief who harbours the ambition of becoming Prime Minister after the 2019 General Elections.

"I think Priyanka Gandhi would do better than Rahul Gandhi," said Gowda in an interview to The Hindu which almost implies that he views the scion of Gandhi dynasty as no challenge to BJP or Prime Minister Narendra Modi. Gowda was unable to conceal his disappointment at the Congress for failing to build on alliance with regional forces after all of them came on stage at the swearing in ceremony of his son H.D. Kumaraswamy as chief minister of Karnataka eight months ago.

"The Congress could've taken forward the unity of the Opposition by organizing rallies with regional parties"It's been eight months since the national leaders congregated for a show of strength in Bengaluru," said a dejected Gowda.

Since the heady, though unholy, mix of Congress-JD(S) in Karnataka eight months ago, all Congress has done is to annoy the heavyweight regional satraps of the country. Kumaraswamy threatens to quit every single day; Mayawati loses no opportunity to take a swipe at Rahul Gandhi; Akhilesh Yadav has gone ahead and hugged BSP ignoring Congress completely in the vital state of Uttar Pradesh; Mamata Banerjee is angry that Rahul Gandhi didn't respond to her calls in Tripura elections; and Arvind Kejriwal wouldn't have anything to do with Congress in Delhi or Punjab.

"Mayawati sought 10 seats in the recent polls to the Madhya Pradesh assembly. The Congress could've conceded the demand. But it didn't," said a visibly dejected Gowda.

Such is the hubris of Congress that they stayed aloof and watched Shiv Sena and Lok Janshakti Party (LJP) of Ram Vilas Paswan walk over to the BJP corner papering over a potential split.

Surely Rahul Gandhi is aware that a poorer showing than 44 seats in 2014 elections could imply a political oblivion for him. Not only his party but he too faces an uncertain future. Why then is he not tightening his belt and attempting to be in the driver's seat?

Surely arrogance rather than common sense is getting the better of Rahul Gandhi. These are not the times when regional chiefs would make a beeline to him. Remember, Mamata Banerjee didn't invite Congress in her mahagathbandhan rally recently. A party fighting for its very survival can't be so smug. Maybe the wins in Rajasthan, Madhya Pradesh and Chattisgarh have caused hubris. The irony is Congress party's slogan in 2014 elections was: Main nahin, hum (It's not about me but us).

Let's not forget the insecurity too which kind of freezes Mr. Gandhi. He doesn't seem to have done much for the next-generation leaders of Congress. When was the last you heard Sachin Pilot or Jyotiraditya Scindia make a statement on national issues? Mud-slinging on Modi with trumped up issues of Rafale etc has been both a waste of energy and time.

All this indicates that the door on Rahul Gandhi as Prime Minister, in case the opposition is able to muster enough seats, is as good as shut. Congress would've to do remarkably better and command at least 100 seats in the 2019 elections for regional heavyweights to make space for it. Probably Rahul Gandhi is banking on a similar dream. Possibly his Minimum Income Guarantee (MIG) bluster could yield gains though the bad accounting would show up. With shut eyes, you see, one could only go so far.

Related Topic(s): Arrogance; Assembly; Congress; Hubris; Opposition; Polls; Rahul Gandhi; Regional, Add Tags
Add to My Group(s)
Go To Commenting
The views expressed herein are the sole responsibility of the author and do not necessarily reflect those of this website or its editors.