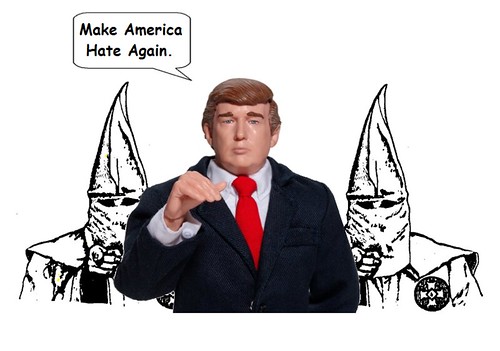 Donald Trump says he watched the destruction of the World Trade Center, and saw "thousands and thousands of people [who were] cheering as that building was coming down." Every non-partisan fact-checking site and news medium debunks Trump's faulty recollection. But 9/11 burnished an image in his mind of terrorism by Muslims. His solution is to issue an unconstitutional moratorium against Muslims who wish to emigrate to the U.S.

He plays to the fears of Americans by declaring President Obama has plans to bring 250,000 Syrian refugees into the country, and says, "We don't know anything about them." But, we do know about "them" because the vetting process for admitting persons to the U.S. is about two years; the U.S. in fiscal year 2016 plans to admit only 10,000 Syrian refugees.

The extreme right wing denounce President Obama for attending an elementary school in Indonesia where, they claim, he was indoctrinated in anti-American propaganda and became a Muslim. For the past 12 years, the right wing has referred to the president as Barack HUSSEIN Obama, emphasizing his middle name. What they don't emphasize is that the Founding Fathers were adamant that there is a separation of church and state, and that no one religion is included or excluded from persons running for any office. Nevertheless, the President was baptized in the United Church of Christ and is a Protestant.

On the last day of the Democratic National Convention in July, Khizr Khan, the father of Army Capt. Humayun Khan, who was killed in combat in Iraq, asked Trump if he "even read the United States Constitution. I will gladly lend you my copy. In this document, look for the words 'liberty' and 'equal protection of law.'" After pulling a pocket-sized Constitution from his suit jacket, he then asked, "Have you ever been to Arlington Cemetery? Go look at the graves of brave patriots who died defending the United States of America. You will see all faiths, genders, and ethnicities. You have sacrificed nothing--and no one."

Some of Trump's advisors claimed the Khans, who are Muslims who emigrated from Pakistan, could have been terrorists--Trump himself didn't rebuke them for their comments--and then insensitively said he also sacrificed because he "created thousands and thousands of jobs, tens of thousands of jobs, built great structures. I've had tremendous success. I think I've done a lot." He also challenged Ghazala Khan, Capt. Khan's mother who, he said, had stood mute besides her husband and had "nothing to say. She probably--maybe she wasn't allowed to have anything to say." Ghazala Khan responded in a commentary in the Washington Post that she told her husband she could not overcome her grief to speak because "hearts of pain can never heal as long as we live. Just talking about it is hard for me all the time. Every day, whenever I pray, I have to pray for him, and I cry. The place that emptied will always be empty."

There is also a strain of anti-Semitism in the base of Trump's hard core supporters. With Hillary Clinton increasing her lead over Trump, according to several polls, Trump replaced campaign chair Paul Manafort with Steve Bannon, who had been CEO of Breitbart News, an extreme right-wing online news site that promotes white nationalism and opposes immigration of individuals who would be part of minority cultures in the United States. Bannon's ex-wife, Mary Louise Piccard, accused him of anti-Semitism during a child custody fight in 2007. In a sworn statement to the court, she said Bannon opposed sending their twin daughters to the Archer School for Girls in Los Angeles. "The biggest problem he had with Archer is the number of Jews that attend," Piccard said. She also testified that Bannon said "he doesn't like the way they [Jewish parents] raise their kids to be 'whiny brats' and that he didn't want the girls going to school with Jews." A spokesman for Bannon denied the truth in Piccard's statements.

An individual created a print ad of a picture of Hillary Clinton, with a red Star of David over a stack of $100 bills; inside the Star in white lettering was "Most Corrupt Candidate Ever!" That anonymous person, who regularly posts anti-Semitic material, then posted the graphic on Twitter. Trump never disavowed the anti-Semitism of that graphic, and re-tweeted it to his 11 million followers. He later said it wasn't a Star of David but a depiction of a sheriff's badge, but sent out another tweet, this time with the words in a circle instead of the Star of David.

Several Jewish journalists who have covered the campaign and have written stories about Trump and his campaign report they have received anti-Semitic email from Trump supporters; Trump himself, while insensitive to Jews, may not be anti-Semitic.

A few of Trump's advisors are Jews, and his daughter, Ivanka, converted to Judaism in 2009. However, most Jews are liberals who are willing to stand up for the rights of all minorities and are strong advocates of social justice. They see in Trump personality traits that that remind them of more than four millennia of anti-Semitism from numerous rulers, demagogues, and masses who believed their own problems were caused by Jews and other minority religions and cultures.

Hillary Clinton said Trump "is taking hate groups mainstream and helping a radical fringe take over the Republican Party." She accuses him of being "xenophobic, racist, misogynistic," and asked, "If he doesn't respect all Americans, how can he serve all Americans?" Trump's response was to criticize Clinton and the Democratic party for using race-baiting and fear mongering tactics. At a campaign rally this past week in Jackson, Miss., he blurted out, "Hillary Clinton is a bigot who sees people of color only as votes, not as human-beings worthy of a better future. She's going to do nothing for African Americans. She's going to do nothing for the Hispanics. She's only going to take care of herself, her husband, her consultants, her donors--these are the people she cares about. She doesn't care what her policies have done to your communities. She doesn't care."

Most of the 13.4 million Americans who voted for Trump in the primaries are White middle-class individuals who believe they are alienated from the political and business worlds, and are willing to follow a billionaire businessman running for the presidency who can channel their bar-room hate. Of the 2,472 delegates to this year's Republican National Convention, only 18 were Blacks. Trump never protested or even discussed how the Republicans should be doing more to get diversity within the party. Trump's campaign rallies are dominated by Whites. No matter what he says or does, that isn't likely to change.

When many of the extreme right-wing look into mirrors, they see Donald Trump.

[Dr. Brasch, an award-winning journalist, has covered government and politics at all levels for four decades. His latest book is Fracking America: Sacrificing Health and the Environment for Short-Term Economic Gain.]