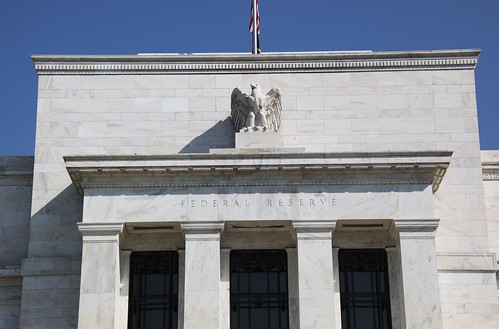 "Quantitative easing" was supposed to be an emergency measure. The Federal Reserve "eased" shrinkage in the money supply due to the 2008-09 credit crisis by pumping out trillions of dollars in new bank reserves. After the crisis, the presumption was that the Fed would "normalize" conditions by sopping up the excess reserves through "quantitative tightening" (QT) raising interest rates and selling the securities it had bought with new reserves back into the market.

The Fed relentlessly pushed on with quantitative tightening through 2018, despite a severe market correction in the fall. In December, Fed Chairman Jerome Powell said that QT would be on "autopilot," meaning the Fed would continue to raise interest rates and to sell $50 billion monthly in securities until it hit its target. But the market protested loudly to this move, with the Nasdaq Composite Index dropping 22% from its late-summer high.

Worse, defaults on consumer loans were rising. December 2018 was the first time in two years that all loan types and all major metropolitan statistical areas showed a higher default rate month-over-month. Consumer debt including auto, student and credit card debt is typically bundled and sold as asset-backed securities similar to the risky mortgage-backed securities that brought down the market in 2008 after the Fed had progressively raised interest rates.

Chairman Powell evidently got the memo. In January, he abruptly changed course and announced that QT would be halted if needed. On February 4th, Mary Daly, president of the Federal Reserve Bank of San Francisco, said they were considering going much further. "You could imagine executing policy with your interest rate as your primary tool and the balance sheet as a secondary tool, one that you would use more readily," she said. QE and QT would no longer be emergency measures but would be routine tools for managing the money supply. In a February 13th article on Seeking Alpha titled "Quantitative Easing on Demand," Mark Grant wrote:

If the Fed does decide to pursue this strategy it will be a wholesale change in the way the financial system in the United States operates and I think that very few institutions or people appreciate what is taking place or what it will mean to the markets, all of the markets.

The Problem of Debt Deflation

The Fed is realizing that it cannot bring its balance sheet back to "normal." It must keep pumping new money into the banking system to avoid a recession. This naturally alarms Fed watchers worried about hyperinflation. But QE need not create unwanted inflation if directed properly. The money spigots just need to be aimed at the debtors rather than the creditor banks. In fact regular injections of new money directly into the economy may be just what the economy needs to escape the boom and bust cycle that has characterized it for two centuries. Mark Grant concluded his article by quoting Abraham Lincoln:

The Government should create, issue, and circulate all the currency and credits needed to satisfy the spending power of the Government and the buying power of consumers. By the adoption of these principles, the taxpayers will be saved immense sums of interest. Money will cease to be master and become the servant of humanity.

The quote is apparently apocryphal, but the principle still holds: new money needs to be regularly added to the money supply to avoid an overwhelming debt burden and allow the economy to reach its true productive potential. Regular injections of new money are necessary to avoid something economists fear even more than inflation the sort of "debt deflation" that took down the economy in the 1930s.

Most money today is created by banks when they make loans. When overextended borrowers pay down old loans without taking out new ones, the money supply "deflates" or shrinks. Demand shrinks with it, and businesses lacking customers close their doors, in the sort of self-feeding death spiral seen in the Great Depression.

As Australian economist Steve Keen observes, today the level of private debt is way too high, and that is why so little lending is occurring. But mainstream economists consider the rate of growth of debt to be irrelevant to macroeconomic policy, because lending is thought to simply redistribute spending power from savers to investors. Conventional economic theory says that banks are merely intermediaries, recirculating existing money rather than creating spending power in their own right. But this is not true, says Prof. Keen. Banks actually create new money when they make loans. He cites the Bank of England, which said in its 2014 quarterly report:

[B]anks do not act simply as intermediaries, lending out deposits that savers place with them, and nor do they 'multiply up' central bank money to create new loans and deposits. . . .

In the modern economy, most money takes the form of bank deposits. But how those bank deposits are created is often misunderstood: the principal way is through commercial banks making loans. Whenever a bank makes a loan, it simultaneously creates a matching deposit in the borrower's bank account, thereby creating new money.

Loans create deposits, and deposits make up the bulk of the money supply. Money today is created by banks as a debt on their balance sheets, and more is always owed back than was created, since the interest claimed by the banks is not created in the original loan. Debt thus grows faster than the money supply. When overextended borrowers quit taking out the new loans needed to repay old loans, the gap widens even further. The result is debt deflation a debt-induced reduction in the new money needed to stimulate economic activity and growth. Thus the need for injections of new money to fill the gap between debt and the money available to repay it.

However, the money created through QE to date has not gone to the consuming public, where it must go to fill this gap. Rather, it has gone to the banks, which have funneled it into the speculative financialized markets. Nomi Prins calls this "dark money" the trillions of dollars flowing yearly in and around global stock, bond and derivatives markets generated by central banks when they electronically fabricate money by buying bonds and stocks. She writes, "These dark money flows stretch around the world according to a pattern of power, influence and, of course, wealth for select groups." She shows graphically that the rise in dark money is directly correlated with the rise in financial markets.

QE has worked to reverse the debts of the banks and to prop up the stock market, but it has not relieved the debts of consumers, businesses or governments; and it is these debts that will trigger the sort of debt deflation that can take the economy down. Keen concludes that "no amount of exhorting banks to 'Intermediate' will end the drought in credit growth that is the real cause of The Great Malaise." The only way to reduce the private debt burden without causing a depression, he says, is a Modern Debt Jubilee or People's Quantitative Easing.

In antiquity, as Prof. Michael Hudson observes, debts were routinely forgiven when a new ruler took the throne. The rulers and their advisors knew that debt at interest grew faster than the money supply and that debt relief was necessary to avoid economic collapse from an overwhelming debt overhang. Economic growth is arithmetic and can't keep up with the exponential growth of debt growing at compound interest.

Related Topic(s): Federal Reserve System; Quantitative Easing; Treasury Federal Reserve Monetary Policy, Add Tags
Add to My Group(s)
Go To Commenting
The views expressed herein are the sole responsibility of the author and do not necessarily reflect those of this website or its editors.