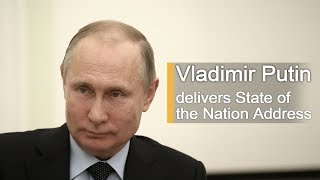 Putin has given a remarkable address to the Federal Assembly, the Russian People, and the peoples of the world.

In his speech Putin revealed the existence of new Russian nuclear weapons that make it indisputably clear that Russia has vast nuclear superiority over the United States and its pathetic NATO vassal states. In view of the Russian capabilities, it is not clear that the US any longer qualifies as a superpower.

There is little doubt in my mind that if the crazed neoconservatives and military/security complex in Washington had these weapons and Russia did not, Washington would launch an attack on Russia.

Putin, however, declared that Russia has no territorial ambitions, no hegemonic ambitions, and no intention to attack any other country. Putin described the weapons as the necessary response to the West's firm refusal year after year to accept peace and cooperation with Russia, instead surrounding Russia with military bases and ABM systems.

Putin said: "We are interested in normal constructive interaction with the United States and the European Union and are expecting that common sense will prevail and our partners will choose fair and equal cooperation... Our policy will never be based on aspirations for exceptionalism, we are defending our interests and respect the interests of other countries."

Putin told Washington that its efforts to isolate Russia with sanctions and propaganda and to prevent Russian capability to respond to the growing military encirclement from the West has failed. Russia's new weapons have made the entire US/NATO approach "ineffective from a military point of view."

"The sanctions to constrain Russia's development, including in the military sphere... they did not work out... They have not been been able to contain Russia. They need to realize this... Stop rocking the boat in which we all sit."

So, what is to be done? Will the West come to its senses? Or will the West, drowning in debt and loaded to the gills with bloated and ineffective military industries, intensify the Cold War that Washington has resurrected?

I do not think the West has any senses to come to. Washington is totally absorbed in "American exceptionalism." The extreme hubris of the "indispensable country" afflicts all. The Europeans are bought and paid for by Washington. I am confident that Putin was hopeful that European leaders would understand the futility of trying to intimidate Russia and cease to endorse Washington's Russiaphobia that is leading to nuclear war. No doubt Putin was disappointed in the idiotic response of the UK defense minister Gavin Williamson who accused Russia of "choosing a path of escalation and provocation."

My guess is that the neoconservatives will play down Russia's capability, because the neoconservatives do not want to accept that there are any constraints on Washington's unilateralism. On the other hand, the military/security complex will hype the Russian superiority in order to demand a larger budget to protect us from "the Russian threat."

The Russian government concluded from years of frustrating experience with Washington's refusal to consider Russia's interests and to work together in a cooperative manner that the reason was Washington's belief that American power could compel Russia to accept American leadership. To shatter this Washington illusion is the reason for Putin's forceful announcement of the new Russian capabilities.

In his address, he says, "no one wanted to speak with us. No one wanted to listen to us. Listen to us now." Putin stressed that Russia's nuclear weapons are reserved for retaliation, not for offense, but that any attack on Russia or Russia's allies will receive an immediate response "with all that it implies."

Having made it clear that the Western policy of hegemony and intimidation is dead in the water, Putin again held out the olive branch: let us work together to solve the world's problems.

I hope that Russian diplomacy succeeds in bringing an end to the rising tensions fomented by Washington. However, Russian diplomacy faces two perhaps insurmountable obstacles. One is the need for the bloated US military/security complex to have a major enemy as a justification for its $1,000 billion annual budget and the power that goes with it. The other obstacle is the neoconservative ideology of US world hegemony.

Related Topic(s): NATO; Neoconservatives; Putin; State Of The Union Speech, Add Tags
Add to My Group(s)
Go To Commenting
The views expressed herein are the sole responsibility of the author and do not necessarily reflect those of this website or its editors.