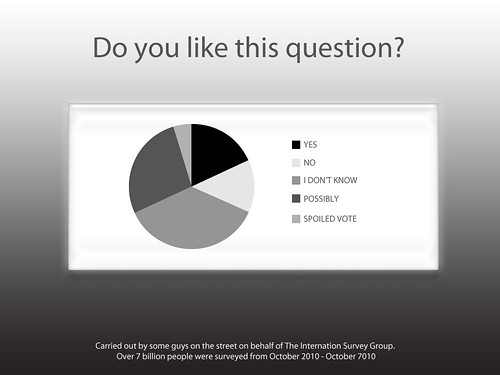 My wife, Rosemary, a registered Republican, received a black and white poll in the mail. Plastered across the top of the sheet in bold black letters was the title: "MAKE AMERICA GREAT AGAIN." I wonder who that could be.

First question: "Hillary Clinton is working hard to win the White House so she can carry forward Barack Obama's disastrous policies--including increased taxes--which have been so harmful to our nation's economy. Donald Trump is dedicated to lowering taxes and instituting responsible reforms that will create jobs, strengthen free enterprise and boost economic growth. Which candidate do you trust more to put America on a secure and prosperous economic path."

Gee, this is a hard one. Let's think about it awhile. OK, time's up. I guess, based upon the question, the demon Clinton wasn't the right answer. Rosemary needed to check Trump as the one to keep the country moving forward.

There were nine questions, all similar to the first one. The other questions had to do with the federal debt, foreign policy, the nomination of federal judges, immigration, environment, and ObamaCare. The ninth one asked the most vital question: "Are you willing to financially help the Trump Make America Great Again Committee in making sure our nation finally leaves behind the ruinous policies of the past eight years and elects a Republican president who will Make America Great Again?"

Below that question was a form to fill out to donate. All my wife had to do was to check one of the boxes of suggested donations, starting with $35 and increasing to $5,000; fill in the boxes with her occupation, employer, phone number, email address, and credit card information, and mail it back in a postage-paid envelope. She could also call a campaign number and give them her personal information and make that donation. She chose an alternate procedure. She didn't fill out the poll, which was a not-so-subtle way to withdraw money from her wallet, and sent them a bookmark for my latest book. (I do that for all junk mail that includes a self-addressed stamped envelope, especially one that wants money. I doubt anyone is really tabulating the results--or even cares about the answers.)

What came in the mail was a "push poll." The questions were designed to "push" the recipient to vote for the preferred answers, to make the politician's supporters believe they matter, and to energize the base of the support. Most push polls are designed to attack an opponent in a political race. A legitimate poll is drawn from a random sample of voters, has no identification of whom the recipient is, has neutral questions, and doesn't want money. The results are tabulated, analyzed, and published. But why analyze and publish the results when more than 90 percent of the recipients of the poll are going to be pushed in the direction that the not-so-independent campaign committee wants. The only real analysis of those who send out push polls is who gave what amount and is there a correlation to determine how many more attempts--by email, by phone--the campaign committee should devote to getting even more money. Rosemary usually just trashes the myriad requests for money to help Republican candidates.

Unfortunately, the Trump committee isn't alone in using this tactic. The first push poll was in 1946 when Richard Nixon ran for Congress and used the technique by direct mail and phone "interviews" to drop fear that the sitting congressman, Jerry Voohis, who represented a southern California district, was a communist. Nixon began his political career; Voorhis, who wasn't a communist, lost his. George W. Bush used push polls extensively in his first race for the governorship of Texas and again in his campaign for the presidency.

The Democrats use it continuously, also sliding in huge globules of fear in each question, to solicit funds. The Democrats usually have space to enter comments. Usually, I don't answer the poll. With Democrats, I will often write a note about the unfairness of the poll, ask them to contact me when they want my real opinions, and put a bookmark into the return envelope. So far, no one from the Hillary Clinton campaign or the Democratic National Committee has called to solicit my professional opinion or assistance--and to my knowledge, no one has bought any books.
[Dr. Brasch is an award-winning journalist who has covered politics/government and social issues for more than four decades. His latest book is Fracking America: Sacrificing Health and the Environment for Short-Term Economic Benefit.]

Related Topic(s): Clinton Campaign; Donald Trump; Donald Trump; Money Trumps Love; Poll; Republican; Survey, Add Tags
Add to My Group(s)
Go To Commenting
The views expressed herein are the sole responsibility of the author and do not necessarily reflect those of this website or its editors.