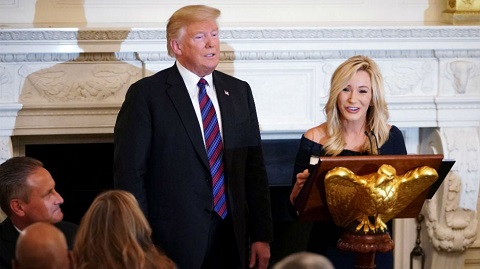 Lock down, social distancing, and quarantine-defying mega-churches are clearly a threat to public health and well-being
(Image by TheHill)   Details   DMCA

The City of Destiny in Apopka, Florida [right] is a de facto entertainment complex for the weak-minded and gullible. It is neither a theme park nor a cinema multiplex. The City of Destiny is one of several megachurches across the United States that always takes advantage of people during a major threat like the COVID-19 pandemic to fleece their congregations and lure into their grips the fearful.

Megachurches advance the "prosperity gospel," a false Christian teaching that contends that wealth can be obtained through worship of and, particularly, tithing to Jesus Christ. The prosperity gospel belief is an offshoot of the theology of Christian Dominionism and The Fellowship, the latter a shadowy right-wing cult that sponsors the annual National Prayer Breakfast in Washington, DC.

What makes the City of Destiny more dangerous than most is that it is headed up as "oversight pastor" by a female version of Elmer Gantry named Paula White, who has Donald Trump's ear as his special adviser to the Center for Faith and Opportunity Initiatives in the White House. It has been reported that Trump, against the recommendations of his senior public health advisers, wants to end the pandemic lock down in the United States on April 12, Easter Sunday. Some pundits speculate that Trump is bowing to pressure from Wall Street, particularly his economic adviser Larry Kudlow, who, as a Catholic convert, may or may not celebrate Easter, and former Goldman Sachs CEO Lloyd Blankfein, who most definitely does not celebrate Easter.

In fact, Trump, who wants to throw caution to the wind and have the United States "opened up and just raring to go by Easter," is heeding the advice of White. On her church's cable TV program White insists that her church is a "hospital to the sick" and that if people reach deep and contribute money, they will be immune to the coronavirus. Just as Trump, a well-known carnival barker, is using the coronavirus to make political points to his faithful, White is using the pandemic to line her own pockets. After all, she has a million dollar waterfront mansion and a private jet to maintain.

On a recent broadcast, White said, "Every single day we are a hospital to the sick, not necessarily the physically sick. But we are a hospital for those who are soul sick, those who are spiritually sick." White urged her viewers to send her "maybe $9 or whatever God tells you to do," suggesting that God would really like contributions of $91. The amount is a tied to Psalm 91, which asserts that God will deliver the faithful from "the noisome pestilence."

During the pandemic, there is plenty of "noisome pestilence" to be found on the religious cable channels. Clearly, Trump understands his TV audience, those who flip between Fox News and religious hucksters like White and Jerry Falwell, Jr. The latter, against the wishes of Virginia Governor Ralph Northam, announced that he was calling back to class students and faculty to Liberty University in Lynchburg, Virginia. Schools, colleges, and universities across the United States remain closed throughout the remainder of the current semester and well into the summer break.

Another loyal Trump fan, the disgraced televangelist and ex-con Jim Bakker of the defunct "PTL Club," told cable viewers of his "Jim Bakker Show" an advertised liquid silver solution was a miracle cure for the coronavirus. One of Bakker's TV shills, a homeopathic "expert," claimed that a 4-ounce bottle of colloidal silver, retailing at $80, would cure one of the coronavirus, stressing that it "totally eliminate it. Kills it. Deactivates it." The attorneys general of New York and Missouri threatened legal action against Bakker unless he pulled his specious claims. Bakker, agreeing to cease advertising the "snake oil," blamed it on a "war" against him being waged by "demonic" forces.

White, Bakker, and other TV gurus, swamis, and fakirs have seen the welcome mat rolled out for them by the Trump White House. Trump considers these grifters to be his emissaries to his political base and he has provided every effort to placate them, including having them "lay their hands" on Trump in the Oval Office.

An Internet TV preacher who is in tight with Trump is Florida-based Rick Wiles of TruNews. Wiles, the pastor of Flowing Streams Church in Vero Beach, Florida, is a well-known anti-Semitic propaganda merchant. Wiles has managed to obtain White House press credentials for five of his "reporters," all of whom were invited to cover Trump's attendance at January's World Economic Forum in Davos, Switzerland. Trump memorably played down the effects of the coronavirus on the United States during the forum.

Wiles, whose media operation remains accredited to the White House, maintains that the coronavirus is a plague sent by God in order to kill all the LGBTQ people and other "sinners." Wiles recently stated that the death from coronavirus of Richard E. Weber, a member of the board of the LGBT Bar Association of Greater New York, was part of God's "purge" of LGBTQ people from the planet.

Another mega-church ally of Trump, Baptist minister Robert Jeffress, after having defied a crowd-limitation order by Dallas authorities by packing his First Baptist Church for his March 15 service, opted, like White in Florida, to later hold online services. However, these religious hucksters are losing patience with the lock downs and have convinced Trump to re-open the country on Easter Sunday. In a Fox News town hall, Trump channeled the megachurch hucksters' frustration, saying, "I say wouldn't it be great to have all of the churches fullyou know the churches aren't allowed to have much of a congregation there. And most of them, I watched on Sunday onlineand it was terrific, by the waybut online is never going to be like being there. So I think Easter Sunday and you'll have packed churches all over our countryI think it will be a beautiful time. And it's just about the timeline that I think is right."

Some of Trump's preacher allies have not complied at all with shutdown orders on large crowds. Mega-church preacher Rodney Howard-Browne of The River Church of Tampa Bay, a frequent Trump White House guest, not only held in-person services but encouraged his audience to shake hands with one another and dispense with social distancing. Howard-Browne insists the coronavirus was manufactured by the Chinese government and the "communist"-run media to enable a shadowy "money cartel" (read that as "the Jews") to benefit from the collapsed economy. Howard-Browne, like many in the prosperity gospel evangelical community, is a believer of the prosperity gospel, or the "how to get rich quick scheme" in taking advantage of federal and state tax exemptions for religious institutions.

Howard-Browne and Pastor Tony Spell of the Life Tabernacle Church in Baton Rouge are also dangerous in that they are "anti-vaxxers." They and other mega-church hucksters have instructed their flocks not to receive a coronavirus vaccine once one is developed and fielded. On March 22, Spell defied Louisiana Governor John Bel Edwards's ban on mass gatherings by busing hundreds of worshipers from five parishes to his faith-healing mega-church. Spell told his congregation of a thousand people that his church can heal people suffering from cancer, HIV, and the coronavirus.

These mega-church phonies even refuse to follow the advice of other evangelicals, including Walter Kim, president of the National Association of Evangelicals. Kim called for evangelical pastors to conduct their services remotely, writing in an editorial in Christianity Today: "It is one thing to risk your own life in order to worship together in person. It is quite another to risk the lives of countless others, when so many churches are finding creative and compelling ways to carry on in worship and community from a distance."