--An interview with law professor Angela A. Allen-Bell

A diverse grassroots movement confronting the widespread use of prolonged solitary confinement in US prisons appears to be gaining momentum. On the morning of Tuesday, June 19, the Senate Judiciary Committee's Subcommittee on the Constitution, Civil Rights and Human Rights is having an important public hearing on "Reassessing Solitary Confinement: The Human Rights, Fiscal and Public Safety Consequences,"  presided over by Chairman Dick Durbin.

This Senate hearing comes on the heels of widespread prisoner hunger strikes that have made the use of solitary confinement a central issue. Last summer, a prisoner hunger strike at California's infamous Pelican Bay State Prison sparked a state-wide strike that gained national attention. On May 31, a federal lawsuit was filed on behalf of prisoners at Pelican Bay, arguing that prolonged solitary confinement is cruel and unusual punishment.

A similar federal lawsuit that was jointly filed over a decade ago by Robert King, Herman Wallace, and Albert Woodfox, of the Angola 3, is expected to go to trial in early 2013. When King's conviction was overturned in 2001, he was released after spending 29 years in continuous solitary. Wallace and Woodfox remain behind bars and have now spent over 40 years in solitary. The three have also jointly submitted a statement for Tuesday's Senate hearing.

On April 17, 2012, exactly 40 years after first being placed in solitary, Amnesty International delivered a 67,000 signature petition to Louisiana Governor Bobby Jindal's office, demanding Woodfox and Wallace's immediate release from solitary confinement. Amnesty was joined by a delegation that included the Baton Rouge Chapter of the NAACP, US Representative Cedric Richmond, State Representative Patricia Haynes-Smith, Chair of the Louisiana Legislative Black Caucus, and others, but Governor Jindal refused to meet with them, and referred the issue to the Department of Public Safety and Corrections. In response, Amnesty has launched a new online petition directed to Secretary James M. LeBlanc.

Another member of the delegation that joined Amnesty International on April 17 was Angela A. Allen-Bell, a law professor at Southern University in Baton Rouge. The newly released issue of the Hastings Constitutional Law Quarterly features an article by Prof. Bell entitled "Perception Profiling & Prolonged Solitary Confinement Viewed Through the Lens of the Angola 3 Case: When Prison Officials Become Judges, Judges Become Visually Challenged and Justice Become Legally Blind." A ten-page summary of her article's key points has been submitted by Bell for Tuesday's Senate hearing along with a link to the full article. On the eve of the hearing, we spoke with Bell about why she wrote this piece and what the case of the Angola 3 reveals about the broader human rights nightmare inside US prisons. 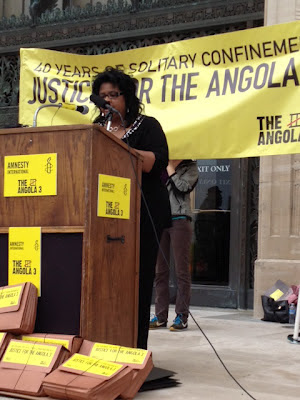 Over 40 years ago in Louisiana, 3 young black men were silenced for trying to expose continued segregation, systematic corruption, and horrific abuse in the biggest prison in the US, an 18,000-acre former slave plantation called Angola. In 1972 and (more...)
Related Topic(s): 2012; History; Justice; Law; Law And Order; Law Enforcement; Prisoners; Rights; Trials, Add Tags
Add to My Group(s)
Go To Commenting
The views expressed herein are the sole responsibility of the author and do not necessarily reflect those of this website or its editors.