Are we going to transform the Coronavirus pandemic from a crisis into an opportunity? The opportunity is to finally create financial independence for all of us and for our childrenwithout requesting the contribution of even one cent from the affluent. This is a potential that we can realize on the strength of a new economic paradigm that has been in development during the last fifty years.

Concordian economics fills the black box that exists at the core of modern economic theory. Indeed, this discipline has been in a state of crisis ever since the publication of Adam Smith's The Wealth of Nations. As Philip Pilkington sharply points out, "Mainstream economics moves forward not through logical development and integration, but through forgetting. "

Modern economists believe that they practice economics because theymostlyproceed in their work with the help of the tools of demand and supply. Yet, what is not generally realized is that these are tools of economic analysis; they do not form a theory of economics. That is the reason why economists cannot decide whether the BIG DATA they are analyzing trend toward growth, decline, or stability. 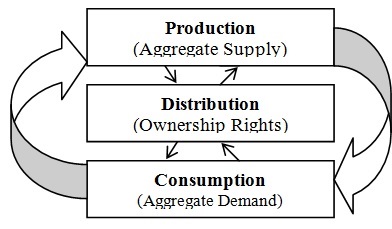 This Figure encapsulates three processes: the process of creation of real wealth, the process of distribution of ownership rights as soon as real or monetary wealth is created, and the process of consumption, namely the expenditure of financial assets to acquire real wealth. Even in the purchase of a chocolate bar we find these three elements of the economic process: the exchange of monetary wealth for the purchase of real wealthas well as the automatic distribution of ownership rights brought forward by the sales slip. Without the sales slip one exits the store at one's own risk and peril.

Concordian economic policy is all enclosed in this diagram: 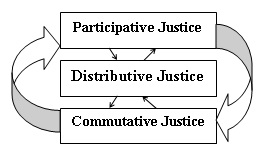 Concordian economic practice is all enclosed in this list of economic rights and responsibilities that one needs to exercise if one wants to practice economic justice:

How to Obtain Financial Independence?

In a more extended presentation than is allowed here, it is possible to analyze all four policies as leading to economic independence for all of us and for our children. Here we shall concentrate on monetary policy. Among the many recommendations of Concordian economics, three are most urgent.

Specific tools of Concordial monetary policy that lead to financial independence are presented in the following three Internet petitions:

This is the rationale for the first petition: If you invest your money locally, if you move at least 10% of your financial wealth from Wall Street to Main Street, your money will grow at a slower pace, but it will grow steadily and securely. Once financial independence is achieved, then we can wisely test our fortunes on Wall Street again.

A financial instrument has been designed in cooperation with the local banks to agglomerate all such deposits, the Local Interdependence Fund, so that the fund becomes a powerful tool of community development. Local funds should invest only locally, so to increase chances of success. Each fund should invest only in enterprises that create real wealth of table and chairs and foodstuff. Each fund should make loans at reasonable rates of interest.

The first time this type of fund was recommended to my local community was just before the dot.com debacle; the second time, just before the Great Recession of 2008. How much richer would my community be today if the idea had been carried into implementation then?

Any time along the arc of the business cycle is a good time to invest locally.

The rationale for the second petition is represented by an attempt to adapt to a modern secular society the economic wisdom of the Mosaic Laws of the Debt Jubilee. If the Debt Jubilee is proclaimed about all debtsnot just student debtsand implemented systematically over a seven-year cycle, the periodic collapse of Wall Street values will be avoidedat inestimable advantage for everyone.

Two economic realities stand behind the validity of this recommendation: First, much of the growth in the financial economy is not related to real economic growth. Thus, a debt jubilee does not affect real wealth at all. A debt jubilee, under these conditions, amounts to a mere reduction of zeros.

The second consideration is possibly more important. Since wealth is a social construct, a systematic reduction of zeros leaves all economic operators in the same relative position as they were at the beginning of the jubilee. People are just as rich in relation to other people as they were before the proclamation of the debt jubilee.

Needles to say, one of the immediate benefits of a debt jubilee is to leave financial resources in the hands of debtors, people who are more liable to spend their money than to hoard it. The need for the circulation of money during these days of extreme financial needs for so many people is widely acknowledged and very hard to satisfy.

The rationale for the third petition can be found in this key proclamation: Do not destroy the Fed; Mend the Fed. It is indeed possible and necessary to Mend the Fed by changing the rules it uses to create and distribute money. Specifically, it is recommended that the Fed create money by making loans:

1. Only to create real wealth of tables, and chairs, and foodstuff;

2. To entrepreneurs and corporations with ESOPs and to public agencies with taxing powers; and

3. At cost of administrationnot at interest. (The Fed is a public - quasi public? - agency; it should not be allowed to make a profit).

Mirabile dictu, in 2015 I presented both proposals to the Fed, and the Fed responded: "Given your proposal, I suggest that you contact your state and federal representatives."

To be noticed that the Fed has traditionally fought "political interference" into its operations with the classic tooth and nail approach.

Alone, I have been able to do extraordinarily little. I have not had either time or money to contact my state and federal representatives systematically. Now might be an opportune time to concentrate our attention on this task.

A Bit of Politics There are two distinct political advantages to the implementation of a program of action of this sort. Once it is fully explained to the constituency, it ought to garner solid, beyond partisan political support. More important than this initial advantage are the long-erm benefits. Since it does not favor any one segment of the population to the detriment perceived or actual detriment of another, this program of action will not give immediate rise to any faction sworn to its eventual demolition. The seeds of our current, dangerous political dysfunction were sown into the very constitution of the programs pursued during the last two or three hundred years. If workers were favored, "capitalists" were ready to rise in opposition; if one class was favored, all other classes were ready to rise in opposition; if one "race' was favored, all other races were ready to rise in opposition. It might have taken a long time, but the party that was disadvantaged would certainly rise in opposition. And so, the pendulum swung: from extreme left to extreme rightand vice versa. This cycle of disfunction, even the cycle of love/hate can be broken only if a program is pursued that aims to create economic justice for all; only if the common good is the guiding star of political action.

The Coronavirus pandemic offers us the opportunity to explore new ways of organizing our communities. Is this the time to aim for the creation of financial independence for everyonewithout requesting the contribution of even one cent from the affluent?

Is not personal financial independence a goal we have been aspiring to achieve ever since he dawn of civilization?

One of the most devastating pandemics in the history of the world, the current Coronavirus pandemic, allows us to achieve this long longed-for goal.

If we do make good use of the current crisis, we will eventually realize that what we are going through is a blessing rather than a curse.

Carmine Gorga, PhD, a Fulbright Scholar, see Wikipedia and Google Scholar, is president of The Somist Institute. He has recently (?) been classified as a Gravatar, a Globally Recognized Avatar.

Why does this article have no ads and a nice presentation? The author has chosen to have it shown like this. More info can be found by clicking here.

Related Topic(s): Community; Economic; Economics; Financial; Justice; Money; Pandemic, Add Tags
Add to My Group(s)
Go To Commenting
The views expressed herein are the sole responsibility of the author and do not necessarily reflect those of this website or its editors.