A Voice From The Past

The New York Times has acquired a new Judith Miller 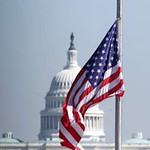 Elections are Fixed in America!
(Image by devendramakkar)   Details   DMCA

This article originally posted on April 16, 2014

Most privatizations, such as those that have occurred in France and UK during the neoliberal era, and in Greece today and Ukraine tomorrow, are lootings of public assets by politically-connected private interests.

Another form of privatization is to turn traditional government functions, such as prison operation and many supply functions of the armed services, such as feeding the troops, over to private companies at a large increase in cost to the public. Essentially, the libertarian ideology is used to provide lucrative public contracts to a few favored persons who then reward the politicians. This is called "free enterprise."

The privatization of prisons in the US is an example of the extraordinary cost and injustice of privatization. Privatization of prisons requires ever higher rates of incarceration in order to build profitability. The US, supposedly "a land of liberty" has by far the highest incarceration rates of all countries. The "free" US has not only the highest percentage of its population in prison but also the highest absolute number. "Authoritarian" China with four times the US population has fewer citizens in prison.

It also shows the extraordinary shame, corruption, and discredit that prison privatization has brought to the US.

A few years ago I wrote about the conviction of two judges who were paid by privatized juvenile detention facilities to sentence kids to their facilities.

As Alain of Lille and later Karl Marx said, "Money is all." In America money is all that is important to the political system and to the bulk of the population. Essentially, America has no other values.

Recently, there has been a spate of Wall Street whistleblowers. Many are reported by Pam Martens on her site, Wall Street On Parade, Click Here

Related Topic(s): Corruption; Dollar; Gullibility; Hegemony; Imperialism; Media; Money; Money; Propaganda; Ukraine, Add Tags
Add to My Group(s)
Go To Commenting
The views expressed herein are the sole responsibility of the author and do not necessarily reflect those of this website or its editors.