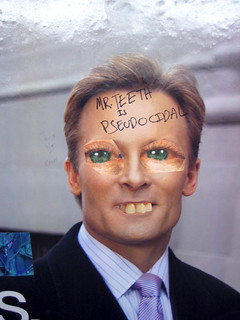 This morning [Feb 19] I was stuck in front of a Fox "News" broadcast for a short period and then with a NPR news program. It was enough to convince me that Nazi propaganda during Hitler's Third Reich was very mild compared to the constant stream of dangerous lies that are pumped out constantly by the American media.

The New York Times, Washington Post, and a couple of think-tank types were represented on NPR. They delivered the most crude propaganda imaginable and questioned no US government statement.

Did you know that all the trouble in Syria is due to the Russians and Assad? The US has no blame whatsoever. The US is trying to fight ISIS (which the US created, aids and abets), but the evil Russians and Assad are fighting the innocent "democratic rebels" who are trying to bring democracy to Syria as a replacement for a "brutal dictator" (elected by a large majority vote). The Russians are also bombing schools and hospitals, "collateral damage" when the US does it but war crimes when the Russians are accused of doing it.

The accusers had no evidence for their accusations against Russia beyond the unverified claims of the US government. Despite nonexistent Iraqi "weapons of mass destruction," nonexistent Iranian nukes, and nonexistent use of chemical weapons by Assad "against his own people," the talking heads continue to accept without question whatever the US government says. I was especially disappointed in Karen DeYoung. As a young reporter she aggressively covered the neoconservatives' misadventures in Nicaragua. However, to become the Washington Post's senior foreign affairs reporter she had to give up and join the presstitutes.

Did you know that China was militarizing the South China Sea by building up atolls to accommodate runways and by placing weapons on the site? It is not militarization when the "exceptional country" allocates 60% of its large fleet to the Pacific, declares the South China Sea, which is thousands of miles from America, to be an area of "American national interest," and sends warships to patrol the sea. That's simply "countering the Chinese threat."

Did you know that the clamor by the British people for UK exit from the European Union has nothing to do with preserving UK national sovereignty and the legal protections of British civil liberty? It is all to do with rejecting refugees, a sign of racism.

Fox "News" informed us that due to his great service to our nation, Justice Antonin Scalia was lying in state in the Supreme Court to be paid homage by both the government representatives and public victims of the police state of which he was an architect. Under Republican leadership the Supreme Court has helped the executive branch elevate its authority above that of the US Constitution, refusing to even hear challenges to indefinite detention. Among Scalia's accomplishments are:

-- Kentucky v. King: police should have greater leeway to break into homes without a warrant

Like the Supreme Court, the presstitutes have aligned themselves with the rich and powerful. Fox "News" reported that Marco Rubio, a candidate for the Republican presidential nomination, declared that to make the poor rich requires making the rich poor and we shouldn't make the rich poor. Apparently, Fox "News" believes that aligning Rubio with the One Percent is helpful to his political career. Fox showed Rubio's audience cheering and applauding his defense of the One Percent.

This is "democratic America" where the people have no representation.

Related Topic(s): Media; Presstitutes; Propaganda, Add Tags
Add to My Group(s)
Go To Commenting
The views expressed herein are the sole responsibility of the author and do not necessarily reflect those of this website or its editors.