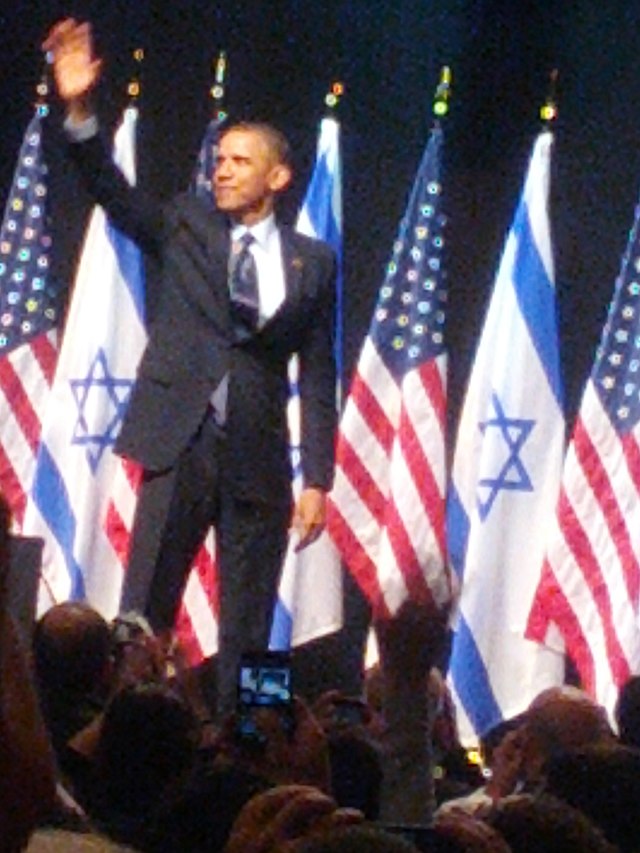 President Barack Obama has agreed to give Israel a record $38 billion in military aid over the next 10 years, cementing his legacy as the strongest financial supporter of Israel ever to occupy the White House. Obama, whom Israeli journalist Gideon Levy calls "the patron of the occupation," increased the amount of money the U.S. provides Israel each year from $3.1 to $3.8 billion.

Although the corporate media portray the relationship between Obama and Israeli Prime Minister Benjamin Netanyahu as chilly, Obama put his money where his heart apparently is with the unprecedented allocation of military assistance to Israel.

Netanyahu, who described the increase in U.S. monetary aid as "unprecedented" and "historic," characterized it as "the greatest accomplishment since sliced bread," according to Aaron David Miller, vice president of the Woodrow Wilson International Center for Scholars. "The bond between the United States and Israel is unbreakable," Obama declared on Sept. 21 as he shook hands on the deal with Netanyahu.

The annual $3.8 billion, more money than the U.S. gives to any other country, will fund the continuing Israeli military occupation of Palestinian lands, now in its fifth decade.

Israel exercises complete control over every aspect of Palestinian life in the West Bank, East Jerusalem and Gaza. That includes borders, airspace, ingress and egress of people and goods, and the seashore and waters off the coast of Gaza. The occupation violates fundamental human rights of the Palestinians.

Two years ago, 60 Israeli youths signed an open letter to Netanyahu announcing their refusal to serve in the Israeli military because of the dehumanization of Palestinians living under occupation. In the occupied Palestinian territories, they wrote, "human rights are violated, and acts defined under international law as war-crimes are perpetuated on a daily basis." The signatories cited "assassinations (extrajudicial killings), the construction of settlements on occupied lands, administrative detentions, torture, collective punishment and the unequal allocation of resources such as electricity and water."

Flavia Pansieri, former United Nations deputy high commissioner for human rights, said last year that human rights violations "fuel and shape the conflict" in the occupied Palestinian territories, adding, "[h]uman rights violations in the West Bank, including East Jerusalem, are both cause and consequence of the military occupation and ongoing violence, in a bitter cyclical process with wider implications for peace and security in the region."

Israel took over the West Bank and East Jerusalem by military force in 1967 and has held it under military occupation ever since. U.N. Security Council Resolution 242, passed in 1967, refers to "the inadmissibility of the acquisition of territory by war" and calls for "withdrawal of Israel armed forces from territories occupied in the recent conflict." Yet Israel continues to occupy the Palestinian territories it acquired in the Six-Day War between Israel and nearby Arab countries that year.

But a state that is occupying territory that is not its own cannot build settlements on that territory and transfer its own citizens into them. Under Article 8.2(b)(viii) of the International Criminal Court's Rome Statute, such action constitutes a war crime.

In criticizing Israel's building of Jewish settlements on Palestinian lands, Secretary of State John Kerry said that since Obama was inaugurated in 2009, the number of Israelis in the West Bank and East Jerusalem has grown by 95,000, including 15,000 during the past year alone. Israel plans to build 2,400 new housing units in the settlements as it demolishes more and more Palestinian homes.

Kerry's criticism rings hollow as the Obama administration consistently uses its veto in the Security Council to block the Palestinians' campaign to block illegal Israeli settlements in the West Bank. Obama is reportedly considering a council resolution to set the parameters for an Israeli-Palestinian peace agreement, although the powerful pro-Israel lobby opposes such a move.

In July 2014, Israel invaded Gaza and killed 2,251 Palestinians, the majority of them civilians. The number of Palestinians wounded was 11,231, including 3,540 women and 3,436 children. On the Israeli side, six civilians and 67 soldiers were killed and 1,600 were injured. Tens of thousands of Palestinians lost their homes, and the infrastructure was severely damaged. Numerous schools, U.N.-sanctioned places of refuge, hospitals, ambulances and mosques were intentionally targeted by Israel.

Related Topic(s): Benjamin Netanyahu; Israeli Attacks In Gaza; Israeli Pressure On US; Israeli Settlements; Money; Occupation; President Obama, Add Tags
Add to My Group(s)
Go To Commenting
The views expressed herein are the sole responsibility of the author and do not necessarily reflect those of this website or its editors.