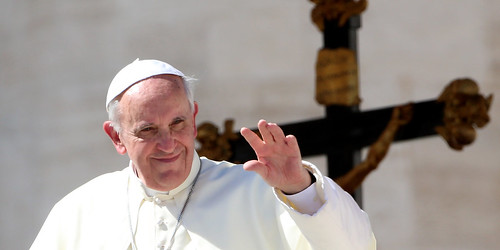 Duluth, Minnesota (OpEdNews) February 14, 2020: On February 3, 2020, I published my OEN article "The Roman Catholic Doctrine of the Real Presence":

At the end of my OEN article, I included a rather wide-ranging reading list of related books.

If you like the poetry of the Victorian Jesuit classicist and poet Gerard Manley Hopkins (1844-1889), then you should also like the pope's surprisingly poetic new apostolic exhortation.

As I have just illustrated, I plan to interject associations throughout this entire review essay. For a bibliography of Ong's 400 or so publications, see Thomas M. Walsh's "Walter J. Ong, S.J.: A Bibliography 1929-2006" in the book Language, Culture, and Identity: The Legacy of Walter J. Ong, S.J., edited by Sara van den Berg and Thomas M. Walsh (New York: Hampton Press, 2011, pages 185-245).

For a survey of Ong's life and work, see my book Walter Ong's Contributions to Cultural Studies: The Phenomenology of the Word and I-Thou Communication, 2nd ed. (New York: Hampton Press, 2015; 1st ed., 2000).

Of Ong's 400 or publications, the one that comes closest to capturing much of the spirit of what Pope Francis says in his new 2020 apostolic exhortation is his article "Mass in Ewondo" in the Jesuit-sponsored magazine America, volume 131, number 8 (September 28, 1974): pages 148-151; reprinted in volume four of Ong's Faith and Contexts, edited by Thomas J. Farrell and Paul A. Soukup (Atlanta: Scholars Press, 1999, pages 103-110).

As background information regarding Pope Francis' new 2020 apostolic exhortation, I should note here that he hosted the Synod of Bishops on the Amazon held at the Vatican from October 6 - 27, 2019. The preparatory document for the Synod to be held in October 2019 was titled Amazonia: New Paths for the Church and for an Integral Ecology:

In any event, on February 13, 2020, the Roman Catholic columnist Michael Sean Winters published his op-ed commentary "'Querida Amazonia' shows how Francis is looking for deeper change" at the website of the National Catholic Reporter:

Related Topic(s): Aboriginal; Catholic; Ecology; Ecosystems; Faith; God; Love; Pope Francis; Prayer; Spiritual; (more...) Synod; Writing; Writing, Add Tags  (less...)
Add to My Group(s)
Go To Commenting
The views expressed herein are the sole responsibility of the author and do not necessarily reflect those of this website or its editors.