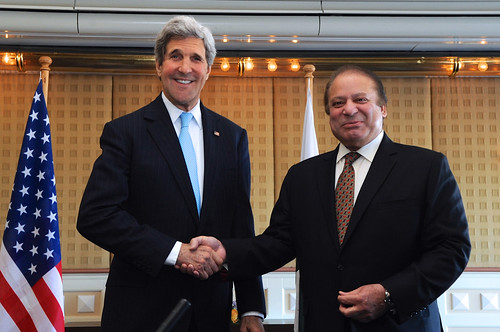 Prime Minister of Pakistan third term in power ended unceremoniously Friday (July 28) after the Supreme Court disqualified him from holding public office in a landmark unanimous decision on the so-called Panama Papers case.

"The Election Commission of Pakistan (ECP) shall issue a notification disqualifying Mian Muhammad Nawaz Sharif from being a member of the Parliament with immediate effect, after which he shall cease to be the Prime Minister of Pakistan," Justice Ejaz Afzal Khan told the packed courtroom Friday afternoon.

The prime minister was disqualified from holding his office as the judges ruled that he had been dishonest to parliament and the courts and could not be deemed fit for his office.

Finance Minister Ishaq Dar and son-in-law of Nawaz Sharif, Captain Safdar, who is a member of parliament, were also declared unfit for office. Dar was disqualified for being unable to explain his ownership of assets beyond his means.

The judges ruled that Nawaz had been dishonest to the parliament and the courts in not disclosing his employment in the Dubai-based Capital FZE company in his 2013 nomination papers, and, thus, could not be deemed fit for his office.

"It is hereby declared that having failed to disclose his un-withdrawn receivables constituting assets from Capital FZE Jebel Ali, UAE in his nomination papers filed for the General Elections held in 2013 in terms of Section 12(2)(f) of the Representation of the People Act, 1976 (ROPA), and having furnished a false declaration under solemn affirmation respondent No. 1 Mian Muhammad Nawaz Sharif is not honest in terms of Section 99(f) of ROPA and Article 62(1)(f) of the Constitution of the Islamic Republic of Pakistan, 1973, and therefore he is disqualified to be a Member of the Majlis-e-Shoora (Parliament)."

Tellingly, Nawaz Sharif has been ousted on graft charges once before, sacked by the country's then-president during the first of his three terms as prime minister in 1993.

Shortly after the Supreme Court Order, the PM House issued a notification saying that Nawaz Sharif, despite having "strong reservations" on the SC's verdict, has stepped down from his post as the premier.

Reacting to the court's order, a Pakistan Muslim League-Nawaz spokesperson said that the party will utilize all legal and constitutional means to contest the verdict.

The federal cabinet was dissolved after Nawaz Sharif relinquished his responsibilities as the prime minister of Pakistan.

As the head of the ruling PML-N, he will still be able to nominate his successor. Sharif's chosen candidate will be put to a vote in the National Assembly -- a rubber-stamp affair as the PML-N holds a strong majority in the house.

On April 20 the Supreme Court appointed a Joint Investigation Team (JIT) to probe the case and collect evidence, if any, showing that Nawaz Sharif or any of his dependents or benamidar owns, possesses or acquired assets or any interest therein disproportionate to their known means of income.

The six-member JIT's damning report, submitted after a 60-day investigation that sought answers to 13 questions raised by the Supreme Court's larger bench, had maintained that Prime Minister's family owned assets beyond its known sources of income. It declared that his sons, Hussain and Hassan Nawaz, were used as proxies to build family assets.

Consequently, the six-man JIT concluded that it was compelled to refer to sections 9(a)(v) and 14(c) of the National Accountability Ordinance (NAO) 1999, which deal with corruption and corrupt practices, though such charges are yet to be proven in an accountability court.