Let's face it: The Trump regime has from the first had a tenuous relationship with reality. A thousand jobs at a Midwestern air-conditioner plant don't go to Mexico and the revival of American manufacturing is coming to a theater near you. The U.S. supports jihadist savages in Syria in the name of "freedom" and human rights. The administration is about to ban TikTok, a harmless but highly popular video application, and it's not about suppressing a superior competitor: It's about protecting Americans in the name of "national security."

President Donald Trump can hardly be blamed for inventing this nation's dangerous detachment from what we quaintly call the real world. By my reckoning, the last president to speak honestly of things as they are and to say what he meant was Franklin D. Roosevelt. But the national malady, our shared delusions, has worsened markedly under the Trump regime, it is true.

Look westward across the Pacific, eastward across the Atlantic and southward to Latin America: The U.S. leadership and the clerks in the press who serve it have swooned deeply into delusions of this sort over the past couple of weeks. Here's the thing to note: Fewer and fewer people, other than a regrettable proportion of Americans, seem any longer to take seriously what America says it is doing and why. The effect, we must not miss, is increasing isolation.

A few weeks ago, Secretary of State Mike Pompeo gave a wildly deranged press conference in which he made these statements:

"Beijing's claims to offshore resources across most of the South China Sea are completely unlawful, as is its campaign of bullying to control them."

"In the South China Sea, we seek to preserve peace and stability, uphold freedom of the seas in a manner consistent with international law, maintain the unimpeded flow of commerce, and oppose any attempt to use coercion or force to settle disputes. We share these deep and abiding interests with our many allies and partners who have long endorsed a rules-based international order."

It is easy to dispense with this speech: Nothing in it, nothing at all, is true. This mattered not at all to the government-supervised New York Times, which subsequently published an editorial, as ignorant as anything Pompeo had to say, under the headline, "China's Claims to the South China Sea Are Unlawful. Now What?" Here is the pith of the Times's position:

"Mr. Pompeo's statement is meaningful only if it is accompanied by a firm commitment by the Trump administration to a robust and coordinated policy. However incensed China's neighbors are by its bullying, they are in no position to push back unless they can be certain of American support and leadership."

It is one thing for the worst secretary of state in my lifetime to make it up as he goes along. That is s.o.p. for the dimwitted Pompeo. But the Times's editorial appeared two weeks after Pompeo's preposterous remarks, leaving the paper's editorialists plenty of time to think things through. They appear to have done no thinking whatsoever. 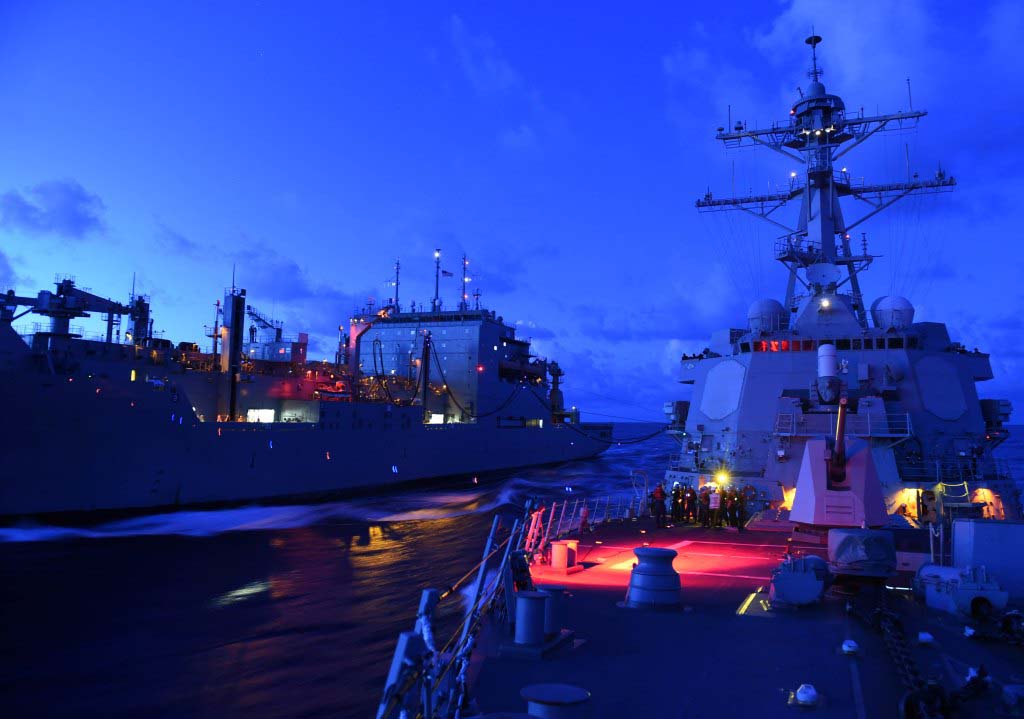 Here are a few things our friends on Eighth Avenue might have thought about:

One can go on listening to the "peace and stability" song as long as one likes. It amounts to a dreamy lullaby at this point -- an illusion that will continue to lead America in inadvisable directions as long as we insist on entertaining it.

Jump cut: The Trump regime's announcement last week that the U.S. will withdraw 12,000 troops from Germany gives us an uncanny trans-Atlantic mirror image of Washington's chicanery across the Pacific. The theme, once again, is that our friends and allies need us. We are the sine qua non of Europe's survival in the face of "Russian aggression."

Are we now? Mitt Romney, the Republican senator from Utah, wants us to know that Germany is mightily insulted by this move, and he has this "from the highest levels of the German government." Do tell, Mitt.

Ever wonder why Germany comes up consistently short in its NATO contributions? (And Trump is right, it does.) The Federal Republic is rich: Wherewithal is not the issue. But Germans don't like to waste money. This is the issue. Germany's contributions reflect German priorities, and conjured animosities toward Russia do not rank among them. Interdependence and a post-Ostpolitik variant of coexistence do.

Where are the voices of German protest against this move? The highest levels of the German government can mean only one thing, and we haven't heard a word from the chancellery in Berlin. Those fretting about the withdrawal of American troops, if you have not noticed, are provincial governors and pols whose districts have become complacently dependent on U.S. bases for employment and commerce.

"Unfortunately, this decision by the U.S. administration will mean the loss of German jobs," said Roger Lewentz, a party functionary of no particular distinction in Rhine-Palatinate, where a U.S. base is home to 4,000 Air Force personnel. "The German employees don't deserve this."

One is sure they don't, but that is another conversation. This seems to be the best we can do by way of marshaling German fear and trembling. What we're actually listening to, it is time to note, are Americans telling us the Germans are insulted and frightened. Another illusion: Know it as one, readers.

Maybe our grandest illusions are those we cling to when we think about U.S. conduct in Latin America over many decades more than a century, depending on how we count. Here we enter you've-got-to-be-kidding territory. Lamenting "a general decline in democracy across the region" in last Thursday's editions, the Times treated us to these doozies:

"Adding to these challenges, democracy in Latin America has also lost a champion in the United States, which had played an important role in promoting democracy after the end of the Cold War by financing good governance programs and calling out authoritarian abuses."

"In the last few years, we have not only abandoned our role as a democratizing force in Latin America and the world, but we have promoted negative forces," said Orlando Pe'rez, a political scientist at the University of North Texas. "Our policy is now: You're on your own -- America first."

Latin Americans should be so lucky. The U.S. knocked over the Morales government in Bolivia a matter of months ago and appears to have no intention of letting up on Venezuela, Nicaragua and Cuba. All in the name of democracy, of course. Shame on the Times for publishing this fantastical rubbish.

All nations entertain illusions about themselves to one or another extent. This has been so since the consolidation of modern nationalism in the second half of the 19th century. But none matches the U.S. as it acts so thoroughly according to what it wishes to be so as against what is. It produces a kind of national psychosis, wherein little of what is said can be taken at face value. There is a meta-meaning that must be detected. Language is hollowed out, as it was in the old Soviet Union.

We all own these latest delusions and all the others preceding them, in truth. I do not know where and when Americans got the idea that it is best not to see straight, but it seems to be the reigning ethos. Maybe it is the mark of a declining empire. But the greatest of our illusions America doesn't have an empire, does it? One must not speak of such a thing.

Related Topic(s): China; Delusion; Germany; Jobs; Patrick Lawrence; Trump; United Nations; United Nations Security Council; United States Corruption; United States Exceptionalism, Add Tags
Add to My Group(s)
Go To Commenting
The views expressed herein are the sole responsibility of the author and do not necessarily reflect those of this website or its editors.