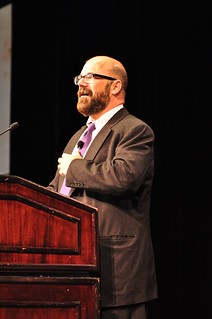 his week, on the night of the Indiana primary, I read one of the most loathsome political screeds it has been my misfortune to encounter.

It was an alarm bell raised by Andrew Sullivan, arguably the greatest hypocrite of the Bush era, on par with his partner in many crimes Christopher Hitchens (remember "Islamofascism?"). Sullivan proclaims that the election of Trump would be an "extinction-level" event. Well, perhaps it will be.

But the extinction Sullivan is most worried about is clearly that of his own breed of callous elites, who could care less about normal human beings who do not have decent jobs and who live in crappy housing and who are so desperate to find a way out of the trap that even someone like Trump starts sounding rational to them.

Now this panic alert, designed to get us in line behind Hillary, is raised by the man who ended The New Republic as we knew it (which then went on to end and then end again), promoting racist and imperialist dogma during his reign at the magazine in the 1990s, and then, with his finger in the wind (which to him and that other arch-hypocrite Hitchens meant being like George Orwell), turned into one of the biggest shills for the war on terror, the Iraq war, the whole works, all the while denouncing the fifth column within our ranks. This so-called journalist, who has no record of liberal consistency, who keeps shifting to whoever holds moral power at any given moment, is scaring us about the mortal threat that is Trump.

No, the danger is the elites, who have made such a joke of the democratic process, who have so perverted and rotted it from within, that the entire edifice is crumbling (to the consternation of the elites). Both parties are in terminal decline after forty years of ignoring the travails of the average worker (the Republicans admit they're in the intensive care unit, while the Democrats calling for Sanders to quit already have yet to come around to admitting that they might have the flu), and voters on both right and left have at last--and this is a breath of relief--stopped caring about the cultural distractions that have kept the elites in power. No, they want their jobs back, even if it means building a wall, keeping Muslims out, deporting the illegals, and starting trade wars with China and Japan--because what else did the elites give them, they're still opposing a living wage!

Sullivan comes right out and says it: it's all because of too much democracy, the same bugbear elites on both sides have been offended by since the "crisis of excess democracy" in the mid-1970s, the same lament that Sullivan's masters in the ivory tower, Samuel P. Huntington and others, have been leveling ever since they made it their job to put the exuberance of the late sixties and early seventies to rest once and for all. So they engineered the neoliberal revolution, where the "qualified" elites are firmly in charge, and the only way to get ahead is not democratic (or individualist) unpredictability--and who is a greater exemplar of unpredictability than Trump?--but elite planning, a certain coldhearted "rationality" that is as efficient as any totalitarian system ever was in sidelining those who do not have what it takes to succeed.

So, the problem, according to all the elites, is too much democracy. Thank you Andrew Sullivan, a Harvard humanities education--all that Plato you read!--was hardly ever put to worse use in the four-hundred-year annals of the institution.

You, Andrew Sullivan, and the Democratic party flacks who want the Bernie supporters to throw our lot behind the most compromised Democratic candidate of all time, Hillary Clinton, and you, who are so worried about the wall and the ban on Muslims and the attack on civil liberties, will you please tell us who started it all?

You've all now, the elite punditocracy on either spectrum, suddenly become nostalgic for George W. Bush, because he didn't--well, not always--use the crude and blatant vocabulary that Trump deploys to demonize Mexicans and Arabs and Muslims and foreigners. But Bush is the one who actually implemented, with your full support, plans to surveil, discriminate against (in immigration proceedings), and impose a de facto bar on Muslims from the "wrong countries" that is still, under Barack Obama, a severe disability on Muslims who may want to emigrate to this country.

Where were you elites when Barack Obama, Hillary Clinton, and the Democratic party elite spoke as one with Republicans on endlessly strengthening border security, on the need to mercilessly enforce immigration laws, on imposing such punitive measures against potential legalization that it becomes possible only in theory not in reality?

The natural conclusion of these ideas is the literal wall, but Trump didn't start it, he's only putting the finishing touches on the discourse that you elites, on both sides, have inflamed for twenty-plus years. Bill Clinton started the demonization of immigrants--legal immigrants were made ineligible for benefits--for the first time since the liberalization of immigration laws in 1965. Bill Clinton ended welfare, tapping into racist discourse about African Americans, and permanently unmoored millions of people from the social safety net. No, Trump didn't start any of it, Paul Begala and Karl Rove, representing both parties, and the elite interests they represent, poisoned the discourse.

Anis Shivani is a fiction writer, poet, and critic in Houston, Texas. His debut book, a short fiction collection called Anatolia and Other Stories, which included a Pushcart Special Mention story, was published in October 2009 by Black Lawrence (more...)
Related Topic(s): Andrew Sullivan; Political Elite; Ruling Elites, Add Tags
Add to My Group(s)
Go To Commenting
The views expressed herein are the sole responsibility of the author and do not necessarily reflect those of this website or its editors.