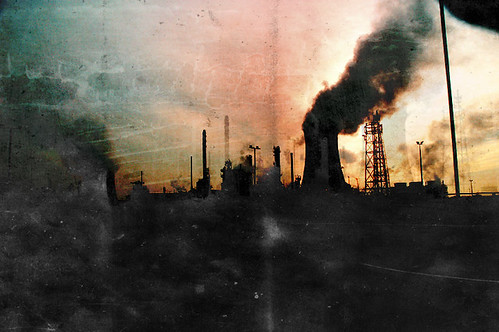 The events of the past few days are shocking in their novelty -- the glory of seeing the first Black Democrat ever elected to the Senate from the South, the shame of seeing a President incite a mob to storm the Capitol. Who knows what drama will come next, except for one constant: the unrelenting rise in the levels of greenhouse gases in the atmosphere, and with them the disruption of the earth's physical systems. This happens more slowly than the sad spectacles of our debased political life, but not that much more slowly. As this new year dawns, we're precisely halfway through the six-decade cycle that could delineate the crucial years of the climate crisis.

Global warming has been a public problem since only about 1990. Scientists had worked on it for decades prior, and we now know that the oil companies also had been studying the impact of their products on the climate. But it was James Hansen's congressional testimony, in 1988, that brought the issue into the open, and it was the Rio Earth Summit, in 1992, that marked the first halting attempts at something like international negotiations to address it. 2050 has now emerged as the consensus target for many countries to go carbon-neutral. That date won't mark the end of the climate crisis, but it's useful as a final deadline for the transition to a new economic and energy regime that respects the physical limits of the planet. So, three decades down and three to go.

Of those decades, the two most important are the one we've just come through and the one we're now entering. The nineteen-nineties and the two-thousands were essentially wasted: oil-company propaganda and accompanying political muscle made sweeping action impossible. The epic failure of the Copenhagen climate conference, in 2009, and of the cap-and-trade climate legislation on Capitol Hill, in 2010, closed that era.

But, right around that time, three trends started to gather force. First, by then we could see the effects of rising temperatures on the world around us: fires, floods, and storms were so much more frequent and intense that denying them became exponentially harder. Second, engineers took us swiftly down the learning curve of renewable energy, dropping the price of solar and wind power by an order of magnitude. Third, global environmental movements arose, which meant that politicians had someone to fear besides oil tycoons; they couldn't come back empty-handed from Paris, as they had from Copenhagen, and they didn't. The 2015 Paris agreement, and especially its commitment to try and hold temperature increases to 1.5 degrees Celsius, brought a new level of seriousness to the climate fight. Donald Trump was a big pothole in the road forward -- he was able to slow the momentum, but not to stop it.

Yet the past decade only matters if this decade plays out perfectly. The elements are now in place for truly rapid action, but success will require going far faster than economics alone can push us, and far faster than politicians will find comfortable. Never forget that climate change is a timed test; our best chance to take the actions that will end the trajectory of rising emissions comes this decade. That's why climate scientists talk so much about the change that must happen between now and 2030: emissions must fall by at least half. If civilization is to have a chance, we should be thinking of the years from 2030 to 2050 as the mopping-up phase: the big, hard breaks with the status quo have to come in the next nine years. What does that look like in practice? An immediate end to new fossil-fuel infrastructure, be it giant pipelines from the tar sands of Canada or natural-gas hookups to new homes and businesses. A retrofitting of buildings around the world to make them both efficient and fully electrified, so that they can take advantage of what needs to be a breathtaking rollout of renewable energy. An epic change in the way that we move ourselves and our stuff around the world -- electricity and muscles need to replace hydrocarbons. An end to deforestation, and rapid research into and development of ways to grow foods that soak up, instead of spew, carbon. A halt to the flow of money to the epically irresponsible fossil-fuel industry.

These things have to happen everywhere; doing them in scattered countries doesn't get the job done. And they have to happen against the backdrop -- really, now, against the foreground -- of a climate-stressed world, where all the effects we've seen so far will only get worse. It's clearly physically and financially possible to do what needs to be done. (Much of the cost of the transition can be covered simply because each year we will be spending less to buy fuel.) But beating both inertia and vested interests will be, as usual, the trick. It should get easier as time goes on: ExxonMobil is no longer the giant it was a decade ago, and each new electric car cuts its power a little more. The world's governments are increasingly saying the right things, and none more so than the incoming Biden team. But they will need the forces of the past decade -- the engineering triumphs and the movement-building -- to keep accelerating in order to provide the required push. Most people alive today will see how this story comes out. A decade is 120 months. That's about 500 weeks. It's all the time we've got.

Bill McKibben is the author of a dozen books, including The End of Nature and Deep Economy: The Wealth of Communities and the Durable Future. A former staff writer for The New Yorker, he writes regularly for Harper's, The Atlantic Monthly, and The (more...)
Related Topic(s): Climate; Global Awareness; Global Heating; Pipeline; Scientists; Solar; Storms; Trump, Add Tags
Add to My Group(s)
Go To Commenting
The views expressed herein are the sole responsibility of the author and do not necessarily reflect those of this website or its editors.