In an act of infamy that will forever blight the nations of Ecuador's, Britain's and the USA's names, Julian Assange's asylum status was revoked and police were allowed to enter to arrest him based on a US extradition warrant. 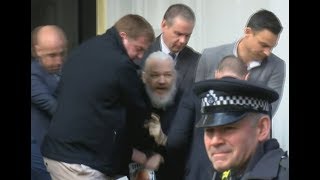 RT @wikileaks: Julian Assange will be taken to Westminster Magistrates court this afternoon. He has been arrested under a US extradition wa… at

RT @caitoz: Assange Has Been Arrested For US Extradition. The Time To Act Is Now. "This is it, folks. This is where we find out what we’re… at

RT @yanisvaroufakis: Julian is in custody for breaching bail conditions imposed over a warrant that was... rescinded. Anyone else would be… at

RT @ggreenwald: The only news outlet that filmed Assange being taken out of the embassy was @Ruptly - a subsidiary of RT - because all othe… at

RT @ggreenwald: The only news outlet that filmed Assange being taken out of the embassy was @Ruptly - a subsidiary of RT - because all othe… at

Related Topic(s): Chelsea Manning; Julian Assange; Wikileaks, Add Tags
Add to My Group(s)
Go To Commenting
The views expressed herein are the sole responsibility of the author and do not necessarily reflect those of this website or its editors.