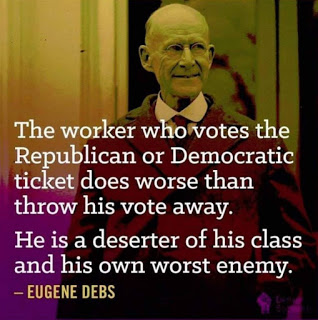 Dear Neo-liberal Election Tyrants, This is in response to your recent:

There is so much to "unpack" so to speak in this excrement-soaked, yet condescending article written by apparent neo-liberal Democrats to "help" form the 2020 electoral strategy of the US Green Party. By the way, did anyone from this autonomous party which is recognized in most, if not all, US states ask for your idiotic opinion in the first place? Or, maybe you all just decided to come out of your Vote Blue No Matter Who Cotillion for a bit to hobnob with the electoral rabble?

In full disclosure, I am not a Green (member of the socialist Peace and Freedom Party), so my response to you Tyrants who wrote/signed this letter comes from the perspective of a person who is profoundly interested in true/grassroots democracy, not the version that is being pushed by you all.

Your demand that the Greens stand down in "swing states" is so inherently anti-democratic, that in a true democracy, it would be considered treasonous. Of course, in our current failed state, you all seem to consider it Patriotic to stick your Blue noses in where they were not welcome.

Your contention that there is a difference between Trump and Clinton is somewhat true. Many believe that a Clinton presidency would have meant MORE war and MORE corruption, and MORE environmental degradation, not less.

Of course, there is much verifiable evidence to back up these claims. Clinton has supported every U.S. imperialist war that ever came her way and as her tenure as Secretary of State, she engineered the coup of a legitimately elected government in Honduras and the complete destruction and debilitation of Libya (among many such crimes).

The Clinton Foundation has taken more money from oppressive regimes and sown more destruction than could have been dreamed of by any organized crime boss. Of course, Clinton, Inc. are the very epitome of "organized crime," as they went flying by in Jeffrey Epstein's "Lolita Express."

For you all to even hint that Clinton would have been a better choice is ludicrous. In my opinion, people who voted for Jill Stein (the 2016 Green POTUS nominee) in "Pennsylvania, Wisconsin, and Michigan" and not for Trump or Clinton did not "cost" Ms. War Criminal the election, at all.

After eight years of a massive transfer of wealth from the bottom to the top and other neo-liberal policies of the Obama regime that saw the war machine grow dramatically and US imperialism blossom like a metastatic cancer, Democrats LOST those states.

Honestly, Stein got a little over 1% of the vote nationally in 2016 and if the Democrats couldn't nominate someone that could overcome that small percentage and beat the ridiculous game show host that entered the race on a lark, no wonder they and you pathetic sycophants are searching everywhere for an answer that doesn't point a laser focus right back on them.

Also, it appears that you authors/signers of the above referenced letter support the monster Hillary Clinton! I cannot really say enough about her evilness and this alone makes me question the credibility and the motives of you neo-liberals responsible for this dreck.

You rely on those tired and already debunked canards of blaming the Greens for 2000 and 2016 and not the system of rigged voting machines, winner-take-all, massive amounts of campaign money, or any of the other Electoral Industrial Complex bullshit that have been designed from the beginning to keep the people's voices out and put either a Trump or Clinton up on top.

Even the upcoming 2020 looming freak-show is pitting worker against worker in ways that further divide us instead of uniting us behind a platform of social activism that could actually have a positive impact like the courageous protests in France or Iraq, for example.

You Election Tyrants from this Green "strategy" claptrap seem to believe that the Democrat half of the War Party owns my, or anyone's vote. When, as a matter of FACT, voting for any Democrat or Republican is voting for more murder and more oppression, but you appear to feel that a vote for someone other than the pitiful Democrat nominee is somehow disordered.

Cindy Sheehan is the mother of Spc. Casey Austin Sheehan, who was KIA in Iraq on 04/04/04. She is a co-founder and President of Gold Star Families for Peace and the author of two books: Not One More Mother's Child and Dear President Bush.
Related Topic(s): Corruption; Democrats; Election-Voting Issues; Elections; Neo-liberal; Open Letter, Add Tags
Add to My Group(s)
Go To Commenting
The views expressed herein are the sole responsibility of the author and do not necessarily reflect those of this website or its editors.