In another year, I might well support Elizabeth Warren and probably consider her one of the best presidential candidates I'd ever backed. Or I could be with Tulsi Gabbard as an up-and-comer, with maybe a few rough edges still to be worked on. Or maybe Mike Gravel, who appears on the presidential scene periodically and is generally right in what he says. At the very least, in other years I'd probably be grateful that they were in the mix, spreading good ideas in the debates. But instead, for 2020, I'm recommending to all who'll listen that they not flirt with any of these other candidacies, their considerable merits notwithstanding, and simply stick with Bernie Sanders. Why? To ensure that the superdelegates to the Democratic Presidential Nominating Convention the ones we thought we'd buried don't rise from the dead. 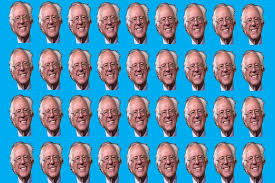 It was just last August that the Democratic National Committee downgraded this controversial group's convention role by not allowing them to participate in the voting unless the nomination process required a second ballot. And since the last Democratic Convention to go to a second round was the one that drafted Adlai Stevenson in 1952, that would seem to have effectively shelved the group's voting power. But has it?

Constituting nearly 30 percent of the vote total needed for nomination, the 2016 superdelegates included 433 DNC members and appointees, 238 members of Congress, 21 governors, and 20 party leaders. Unlike regular delegates, the superdelegates were not bound by the preference of the voters in their respective states' primaries and caucuses. Ultimately, superdelegate votes did not actually alter the convention outcome in that Hillary Clinton had won a majority of the elected delegates but their presence loomed large in the campaign's early days. As Sanders put it in his most recent book, Where We Go from Here, "In 2016, this grossly unfair situation became very apparent when Secretary Clinton received the support of some 500 superdelegates before the first popular vote was cast in the Iowa caucuses." With their meaning and origins remaining something of a mystery for much of the general public throughout the 2016 campaign and judging by their reporting, possibly to some in the newsmedia as well these appointees played a key role in the Clinton campaign's strategy of projecting her as the inevitable nominee, who should only be the subject of praise not competition.

This time around then, with the superdelegates' voting wings clipped and their nature more widely understood, the idea was that no candidate with great inside-party support like Joe Biden, for instance would be able to parlay that into an aura of inevitability comparable to that surrounding Clinton. But still, they're there, which raises the question: Could there actually be a second ballot again, after all these years?

Well, with seven Senators currently in, four current and two past House members, three current and one former mayor, two current and one past governor, one past vice-president, and an author and a tech exec also drawing significant national attention, we're looking at a field so large that they won't all fit in one debate and the Democratic Party has been drawing up regs to decide who makes the show. Some of them will almost certainly be gone before the first delegate is chosen, but could enough of them hang in until the end and deny a majority to any one candidate? Impossible to say now, of course, but the fact is that multiple ballots were once quite common and there seems no reason to rule out their future possibility.

This combined with the fact that a healthy share of big-money Democratic Party donors regard the possibility of a Sanders nomination with intense fear and loathing suggests that we might want to think twice about the possibility of spreading progressive interest and attention out among multiple candidates, no matter how appealing the others may be.

Understandably, turning one's glance away from them may not be easy for a lot of people. After all, Elizabeth Warren has in some cases jumped out even in front of Sanders in the specificity of her solutions for some of the issues his campaign brought to the fore in 2016 college debt relief, free public higher education, and the taxation of wealthy individuals and powerful corporations in addition to venturing into areas such as abortion rights and maternal care that were not the Sanders campaign's bailiwick. In truth, she looks as if she might make an excellent running mate for Sanders were it not for the geographical proximity of their states that will probably rule out such a pairing.

And while Tulsi Gabbard may not bring the same kind of cutting edge policy acumen to the mix and may still need to put more years between her and the reversals of some past positions, the fact is that her current stances are generally excellent, particularly on foreign policy. That, combined with the fact that she's only 38 and has a military background so beloved by the political consultants may tempt more than a few Sanders supporters to want to contribute to the effort to keep her in the mix.

And then there's the unusual case of candidate Mike Gravel, the former Alaska Senator and Vietnam War opponent who allows that he is not actually seeking the nomination and was not counted in the candidate roster previously listed but actually would prefer to see Gabbard or Sanders in that order win it. Among other things, his presence in the mix and his efforts to garner media attention may offer a bit of a tempting lifeline to other publicity-seeking aspirants for lower offices to latch onto. And his overall positions, too, are generally quite fine.

So it's not that this group of other-than-Bernie candidates are a bad bunch. Far from it they are, on the whole, a very good bunch and for the most part any differences we might have with them would be within the normal range of disagreements that inevitably rise when a large range of issues are considered we don't all agree with each other on everything (and there'll, of course, be areas where we'll wish Sanders himself would say or do something differently). Nor is the argument here that we should we feel obligated to fixate on what differences there are. Unaccustomed as we may be to not promoting our own candidate by finding faults in other candidates, this is probably the standard we need to aspire to in our current situation.

So, whether the temptation be to make a modest contribution to one of the other campaigns, give it favorable mention in a poll, or even appear with one of the candidates, this year I find myself saying, "Liz, Tulsi, Mike love ya, but we just can't see each other. Perhaps some other year."

N.B. None of the above should be construed as an argument for abstaining from voting for the Democratic nominee in the final election, should it turn out to be someone other than Sanders or one of the others favorably mentioned.