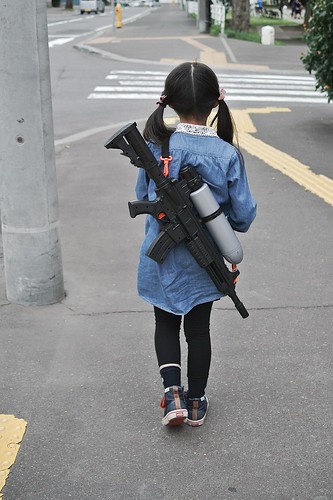 In Iowa, more than a dozen public health, medical, and veterinary organizations are lining up for their annual ritual of killing legislation that would legalize the sale of unpasteurized milk directly from dairy farms to consumers. These opponents say they want to protect individuals, especially children, from becoming ill or dying from raw milk, even though there hasn't been a single recorded death associated with legally available raw milk in the U.S. for more than 15 years.

Where were all these upstanding public health, medical and veterinary professionals a year ago, when the Iowa legislature was in the process of passing legislation designed to strip away various restrictions on gun ownership, including one requiring parental approval for anyone under the age of 21 having access to a handgun? Under the new legislation signed into law last April, any Iowa child of any age can possess a handgun, the only proviso being they be under the "direct supervision" of a parent or guardian. There is one stipulation for the parent or guardian supervisor: "the person"must not be intoxicated or impaired by alcohol or drugs" (I kid you not).

I raise my question not to promote raw milk, but rather to highlight the legislative momentum the pro-gun lobby has created over the last decade, to overrun any and all public health and other concerns about widespread access to guns of all types. As a result, it's now much easier for Iowa's children to legally get their hands on guns than on unpasteurized milk.

Iowa isn't alone in stripping away even minimal existing gun restrictions. It is one of many states that over the last decade have focused on making it easier for anyone, including children and nut cases of all types, to get their hands on guns. Only nine states now retain discretion over whether to grant permits to carry concealed weapons, compared with 29 such states at the start of the 1980s.

The easing of state restrictions on gun ownership has occurred in tandem with an easing of federal restrictions over the last 30 years. A law designed to reduce the sale of assault weapons instituted in 1994 was allowed to expire in 2004, and efforts to re-start it have failed. Federal background checks, first begun in 1968, and reaffirmed in 1993 legislation, have been watered down by not requiring checks of individuals who buy guns at gun shows. A year ago, President Trump signed legislation to lift restrictions on making guns available to the mentally ill. There's more to come from Congress: In the offing is legislation that would ease restrictions on purchase of gun silencers and armor-piercing bullets, as well as easing of restrictions on carrying concealed and non-concealed weapons.

In the wake of the latest school shooting massacre in Florida, I've seen a number of gun-rights advocates inquire on Facebook about why it is that America didn't seem to have the kind of mass gun killings 30 and 40 years ago that it is experiencing ever more frequently these days. The implied answer to the question, which many of these advocates' Facebook friends articulate, is that during the good old days there was less glorification of violence and sex than there is now, along with less drug use, more serious family values, and overall, more respect by children of their elders.

One factor they neglect to mention as a possible explanation for the explosion of school and other massacres is that we have much less regulation of guns today than we had in those "good old days" 30 and 40 years ago. Indeed, the frequency of massacres seems to increase nearly in lockstep with the discarding of the old restrictions.

Would we have as many mass killings if those old-time gun limits were still in place? It's difficult to get informed predictions, since there has been a prohibition on research into gun violence as a public health problem for many years. So, as far as the medical and public health establishments are concerned, raw milk is more of a public health menace than gun violence. Indeed, there's only one way to know for sure what would happen if we reimposed minimal gun restrictions, and that's to go back to those good old days, when minimal gun restrictions were in place, and life was pretty much massacre-free.

Related Topic(s): Approval; Background Checks; Backlash; Drugs; Family; Health; Health; Legislative; Milk; Sex; (more...) Turn_On_Tune_In_Drop_Out; Turner-Ted; Veterinary; Weapons, Add Tags  (less...)
Add to My Group(s)
Go To Commenting
The views expressed herein are the sole responsibility of the author and do not necessarily reflect those of this website or its editors.