King George III of England was not an absolute monarch in the sense that France's Louis "l'Etat c'est Moi" XIV was. But in terms of Great Britain's North American colonies he wielded fairly absolute power, especially when it came to civil matters such as foreign trade and domestic commerce. Throughout the 18th century, the wealthy landowners, slave-holders, businessmen, and foreign traders in the Colonies were becoming more and more restive under his fairly autocratic rule in the matters that concerned them.

When it came to finally putting forth their Declaration of Independence, while the famous part has to do with a declaration of human rights, the bulk of it is concerned with a long series of complaints about George III's polices vis-à-vis everything from "dissolving Representative Houses repeatedly" to "cutting off our Trade with all parts of the world [and] For imposing Taxes on us without our Consent." In other words, in terms of the elements of social, political and commercial life that mattered to the landowners and businessmen, they wanted the absolute control of George III over such matters out of their way. In those matters, he was an autocrat, a dictator, combining all the powers of government, legislative, executive, and judicial significant to them, to himself.

And so, when the Revolutionary War had been won, and the representatives of what was indeed the ruling classes of the newly independent colonies were getting together to establish a new system of governance for themselves, the first effort to do so, the Articles of Confederation , having been found to be inadequate, a new Constitution was written . Its central feature was the clear provision for the separation of the primary powers of government, legislative, executive and judicial, among three branches of government.

At the outset, the Judicial branch was not co-equal in function. But that was "fixed" by Chief Justice John Marshall, who by a series of "if-then" arguments, first in a Supreme Court decision, Marbury v. Madison, arrogated that power of determination of the legality of the actions of the legislative and executive branches to the Supreme Court . Thomas Jefferson, then President, didn't much like the idea of having that kind of Supreme Court "judicial review." It was nowhere to be found in specific language in the Constitution. But politically it was generally accepted. And with a series of subsequent Supreme Court rulings it came to be an unchallenged part of the U.S. tri-partite system, based on the Separation of Powers. 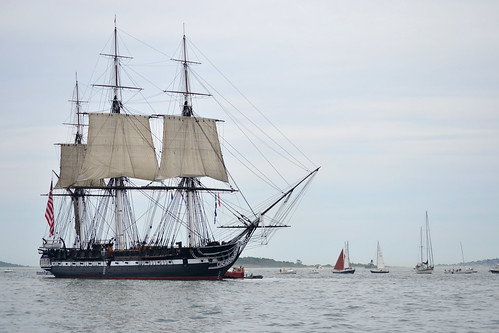 In the 20thCentury, four major dictatorships in capitalist countries came into being, those of Italy, Germany, Japan and Spain. THE major feature of each was, of course, NO separation of powers. Each came to be by a different route. In Italy, the first of the four, the eventual dictator, Benito Mussolini, was appointed Prime Minister, under a Constitution, by the Italian King. In Germany, the dictatorship of Adolf Hitler was established by what was at least a semi-legal vote of the German Parliament, the Reichstag. In Japan, there was a gradual takeover of the parliamentary system, accompanied by a series of assassinations of democratic parliamentary leaders, by various military forces, which eventually led to the imposition of non-parliamentary authoritarian government. In Spain, a clearly fascist dictator, Francisco Franco, rose to power following a Civil War in which he was supported by then fascist governments in Germany and Italy.

The first three regimes fell at the end of World War II. The latter fell apart following the death of Franco in 1975. Whatever their differences, the four major fascist countries (and there were others, like the very first one, Hungary under Admiral Miklos Horthy who had been appointed to his all-powerful position by the Hungarian King), government was characterized by the unification of powers, and in the case of Germany, Italy and Spain, those powers concentrated in the hands and person of one man.

But that couldn't possibly happen here, could it? The Separation of Powers is possibly the most sacrosanct of the characteristics built into the Constitution, isn't it? Well, with Trump in the White House, and facilitators like William Barr, Jim Jordan, Stephen "the powers of the President are to be unchallenged " Miller, Sean Hannity, and etc., hey, you never know. And so, let's for now just look at some of the elements of governing that Trump and his acolytes adhere to, that are indeed characteristics of fascist government and governing. (See previous writings of mine on the subject of Trumpite fascism, e.g. at: https://www.opednews.com/articles/21st-Century-Trumpite-Fasc-by-Steven-Jonas-Class_Fascism_Fascism-Has-Happened-Here_Fascism-Cant-Happen-Here-180206-345.html .) They are presented in non-inclusive summary here. It is a subject with which I have dealt previously, and one to which I obviously will return. For the threat is real.

I. As a businessman, Trump's style was dictatorial. He never had a Board of Directors to deal with and he made all of the major decisions himself. II. He clearly defies the Rule of Law. He challenges the courts in general and certain judges in particular all the time. In registering his compliant that "the courts never rule for us; it never occurs to him that there may be some reason in the law for that. III. Thus the Courts are the enemy at the same time he is packing them. IV. Let's say on some case, like the right/power of one or more Democratic-controlled committee in the House to, under a very clearly stated law, be given his Federal income tax returns, he simply orders the Internal Revenue Service not to comply, and his hand-picked Director and Legal Counsel do as he wishes . Then what? V. Prediction: he will defy one or more Supreme Court decisions that go against him, then what? VI. His favorite actions as President involve those which do not require negotiations with Congress, like pulling out of the Paris Accords on dealing with climate change, scrapping the "Iran Deal," recognizing an Israeli annexation of land belonging to another country, or going ahead on his own when Congress has rejected various parts of his policy, like dealing the situation at the Mexican border (see further just below). Many major national problems, like the crumbling infra-structure and a health care system that is failing millions of people, he just ignores. 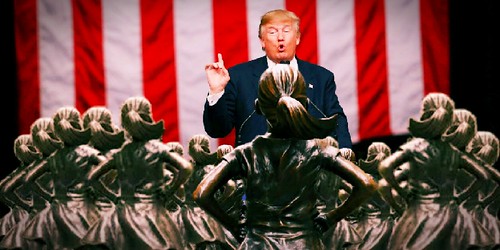 Trumped. For the U.S., still an open question.
(Image by IoSonoUnaFotoCamera)   Details   DMCA

VII. On dealing with the free press, which under fascism is demolished (literally), "Fake News" equals Hitler's "Die Luegen Presse." He has already compiled a "list" of unfavored journalists dealing with the situation at the Mexican border. VIII. Then there are the elements of the artificially created "Border Crisis:" that it is fake, that he is using it in the attempt to establish extra-parliamentary power to, for example, determine what Federal funds are to be spent, that his policy is clearly aimed against "the other" (that is brown people); he is defying both domestic and international law concerning refugees. That is of no matter to him. And if he gets away with this, obviously a test case for him (in his own mind), what might be next of the agenda?

IX. He has established his "Detention Camps," which have the same function as the early "Concentration Camps" in Nazi Germany: the imprisonment of "undesirables" without due process of law. Who's next? Women who have had abortions in states where it is illegal, under laws sponsored by government officials like the self-same Jim Jordan? X. Trump is appointing more and more "actings" to important government positions. They are not subject to Senate confirmation (and the hearings that go with that process of course) and they are much more subject to his whims than are permanent program heads (who of course are being fired by the droves). XI. Then there is Trump's Now Number One, some say Trump's Goebbels, Stephen Miller: sharper and better educated than Trump, great propagandist, and firmly committed to the primacy of the power of the Chief Executive. 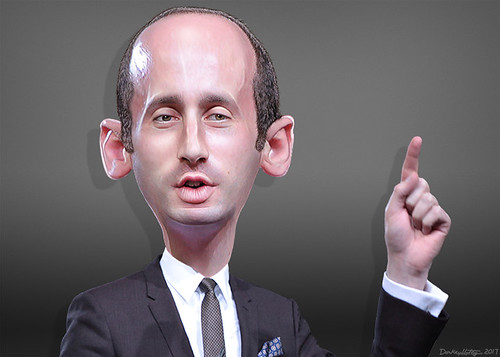 Indeed, I tell ya. The President shall not be challenged (that is, if you know what is good for you!)
(Image by DonkeyHotey)   Details   DMCA

Does Trump obviously hate the central element of the Constitution, the establishment of which the colonists fought so hard to create, the Separation of Powers? Surely. His words and actions demonstrate that every day. Is Trump ready yet to try to completely take over the government, in one way or another, and establish some sort of unitary power (even though it might not appear that way)? Not yet. But he has a great facilitator in the Republican Party should he move evermore in that direction. First, he has helped achieve for them their primary objectives for the 2016 elections: the tax cuts for the rich and the large corporations, the gradual destruction of Federal government regulation of the economy, and the right-wing takeover of the Federal judiciary. Second, they are bound to him electorally. Principles? Nah. Constitutional government, which Repubs. always moan about when a Democratic President is trying to implement a new program that they don't like? Nah. And then, Repub. voters are Trump voters, and the elected Repubs. know that.

Steven Jonas, MD, MPH, MS is a Professor Emeritus of Preventive Medicine at StonyBrookMedicine (NY) and author/co-author/editor/co-editor of over 35 books. In addition to his position on OpEdNews as a "Trusted Author," he is a Senior Editor, (more...)
Related Topic(s): Congress; Democratic; Fascism; Government; History; Hitler; Law; Mussolini; Nazis; President; (more...) Republican, Add Tags  (less...)
Add to My Group(s)
Go To Commenting
The views expressed herein are the sole responsibility of the author and do not necessarily reflect those of this website or its editors.