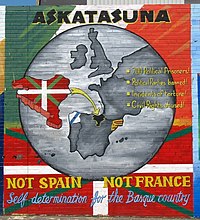 Says it all. And the Basque have their own language too. (As does Catalonia.)
(Image by Wikipedia (commons.wikimedia.org), Author: Ross)   Details   Source   DMCA

Secession is hardly a new idea in U.S. history. It did occur once, of course, and that event led to the First Civil War. But the idea had been raised on a number of occasions before that event. As the Encyclopedia Britannica says:

"Secession, in U.S. history, was the withdrawal of 11 slave states (states in which slaveholding was legal) from the Union during 1860-61 following the election of Abraham Lincoln as president. Secession precipitated the American Civil War. The Confederate States of America consisted of 11 states7 original members and 4 states that seceded after the fall of Fort Sumter. Four border states held slaves but remained in the Union. West Virginia became the 24th loyal state in 1863.

"Secession had a long history in the United States but as a threat rather than as an actual dissolution of the Union. Pro-secessionists found philosophical justification for altering or abolishing a government and instituting a new one in the Declaration ofIndependence. More specifically, those who held that the Union was simply a compact among the states argued that states could secede from that compact just as they had earlier acceded to it.

"While never counseling secession, James Madison and Thomas Jefferson had clearly enunciated the states' rights-compact doctrine in the Virginia and Kentucky Resolutions of 1798. Their political opponents, New England Federalists, briefly considered withdrawing from the Union at the Hartford Convention in 1814. The Mississippi question elicited hints of secession from pro-slavery states, but the famous Missouri Compromise (1820) temporarily quieted the agitation. South Carolinians, however, went to the very brink of secession in the 1830s over the tariff question.

"From the 1840s to 1860, Southerners frequently threatened to withdraw from the Union as antislavery sentiment in the North grew stronger. The Compromise of 1850 eased some of the sectional strife, but the problem of permitting or prohibiting slavery in the western territories continued to inflame opinion on both sides throughout the 1850s.

"The Republican Party [like the present version in name only] formed during this decade around the idea that the territories should remain free; i.e., slaveholding should not be permitted in them. Southerners vowed that the election of a Republican president in 1860 would make secession a certainty. When the Democratic Party disintegrated in 1860 over the slavery-extension question, Lincoln was elected as the first Republican president.

"On December 20, 1860, a special convention called in South Carolina unanimously passed an ordinance of secession. Mississippi, Florida, Alabama, Georgia, and Louisiana followed in January, and Texas voted to secede on February 1, 1861 still more than a month before Lincoln was actually inaugurated. Pres. James Buchanan denied the right of secession, but he also denied the right of the federal government to use force against the seceded states."

We all know what happened in that First Civil War, which the South lost on the battlefield, but actually won in terms of what happened to the prominence of racism/doctrine-of-white-supremacy as a major determinant of national policy in the century-and-a-half since its end. In fact racism is so prominent in national policy that the last Presidential election was won by a man who ran on racism as his primary reason-for-becoming-President. But as is well-known, that President didn't win this time around. But as is also well-known that did not stop him and his political (and para-military) allies from mounting a campaign to overturn the electoral results. And is further well-known, the Trumpites kept losing in court, no matter in how many ways they challenged the results. Which led eventually to a rather bizarre suit, filed directly by the State of Texas in the Supreme Court, challenging the election results in four other states, because Texas claimed that there were irregularities of various kinds in those states which diminished the value of the votes of Texans.

The purpose of this column is not to argue the legal validity of Texas' argument. The Supreme Court unanimously disposed of it pretty quickly. But then something pretty odd happened. A bunch of Trumpublicans© yelled and screamed about "how could the Court" (with three Trump appointees) do that? The yelling and screaming weren't odd. The Trumpists have been doing that all the way alongside their losing one challenging-the-outcome-of-the-election case after another. (And of course Trump has consistently yelled and screamed that he did win and that the election was rigged, and stolen from him --- the "Stab-in-the-Back.) What was odd was that one of them went further, in a pretty odd direction.

Allen West, a far-right wing Republican who had been in Congress for one term in Florida and then fled to Texas to become the chair of the State Republican party, actually proposed that Texas, plus a bunch of states whose Trumpublican© governments had joined the Texas suit, secede. He would quickly deny that that is what he meant. But here is his original statement. You can decide for yourself what he did in fact mean:

"From the Texas Republican Party 'Austin, TX, Release: December 11, 2020. Below is Chairman Allen West's statement regarding the decision by the Supreme Court to dismiss Texas' constitutionally legitimate and critical lawsuit.:

"The Supreme Court, in tossing the Texas lawsuit that was joined by seventeen states and 106 US congressman, has decreed that a state can take unconstitutional actions and violate its own election law. Resulting in damaging effects on other states that abide by the law, while the guilty state suffers no consequences. This decision establishes a precedent that says states can violate the US constitution and not be held accountable. This decision will have far-reaching ramifications for the future of our constitutional republic. Perhaps law-abiding states should bond together and form a Union of states that will abide by the constitution.

Steven Jonas, MD, MPH, MS is a Professor Emeritus of Preventive Medicine at StonyBrookMedicine (NY) and author/co-author/editor/co-editor of over 35 books. In addition to his position on OpEdNews as a "Trusted Author," he is a Senior Editor, (more...)
Related Topic(s): Democracy; Democratic Party; Democratic Values; Election; Racism; Secession, Add Tags
Add to My Group(s)
Go To Commenting
The views expressed herein are the sole responsibility of the author and do not necessarily reflect those of this website or its editors.