It was at lunch with the editor of Harper's Magazine that the subject came up: How does anyone actually live "on the wages available to the unskilled"? And then Barbara Ehrenreich said something that altered her life and resulted, improbably enough, in a best-selling book with almost two million copies in print.  "Someone," she commented, "ought to do the old-fashioned kind of journalism -- you know go out there and try it for themselves."  She meant, she hastened to point out on that book's first page, "someone much younger than myself, some hungry neophyte journalist with time on her hands."

That was 1998 and, somewhat to her surprise, Ehrenreich soon found herself beginning the first of a whirl of unskilled "careers" as a waitress at a "family restaurant" attached to a big discount chain hotel in Key West, Florida, at $2.43 an hour plus tips. And the rest, of course, is history. The now famous book that resulted, Nickel and Dimed: On (Not) Getting By in America, is just out in its tenth anniversary edition with a new afterword by Ehrenreich -- perfectly timed for an American era in which the book's subtitle might have to be changed to "On (Not) Getting a Job in America."  TomDispatch takes special pride in offering Ehrenreich's new afterword, adapted and shortened, for a book that, in its latest edition, deserves to sell another million copies.  Tom 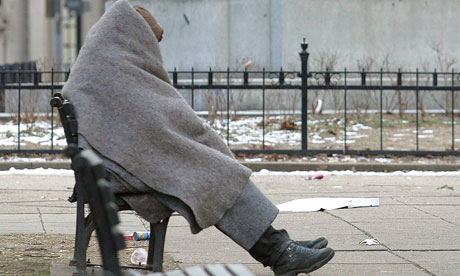 I completed the manuscript for Nickel and Dimed in a time of seemingly boundless prosperity. Technology innovators and venture capitalists were acquiring sudden fortunes, buying up McMansions like the ones I had cleaned in Maine and much larger. Even secretaries in some hi-tech firms were striking it rich with their stock options. There was loose talk about a permanent conquest of the business cycle, and a sassy new spirit infecting American capitalism. In San Francisco, a billboard for an e-trading firm proclaimed, "Make love not war," and then -- down at the bottom -- "Screw it, just make money."

When Nickel and Dimed was published in May 2001, cracks were appearing in the dot-com bubble and the stock market had begun to falter, but the book still evidently came as a surprise, even a revelation, to many. Again and again, in that first year or two after publication, people came up to me and opened with the words, "I never thought..." or "I hadn't realized..."

To my own amazement, Nickel and Dimed quickly ascended to the bestseller list and began winning awards. Criticisms, too, have accumulated over the years. But for the most part, the book has been far better received than I could have imagined it would be, with an impact extending well into the more comfortable classes. A Florida woman wrote to tell me that, before reading it, she'd always been annoyed at the poor for what she saw as their self-inflicted obesity. Now she understood that a healthy diet wasn't always an option.  And if I had a quarter for every person who's told me he or she now tipped more generously, I would be able to start my own foundation.

Even more gratifying to me, the book has been widely read among low-wage workers. In the last few years, hundreds of people have written to tell me their stories: the mother of a newborn infant whose electricity had just been turned off, the woman who had just been given a diagnosis of cancer and has no health insurance, the newly homeless man who writes from a library computer.

At the time I wrote Nickel and Dimed, I wasn't sure how many people it directly applied to -- only that the official definition of poverty was way off the mark, since it defined an individual earning $7 an hour, as I did on average, as well out of poverty. But three months after the book was published, the Economic Policy Institute in Washington, D.C., issued a report entitled "Hardships in America: The Real Story of Working Families," which found an astounding 29% of American families living in what could be more reasonably defined as poverty, meaning that they earned less than a bare-bones budget covering housing, child care, health care, food, transportation, and taxes -- though not, it should be noted, any entertainment, meals out, cable TV, Internet service, vacations, or holiday gifts. Twenty-nine percent is a minority, but not a reassuringly small one, and other studies in the early 2000s came up with similar figures.

The big question, 10 years later, is whether things have improved or worsened for those in the bottom third of the income distribution, the people who clean hotel rooms, work in warehouses, wash dishes in restaurants, care for the very young and very old, and keep the shelves stocked in our stores. The short answer is that things have gotten much worse, especially since the economic downturn that began in 2008.

When you read about the hardships I found people enduring while I was researching my book -- the skipped meals, the lack of medical care, the occasional need to sleep in cars or vans -- you should bear in mind that those occurred in the best of times. The economy was growing, and jobs, if poorly paid, were at least plentiful.

In 2000, I had been able to walk into a number of jobs pretty much off the street. Less than a decade later, many of these jobs had disappeared and there was stiff competition for those that remained. It would have been impossible to repeat my Nickel and Dimed "experiment," had I had been so inclined, because I would probably never have found a job.

For the last couple of years, I have attempted to find out what was happening to the working poor in a declining economy -- this time using conventional reporting techniques like interviewing. I started with my own extended family, which includes plenty of people without jobs or health insurance, and moved on to trying to track down a couple of the people I had met while working on Nickel and Dimed.

This wasn't easy, because most of the addresses and phone numbers I had taken away with me had proved to be inoperative within a few months, probably due to moves and suspensions of telephone service. I had kept in touch with "Melissa" over the years, who was still working at Wal-Mart, where her wages had risen from $7 to $10 an hour, but in the meantime her husband had lost his job. "Caroline," now in her 50s and partly disabled by diabetes and heart disease, had left her deadbeat husband and was subsisting on occasional cleaning and catering jobs. Neither seemed unduly afflicted by the recession, but only because they had already been living in what amounts to a permanent economic depression.

Media attention has focused, understandably enough, on the "nouveau poor" -- formerly middle and even upper-middle class people who lost their jobs, their homes, and/or their investments in the financial crisis of 2008 and the economic downturn that followed it, but the brunt of the recession has been borne by the blue-collar working class, which had already been sliding downwards since de-industrialization began in the 1980s.

In 2008 and 2009, for example, blue-collar unemployment was increasing three times as fast as white-collar unemployment, and African American and Latino workers were three times as likely to be unemployed as white workers. Low-wage blue-collar workers, like the people I worked with in this book, were especially hard hit for the simple reason that they had so few assets and savings to fall back on as jobs disappeared.

Tomdispatch.com is intended to introduce you to voices from elsewhere (even when the elsewhere is here) who might offer a clearer sense of how this imperial globe of ours actually works.
Related Topic(s): American Capitalism; American_Apartheid; Americans Second; Harassment; Homelessness; Jobs; Needy; Welfare, Add Tags
Add to My Group(s)
Go To Commenting
The views expressed herein are the sole responsibility of the author and do not necessarily reflect those of this website or its editors.

On Americans (Not) Getting By (Again)

Tomgram: Pepe Escobar, Who's Pivoting Where in Eurasia?