Earlier articles in this series have dealt with Instant Runoff Voting (IRV), but not because it is a particularly good voting system. Rather it has deserved so much attention because it has such a following and such a popular momentum. Many people understand that plurality voting is an especially poor system but know IRV as the only alternative. But like plurality voting, IRV is a positive voting system and like any positive system, it does not present much of a challenge to the polarized two-party politics that is all too familiar.

IRV does offer the voter the pleasure of voting for a minor party candidate while avoiding the serious negative consequences such a vote might have using plurality voting. It is true that if huge numbers of voters chose to vote for one specific minor party candidate then that candidate could win; but in a polarized environment this is not very likely. Much more likely, the votes for third-party candidates will get converted to votes for one of the major parties, keeping the two-party duopoly alive and perpetually in control.

Clearly there are people who benefit from two-party control and it would not be a huge surprise to find out that a few such people recognize IRV as a terrific way to keep the masses happy while maintaining the two party duopoly. Maybe such people have been funding the drive for adopting IRV, but I do not know of any evidence that this is happening.

A recent article makes the even stronger contention that the intent of anyone promoting IRV is to reinforce the hold of the two major parties on our government. This seems untrue. Most supporters of IRV simply do not recognize its deficiencies and most are not aware of other options. It seems likely that most IRV supporters even hope that adopting IRV will somehow put an end to our two-party system. There is a plausible argument that IRV is an improvement over plurality voting and probably most IRV supporters rest their hopes on that belief while not giving any thought to whether there might be more promising options.

It has recently become commonplace to refer to IRV as "ranked-choice voting". This terminology is inappropriate and confusing because IRV is not the only voting system suggested by that nomenclature. To quote Wikipedia, t he Borda count was developed independently several times, as early as 1435 by Nicholas of Cusa , but is named for the 18th-century French mathematician and naval engineer Jean-Charles de Borda , who devised the system in 1770 . And the article in Wikipedia goes on to describe Borda voting as well as many other voting systems that ask the voter only to rank the candidates. So ranked-choice voting systems have been studied for a very long time and IRV is merely one recent addition to the list.

This should raise the question of why IRV in particular has such a popular following. What does IRV offer, say as compared to Borda Voting? Ballots for the two systems are identical, but surely the iterative counting that is required for IRV is difficult to administer. With Borda Voting (or any of its many Borda-family variations), there is only a single count of ballots and this means that the counting can be distributed geographically with an initial count being conducted at local polling stations and only summary results being forwarded to regional tally centers. This is a significant advantage from the standpoint of ballot security and election integrity, not to mention speed.

With Borda voting, points are assigned to candidates based on the voter's ranking of candidates. If there are five candidates, for example, the top-ranked candidate gets five points, the second ranked gets four points and so on. The points for each candidates are simply summed over all of the voters and the candidate with the most total points wins election.

Do outcomes with IRV ever differ from Borda? An example will settle that question, so let us consider an example election. Suppose there are just three candidates named A, B and C and that (very close to) half of the voters list A as their first choice and the other half of voters show B in first position; suppose furthermore that all voters choose C as their second choice. Notice that this is much what would happen in a polarized political system with A and B heading the two major parties. With IRV, C is eliminated in the first round of counting for being no voter's first choice; the win will go to one of these two major party candidates based no doubt on a trivial number of votes or perhaps on a court battle. Whatever the outcome, close to half of the voters are disappointed and find the outcome to be the worst possible one. Polarization is reinforced.

So what about the Borda count? C is in second place with all (let's say 1000) voters so C gets 2000 points. A and B each get three points from half of the voters so A and B each have point totals of 1500. C wins election and on the whole that seems like the appropriate outcome with everyone getting their second choice.

Arrows theorem suggests that it is also possible to construct an example in which the Borda count results in a dubious outcome, however it does not guarantee that in that same election IRV would ever produce a better result. Someone may produced such an example showing how IRV would be in some example an improvement over the simpler Borda vote count. That certainly is possible but even given such an example it would remain a mystery, given Arrow's theorem, why ranked-choice voting of any flavor should be adopted for real-world use. We do know there is no shortage of better alternatives.

But also a mystery remains as to what has led IRV to gain such popularity. Ranking the votes has a certain appeal because at first glance it appears to give the voter a way to fully express what they want. We've seen in earlier articles the many problems with that, but still ranking candidates does have an intuitive appeal, though that appeal is apt to diminish once you have tried doing it. But even so, why does the more complicated IRV approach to ranked vote counting have so much more popularity than the Borda approach? Is it just it is a more recent idea? 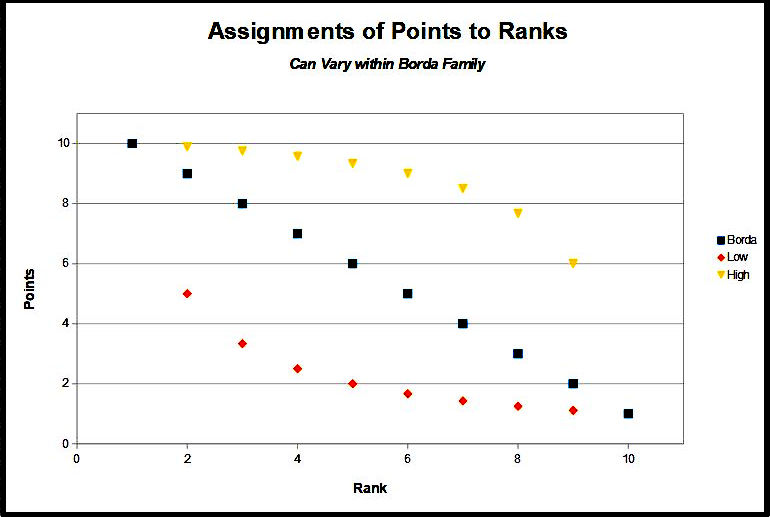 I suspect that academics may be at the root of it. First, there are so many variations on Borda counting, an infinite number in fact (by varying the shape of assignment of points to voter rankings) and really no particularly good reason for choosing just one of them from this large Borda-family of voting systems. That aside, iterative methods are so common in mathematics that IRV has a natural appeal to mathematicians. But this explanation seems a bit dubious as well because mathematicians rarely have much influence on the behavior of society.

While having all of these variations on Borda voting seem to muddy the waters about which one to choose, they do provide a way to conceptualize voting systems more generally. We explore this in the comments below.

A concerned citizen and former mathematician/engineer now retired and living in rural Maine.
Related Topic(s): Voting; Voting Integrity; Voting Reform; Voting Results, Add Tags
Add to My Group(s)
Go To Commenting
The views expressed herein are the sole responsibility of the author and do not necessarily reflect those of this website or its editors.