Having spent eight years telling lies about who the U.S. was fighting in its so-called "War on Terror" (secular governments) and who it was allied with (jihadists), ex-president Obama must now ensure that these lies become part of the "common base line of facts" shared by all Americans. "Fake news" must not be allowed to interrupt the flow of the official (false) narrative. That's how "legacies" are made, and how power is preserved. 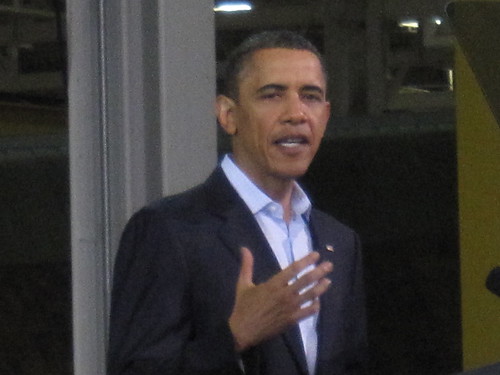 "Obama orchestrated what the late Saddam Hussein would have called "The Mother of All Lies."

The ruling class is seriously rattled over its loss of control over the national political narrative -- a consequence of capitalism's terminal decay and U.S. imperialism's slipping grip on global hegemony. When the Lords of Capital get rattled, their servants in the political class are tasked with rearranging the picture and reframing the national conversation. In other words, Papa Imperialism needs a new set of lies, or renewed respect for the old ones. Former president Barack Obama, the cool operator who put the U.S. back on the multiple wars track after a forced lull in the wake of George Bush's defeat in Iraq, has eagerly accepted his new assignment as Esteemed Guardian of Official Lies.

At this stage of his career, Obama must dedicate much of his time to the maintenance of Official Lies, since they are central to his own "legacy." With the frenzied assistance of his first secretary of state, Hillary Clinton, Obama launched a massive military offensive -- a rush job to put the New American Century back on schedule. Pivoting to all corners of the planet, and with the general aim of isolating and intimidating Russia and China, the salient feature of Obama's offensive was the naked deployment of Islamic jihadists as foot soldiers of U.S. imperialism in Libya and Syria. It is a strategy that is morally and politically indefensible -- unspeakable! -- the truth of which would shatter the prevailing order in the imperial heartland, itself.

"Papa Imperialism needs a new set of lies, or renewed respect for the old ones."

Thus, from 2011 to when he left the White House for a Tahiti yachting vacation with music mogul David Geffen and assorted movie and media celebrities, Obama orchestrated what the late Saddam Hussein would have called "The Mother of All Lies": that the U.S. was not locked in an alliance with al-Qaida and its terrorist offshoots in Syria, a relationship begun almost 40 years earlier in Afghanistan.

He had all the help he needed from a compliant corporate media, whose loyalty to U.S. foreign policy can always be counted on in times of war. Since the U.S. is constantly in a (self-proclaimed) state of war, corporate media collaboration is guaranteed. Outside the U.S. and European corporate media bubble, the whole world was aware that al Qaida and the U.S. were comrades in arms. (According to a 2015 poll, 82 percent of Syrians and 85 percent of Iraqis believe the U.S. created ISIS.) When Vladimir Putin told a session of the United Nations General Assembly that satellites showed lines of ISIS tankers stretching from captured Syrian oil fields "to the horizon," bound for U.S.-allied Turkey, yet untouched by American bombers, the Obama administration had no retort. Russian jets destroyed 1,000 of the tankers, forcing the Americans to mount their own, smaller raids. But, the moment soon passed into the corporate media's amnesia hole -- another fact that must be shed in order to avoid unspeakable conclusions.

"The salient feature of Obama's offensive was the naked deployment of Islamic jihadists as foot soldiers of U.S. imperialism in Libya and Syria."

Presidential candidate Donald Trump's flirtation with the idea of ending U.S. "regime change" policy in Syria -- and, thereby, scuttling the alliance with Islamic jihadists -- struck panic in ruling class and in the imperial political structures that are called the Deep State, which includes the corporate media. When Trump won the general election, the imperial political class went into meltdown, blaming "The Russians" -- first, for warlord Hillary Clinton's loss, and soon later for everything under the sun. The latest lie is that Moscow is sending weapons to the Taliban in Afghanistan, the country where the U.S., Saudi Arabia and Pakistan spent billions of dollars to create the international jihadist network. Which shows that imperialists have no sense of irony, or shame. (See BAR: "The U.S., Not Russia, Arms Jihadists Worldwide.")

After the election, lame duck President Obama was so consumed by the need to expunge all narratives that ran counter to "The Russians Did It," he twice yammered about "fake news" at a press conference in Germany with Chancellor Angela Merkel. Obama was upset, he said, "Because in an age where there's so much active misinformation and its packaged very well and it looks the same when you see it on a Facebook page or you turn on your television. If everything seems to be the same and no distinctions are made, then we won't know what to protect."

"When Trump won the general election, the imperial political class went into meltdown, blaming 'The Russians'."

Although now an ex-president, it is still Obama's job to protect the ruling class, and the Empire, and his role in maintaining the Empire: his legacy. To do that, one must control the narrative -- the subject uppermost in his mind when he used Chicago area students as props, this week, for his first public speech since leaving the White House.

"It used to be that everybody kind of had the same information," said Obama, at the University of Chicago affair. "We had different opinions about it, but there was a common base line of facts. The internet has in some ways accelerated this sense of people having entirely separate conversations, and this generation is getting its information through its phones. That you really don't have to confront people who have different opinions or have a different experience or a different outlook."

Related Topic(s): Obama Administration, Add Tags
Add to My Group(s)
Go To Commenting
The views expressed herein are the sole responsibility of the author and do not necessarily reflect those of this website or its editors.