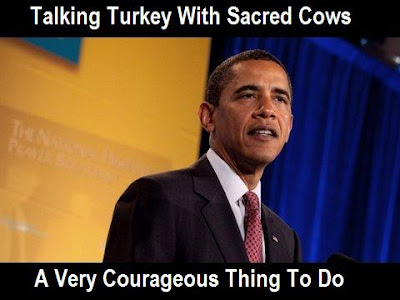 (Image by Unknown Owner)   Details   DMCA
When you're constantly under fire and you have an ounce of courage in you, that courage is bound to sneak out once in a while ... and in the most unlikely of places.


One critic: [on the pronunciation of the word "corpsman"] "Obama doesn't say one unscripted word. There is obviously no one on his staff who knows this word or its correct pronunciation."
To the contrary: depending on the time when they were written, these transcripts show us that more often than not, President Obama does NOT depend upon "teleprompters" (as Fox News would have us believe) and that he might make drastic changes and additions at the last minute, while knowing that those changes may rile some of the audience.
And some of the audience took umbrage with his inclusion of other faiths.


It's ironic, isn't it, that USA Today got the wrong transcript while Pam's House Blend got an accurate one. And who besides USA Today got the "As Prepared For Delivery" outline? Lest we think that someone was being dishonest, I think that it was a mistake. But a very, very lucky mistake: had the sacred cows attending the NDOPB read it, Obama might have had some very uncivil responses hurled at him accompanied by scrambled (if not rotten) eggs.
A "CHRISTIANS ONLY" AFFAIR!:

So which words do you think riled the Christians Only crowd? There are some people seething about terms, words, and ideologies. An article for FOXNews.com (don't worry, I won't go there) was titled The President's Prayer Breakfast Catastrophe By S.E. Cupp (who, BTW, has a new book coming out in April with the title: "Losing Our Religion: The Liberal Media's Attack on Christianity," pass it on). In it, Ms. Cupp derides the President for many things, but what gets her most:

Copyrighted Image? DMCA
The worst misstep of today's speech? When the president said that "God's grace" is expressed "by Americans of every faith, and no faith, uniting around a common purpose, a higher purpose." Uh, no it isn't -- unless my definition of atheism is different than his. Most atheists insist that God's grace most certainly is not expressed through them, and that there are no "higher" purposes. While we may all come together for "a purpose" like relief work in Haiti, poverty, AIDS, or world hunger no atheist I know would consider this God's work.

Ms. Cupp runneth over with equally strident derision throughout the rest of her piece, but always manages to communicate her main theme: This Is A Christians-Only Event and Don't You Forget It! There were other segments of the speech that riled the attendees:

...we all share a recognition -- one as old as time -- that a willingness to believe, an openness to grace, a commitment to prayer can bring sustenance to our lives.

God's grace, and the compassion and decency of the American people is expressed through ... evangelicals at World Relief. By the American Jewish World Service. By Hindu temples, and mainline Protestants, Catholic Relief Services, African American churches, the United Sikhs. By Americans of every faith, and no faith, uniting around a common purpose, a higher purpose.

How DARE he be so inclusive! How DARE he mention atheists and pagans and the like! THIS IS A CHRISTIAN EVENT!!

We see that in many conservative pastors who are helping lead the way to fix our broken immigration system. It's not what would be expected from them, and yet they recognize, in those immigrant families, the face of God.

Is he insinuating that our pastors have no compassion for illegals?

Yes, there are crimes of conscience that call us to action. Yes, there are causes that move our hearts and offenses that stir our souls. But progress doesn't come when we demonize opponents. It's not born in righteous spite. Progress comes when we open our hearts, when we extend our hands, when we recognize our common humanity.

Progress also comes when we open our wallets due to taxing us to death! "Demonize" our opponents? But they ARE demons!

we've turned the faith-based initiative around to find common ground among people of all beliefs, allowing them to make an impact in a way that's civil and respectful of difference and focused on what matters most.

There he goes again! Putting us on the par with every other religion! A subtle dig against us!

Rev. Dan Vojir is has been writing/blogging on religion and politics for the better part of ten years. A former radio talk show host (Strictly Books " Talk America Radio Network) and book publisher, Dan has connected with some of the most (more...)
Related Topic(s): ATHEIST; Christianity; Christians Only; Communication Lecturing Public Speaking; Courage; Gay Bashing; Gay Rights; Homosexuality; Obama Issues Policy; Other Natural Disasters; (more...) People Robertson Pat; President Barack Obama POTUS; Usa Today, Add Tags  (less...)
Add to My Group(s)
Go To Commenting
The views expressed herein are the sole responsibility of the author and do not necessarily reflect those of this website or its editors.