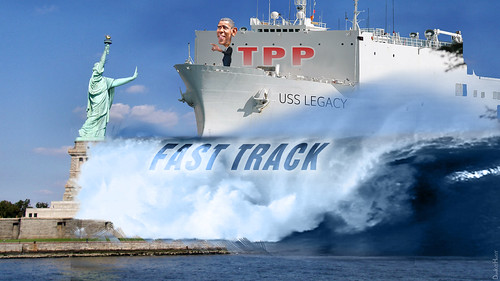 How much is President Obama willing to harm the Democratic Party in order to win approval for the deeply unpopular Trans-Pacific Partnership (TPP) "trade" agreement? We may soon find out.

On Tuesday, Politico broke the story that the White House will be "making an all-out push to win passage of the deal in the lame duck session of Congress, organizing 30 events over the congressional recess." The effort will be designed to put pressure not only on Democratic members of Congress, but also on swing Republican votes, by lobbying important business interests in their districts.

This is pretty big news for the 2016 elections but it seems to have gotten little to no coverage in major media outlets. The TPP has become a major issue in these elections, with Donald Trump highlighting his opposition, and Hillary Clinton -- who had previously supported the agreement -- vowing to oppose it "before and after" the election. (Bernie Sanders also had a major impact on the debate, and possibly on Hillary's change of position, during the primary season). This agreement is especially despised among the white working class voters who have made up the major swing vote in most of the presidential elections of the past four decades.

Trump is far behind Hillary in the polls, and it seems unlikely that President Obama would have launched a public campaign of this magnitude for the TPP in the heat of an election season, if the race were looking like a serious contest. But there is more at stake: millions of potential Republican voters will stay home in November if Trump is losing by a wide margin. Many others will stay home simply because they don't like him. But many of these disaffected voters could be rallied to the polls if they think that Hillary, and her party, are going to bring them another failed "trade" agreement. (On the other side, some potential Democratic voters could abstain or switch sides for the same reasons). All this could make the difference between the Democrats taking the Senate, and in a big enough landslide, even the House of Representatives.

Why is Obama willing to risk so much to get the TPP passed this year? Many press reports insist that it is because he wants it for his legacy. It is strange to think that he would want such an unpopular agreement for his legacy. There are less flattering reasons that seem much more plausible.

The "fast-track" legislation that allows Congress only an up-or-down vote on the TPP, considered essential to its passage, was approved in June 2015 by just a 10-vote margin in the House of Representatives. Only 28 Democrats voted with their president, and they have since come under increasing pressure not to repeat their vote for the TPP. Meanwhile, nine Republicans who voted for fast-track have publicly stated that they will vote against the TPP.

So it is looking like a very close vote. (For procedural and political reasons, Obama will not bring it to a vote unless he is sure he has the necessary votes). Now let's look at one special group of Representatives who can swing this vote: the actual lame ducks, i.e., those who will be in office only until January 3rd. It depends partly on how many lose their election on November 8, but the average number of representatives who left after the last three elections was about 80.

So there you have it. It is all about corruption, and this is about as unadulterated as corruption gets in our hallowed democracy, other than literal cash under a literal table. These are the people whom President Obama needs to pass this agreement, and the window between November 9 and January 3 is the only time that they are available to sell their votes to future employers without any personal political consequences whatsoever. The only time that the electorate can be rendered so completely irrelevant, if Obama can pull this off.

But that is still a big "if," because we still have elections, and Obama has to consider what his campaign to pass the TPP will do to the Democratic Party -- or at least he should. On the other side he has most likely gotten the message that a failure to go all out for the TPP would cause some big money to shift from the Democratic to the Republican party. The most powerful corporations in the country, as well as many actors in the "national security state" want this agreement very badly. It is a coalition of everybody who is anybody. Except for the people.

It's ironic because one of the main purposes of the TPP, like previous "trade" agreements including the World Trade Organization, is to bind the United States to a set of rules that our political leaders would have difficulty putting into law in the US. These include raising pharmaceutical prices by strengthening and lengthening patent protection; allowing corporations to sue the government for regulation that infringes on their profits; and undermining public health and environmental protection, and financial regulation. So by corrupting democracy for this one big, lame-duck vote, our politicians can undermine and limit democracy for many years and even decades to come.

In the next few months, we will see who wins this historic battle.

This column originally appeared in The Hill.

Related Topic(s): Corporations; Democrats; International Trade Agreements; Obama And Tpp, Add Tags
Add to My Group(s)
Go To Commenting
The views expressed herein are the sole responsibility of the author and do not necessarily reflect those of this website or its editors.