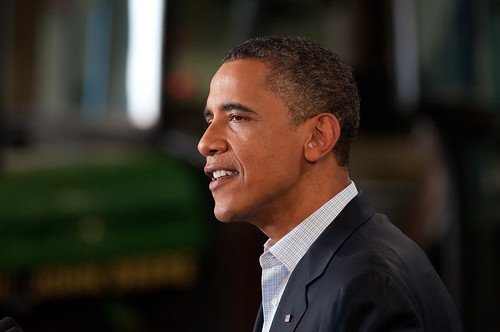 The most important midterm election in a century is fast approaching. Democrats across America are fighting for their political lives. Passionate patriots across the nation are marching in the streets, registering voters, campaigning for candidates, and fighting like hell to end the corruptions and injustices that President Trump and those George Will recently called his poodles in Washington are imposing on America.

From Trump's inauguration until today, while former President George W. Bush has earned widespread praise for speaking out clearly and cogently against major outrages committed by President Trump, former President Barack Obama has remained virtually silent and politically AWOL in the great battle for the future of America in the midterm elections.

There are reports that Obama intends to engage in the campaign soon. If they are true, I will sing his praises. Obama doing a DNC fundraiser is good, but Democrats urgently need a much larger presence on a much larger stage on the big issues that move voters.

Obama must get off the bench, rise to the occasion, join the fight, and act like the leader I fervently supported in 2008 and 2012. Now. Today. Immediately. As Jack Kennedy would do if he were here today. As Robert Kennedy would do. As Martin Luther King Jr. would do. As young people, women and multitudes of people across America are doing.

Pardon my bluntness. At a time of crisis for the country, candor and truth are called for. Instead of giving lavishly compensated speeches to big banks and other special interests to enrich himself, Obama should fiercely defend immigrant children who are subject to callous cruelty from Trump. He should passionately stand up for Dreamers who are treated with ignorance and contempt by Trump.

Obama should stand up for Americans who are economically savaged by disastrous Republican attacks against ObamaCare that is his noble, popular but wounded and endangered legacy. He should stand up for all who fight with courage and conviction for democracy, human rights, and equal justice under law. Now. Today. Immediately.

I am optimistic about prospects for Democrats in November and will soon write a column with an early prediction that Democrats will like. However, Obama should sear into his political soul and remember with crystal clarity what happened to Al Gore and Hillary Clinton -- and to Democrats and America -- when Democrats fall a just tiny bit short in just a few key states. Does Obama want that past to be prologue because he remained AWOL from the great battle for too long?

Obama need not make rousing partisan speeches. He should offer a thoughtful, serious, and presidential-calibre portrait of America appealing to the goodness and conscience of the nation, explaining why Democrats seek to bring our people together, and focusing intelligently on issues of health care, immigration, economic fairness and simple justice.

By Election Day, health care will be a dominant issue. Obama should thoughtfully explain to voters why punishing increases in health care premiums result from obsessive Republican attacks against ObamaCare, and why Trump's attempt to strip insurance coverage from Americans with pre-existing conditions is morally dastardly, sickening and bankrupt.

Obama should explain to voters that no president should ever treat immigrant children like criminals in cages as a matter of policy, or shamefully assert their cases should be decided by monarchical edict without due process or the rule of law.

Obama once told students to take responsibility. So should former presidents. The dark side of Obama's political legacy is disastrous damage to Democrats that left America on the brink of a one-party Republican state dominated by an authoritarian ruler who repeatedly praises foreign dictators and insults democratic allies.

It is wrong, indefensible and unacceptable that the president I fervently supported in 2008 and 2012 gives lavishly paid speeches to big banks with the fierce urgency of now, but refuses to join the epic battle for the future of America until he decides the time is right.

If Obama makes his move soon, great. But time is short. The stakes are enormous. The moment of truth is now. Obama's time of being AWOL must end. It is time for him to report for duty.

Related Topic(s): AWOL; Courage; Democracy; Democrats; Obama Barack; Obama Effect; Obamacare, Add Tags
Add to My Group(s)
Go To Commenting
The views expressed herein are the sole responsibility of the author and do not necessarily reflect those of this website or its editors.